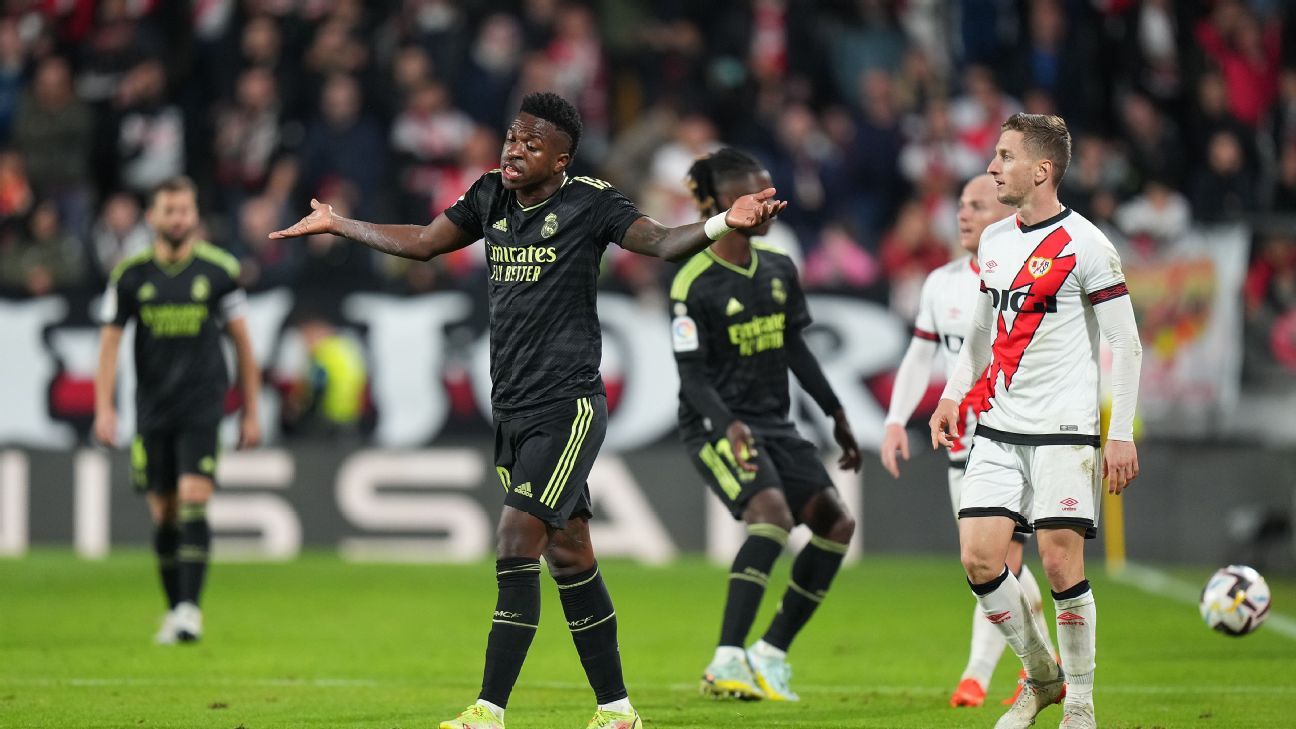 MADRID — Real Madrid suffered their first defeat of the LaLiga season to Rayo Vallecano, who pulled off a shocking 3-2 upset against the reigning league champions.

The loss also sees Barcelona leapfrog Madrid into the top spot of the league table, with all sides having just one more game left to play before the month-long pause due to the World Cup.

Rayo opened the scoring five minutes into the game when midfielder Santi Comesana finished from inside the box but Real went ahead with two goals in four minutes thanks to Luka Modric‘s penalty conversion and Eder Militao’s header.

However, Rayo forward Alvaro Garcia scored the equaliser just before halftime, scrambling home a loose ball. They then clinched the match-winner in the 67th minute after a handball by defender Dani Carvajal inside the area. Real’s Thibaut Courtois stopped Oscar Trejo’s effort but the kick had to be retaken because the goalkeeper left his line too early.

Trejo didn’t waste his second chance, scoring what proved to be the winner with a tidy finish to the goalkeeper’s left.

Barcelona are top on 34 points, two ahead of Real Madrid and ten ahead of third-placed Atletico Madrid. Following their third consecutive win, Rayo climbed to eighth place, two points off the European qualification spots.

This was never going to be an easy night for Real Madrid, away to a ferociously intense, expertly drilled Rayo Vallecano team at the raucous Estadio de Vallecas, and the game was every bit as wild and unpredictable as the LaLiga champions might have feared. A 3-2 defeat — which follows a 1-1 draw with Girona last weekend — leaves Madrid two points behind Barcelona at the top of the table, with just one game left before the World Cup break.

Madrid’s start couldn’t have been much worse, conceding their earliest goal of the LaLiga season so far to Santi Comesana in the 5th minute. If the first-half reaction was impressive, with Luka Modric’s penalty and Eder Militao’s header seeing them take the lead, they never looked entirely comfortable or in control either. Alvaro Garcia scored a deserved equaliser before half-time, and when Rayo captain Oscar Trejo — at the second attempt — beat Thibaut Courtois from the penalty spot, it didn’t really come as a surprise.

A win and convincing display against Cadiz at the Bernabeu on Thursday is now a must. Anything less will see more doubts creep in, with seven weeks to dwell on them before LaLiga returns after Christmas.

2. Vinicius clashes with opponents a worry for Ancelotti

Vinicius Junior has been winning justified praise for his consistently influential, match-winning performances this season, becoming the key man in Madrid’s attack due to the frequent absences of Karim Benzema. There’s been one note of caution though: a concern that the Brazil international is becoming overly susceptible to getting distracted by unnecessary rows with opponents.

There was the high-profile incident earlier this season where Mallorca‘s players and coaching staff were incensed by what they saw as showboating from Vinicius — which at the time felt unfair — but there has also been a growing sense that the 22-year-old forward can be provoked to the point where it starts to affect his focus and effectiveness on the field.

He was booked here for a challenge in the 11th minute and reacted so angrily that referee Juan Martinez Munuera had to have a word with manager Carlo Ancelotti, who in turn asked Vinicius to calm down. He was also targeted by Rayo with rough challenges throughout.

The winger is so talented — and so important to Madrid’s future — that he must learn to expect such treatment. Referees must protect him properly, but it’s also for Vinicius himself to remain laser-focused on punishing opponents where he can really hurt them: by scoring goals and winning games.

Rayo have become one of LaLiga’s most entertaining sides to watch, and much of the fun comes from the flying partnership on their left-hand side, with Fran Garcia at full-back and Alvaro Garcia on the wing. Fran, 23 — a Real Madrid academy product — had quite a night against his former team. He created Rayo’s opener, crossing for Comesana to open the scoring, and then was unfortunate to concede the penalty that saw Modric level at 1-1.

Garcia started the second half by nutmegging Fede Valverde, and later went close to putting Rayo in front with a long-range shot which Thibaut Courtois tipped over the bar. All in all, he was a constant, marauding presence, and a nightmare for Dani Carvajal and Valverde to deal with. Madrid retained 50% of Garcia’s rights when they let him join Rayo and considered bringing him back in the summer as a replacement for the departing Marcelo.

If he continues to develop at this rate, don’t be at all surprised to see him back at the Bernabeu before too long.

So much energy on the left. Has the quality to go on and play at the very highest level.

Conceded the penalty that gave Rayo the chance to take a 3-2 lead, and then ensured that Courtois’ initial save counted for nothing when he entered the box early — in front of the referee — to see the spot kick retaken.

Rayo’s game-winning penalty conversion (on a repeat try) to seal the three points.

Rayo makes it 3-2 over Madrid with just over 20 minutes to play 👀 pic.twitter.com/iyUKakuVcH

After the match: What the managers, players said

Real Madrid’s Carlo Ancelotti: “We lack some freshness, but that’s normal after so many games. If we evaluate this first part of the season we’ve done well. We’ve lost today and the defeat bothers us but we’re doing well in the league and we’re in the Champions League last 16 which was our first objective, we need to finish well against Cadiz and then rest to come back.”

Ancelotti on Vinicius: “I don’t think he had special marking today, he always has special marking. Today he didn’t have the level he’s usually had all season, but nothing special.”

– And then there were two. Madrid’s first loss of the season leaves Paris Saint-Germain and Napoli as the only two undefeated teams in Europe’s top five leagues.

Real Madrid: A quick turnaround to shake off this loss as Cadiz visit this Thursday. Then its the World Cup break until their next LaLiga match on Dec. 31 against Real Valladolid.

Rayo Vallecano: Next up with be Celta Vigo on Thursday at home before the pause in play.