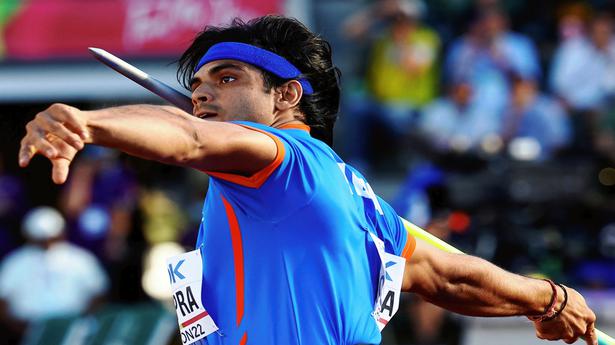 Neeraj pulls out with groin injury

Neeraj Chopra has been ruled out of the Birmingham Commonwealth Games due to an injury he picked up at last week’s Athletics World championships. At the recently concluded 2022 World Athletics Championships, he had claimed silver with a throw of 88.13m. Chopra competed in the finals with strapping on his thigh owing to a groin injury. It is learned that Chopra has been advised a month’s rest. Chopra previously missed out on the entirety of the 2019 season due to an elbow injury which eventually needed surgery. Chopra is the second Indian to win a medal at the Worlds, after Anju Bobby George’s bronze in 2003.

When S. Dhanalakshmi clocked a very impressive 11.26s (joint second in India’s all-time list) for the 100m recently in Turkey and then followed it up with a sterling 22.89s 200m in Kazakhstan, many were stunned. Equally stunning were B. Aishwarya’s 14.14m triple jump, which broke Mayookha Johny’s 11-year-old National record and made her this year’s Asian No. 1, and the 6.73m long jump at last month’s Inter-State Nationals in Chennai. But now, the two stars have failed dope tests and their departure to the Commonwealth Games in Birmingham has been cancelled.

Tokyo Olympics bronze medallist boxer Lovlina Borgohain said she was experiencing ‘mental harassment’ as her preparation for the Commonwealth Games was hampered due to the absence of her personal coach Sandhya Gurung in the Games Village in Birmingham. “It is with a lot of sadness that I say that I have been experiencing a lot of harassment,” Borgohain said in a post on Twitter. The Indian Olympic Association (IOA) took cognizance of Lovlina’s grievance and ensured coach Gurung received her accreditation and room at the Games Village in Burmingham.

Jeswin Aldrin crossed the 8m Commonwealth Games qualification mark with a stunning 8.26m jump at the Federation Cup in April this year. However, in the next three events, he failed to remain consistent and touch 8m. In the final qualifying event for the Games- the Inter-State championship his best jump was 7.71m, while he jumped 7.51m in the finals. Due to this, he was not selected for the Commonwealth Games squad.

Indian high jumper Tejaswin Shankar was cleared to compete at the upcoming Commonwealth Games after the organisers accepted his entry on the request of Indian Olympic Association (IOA), ending a month-long drama surrounding his participation. The organisers had initially rejected Shankar’s late entry but the IOA has now got confirmation from the Commonwealth Games Federation (CGF) and Birmingham CWG organisers about acceptance of his entry after a Delegate Registration Meeting (DRM).

Gymnastics coach Bishweshwar Nandi, who guided Dipa Karmakar to an unprecedented fourth-place finish in the Rio Olympics in 2016, was named as the Indian women’s team coach for the upcoming Commonwealth Games. Bishweshwar replaces Rohit Jaiswal, who was vacated from his position after gymnast Aruna Budda Reddy accused him that he video-graphed her without consent. “I’ve done my biometrics a day before and I am expecting my Visa to arrive by tomorrow. I will join the team by July 29,” Nandi told PTI.