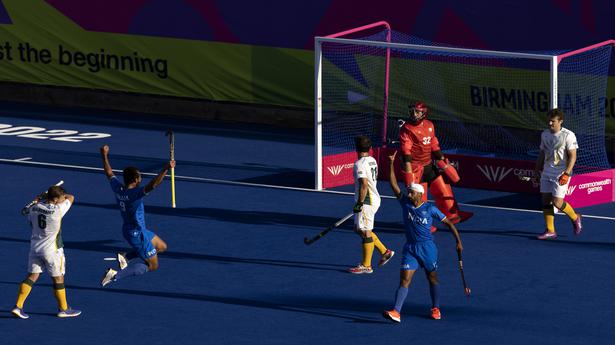 The Indian hockey team guaranteed itself a silver medal on Saturday as it beat South Africa 3-2 in the men’s semifinal of the Commonwealth Games at the University of Birmingham. India, which extended its unbeaten streak against South Africa in the CWG to 4-0, will meet the winner of the other last-four fixture between Australia and England in the final on Monday.

Meanwhile, Tim Drummond nearly committed a howler while trying to lob the ball over the head of India’s Mandeep Singh. The South Africa captain would have heaved a sigh of relief when Lalit miscued an aerial interception.

With about two minutes to go in the first quarter, Ryan Julius made a crucial run down the right but found the athletic Jarmanpreet Singh in his way. Moments later, India earned a penalty corner but South Africa chose to use the referral for a stray foot outside the circle. Due to lack of conclusive evidence, the referee was advised by the video umpire to stand by his original decision, meaning India kept its penalty corner while South Africa retained its referral.

The Indians found it difficult to outrun Dayaan Cassiem as the forward provided a brief moment of scare, charging into the opponent’s circle during a counter-attack. He dribbled past a few Indian defenders but failed to convert. He had a go again a few minutes later but swung way over the head of the Indian ‘keeper.

The deadlock was finally broken in the 20th minute as India’s Abhishek hammered one into the bottom corner, twisting and turning past a clueless Mustapha Cassiem.

Meanwhile, Mandeep got the ball right down the baseline a while later but failed to capitalise. His work upfront and in the midfield was impeccable throughout the game.

Jones’ brilliant form, in the meantime, carried over into the next quarter as the goalie’s left glove came to the rescue when Akashdeep had two shots on goal in the 27th minute.

India extended the lead when Mandeep, in the very next minute, was fed with a long ball down the left, which he netted even as Mustapha was busy appealing to the referee.

South Africa looked a different side immediately after the half-time. It reduced the deficit through Ryan Julius in the 33rd minute as he went for a ferocious swing off a rebound through PR Sreejesh’s legs. The Proteas now enjoyed more possession as compared to the first half.

The save of the day came in the 38th minute as Jones sprawled across to his left to deny Vivek Sagar Prasad, who later injured himself and was carried off the field.

Jarmanpreet took a penalty corner with 20 minutes left on the clock. But thankfully, for South Africa, Jonas pulled off a save again. The team somehow managed to get under India’s skin and that resulted in the suspension of skipper Manpreet Singh for two minutes with a green card.

A battery of defenders dropped back into the Indian half in the opening moments of the fourth quarter as Dayaan scuttled away through the midfield again, hopeful of finding an opening. His attempt went in vain as he failed to find a teammate to direct the pass to.

India lost its referral while trying to look for an offence as Jarmanpreet took a tumble in the dying moments. Mostly a strategic move to take the sting out of the South African attack, India managed to earn a penalty corner, which was effectively converted by Jugraj.

To add to the drama in the dying moments, Mustapha scored with a shot from the left, as the ball took a deflection off Sreejesh into the net, but it wasn’t enough in the end.