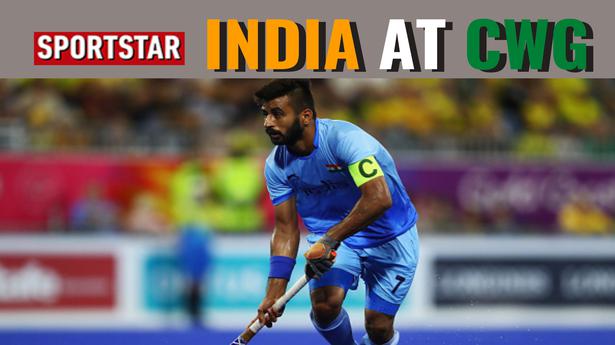 Welcome to Sportstar’s live of the men’s hockey Group B match between India and Ghana. This is Nihit Sachdeva taking you through the action as it unfolds at the University of Birmingham Hockey and Squash centre.

In search of an elusive Commonwealth Games gold, the Indian men’s hockey team will look to start its campaign on a rousing note against lowly Ghana in its opening Pool B match.

The phenomenal success at the Tokyo Olympics, where India clinched a historic bronze after 41 years, has ignited hopes from the Manpreet Singh-led side to stop the Australian juggernaut.

Australia’s dominance at the CWG is a matter of envy as the world No.1 Kookaburras have been the most dominant force in the Games’ history, having won all the six gold medals till date.

Having missed out on a podium finish in the last edition of the Games in Gold Coast, India would be hungry for success here. Going by their form, the Indians can claim the elusive gold.

India’s best results came in 2010 at home (New Delhi) and in Glasgow (2014) where they had finished runners-up. The team finished fourth twice — in 1998 in Kuala Lumpur, where the sport made its debut, and in 2018 in Gold Coast.

The Indian team has improved by leaps and bounds under Australian Graham Reid.

The competition in hockey at the CWG is pretty tough and, besides Australia, the Indians will have to get the better of teams like New Zealand, England, arch-rivals Pakistan and Canada to achieve their goal.

Talking about Sunday’a game, this will be the first time India will play against Ghana since the 1975 men’s World Cup.

The last time the two teams played each other, India had won 7-0. Reid said adapting to the conditions had been a little tough for the side.

“It’s surprisingly cold here. Each day, we get surprised and keep questioning whether the summer is coming anytime soon. Everyone is now settled in. The first few days, we were getting everyone accustomed to everything in the Village so that when the matches start, people are very familiar and comfortable,” he said.

“We focused on getting accustomed to the pitch, the playing conditions, and getting ourselves adapted to the surroundings.” India captain Manpreet said not underestimating any opponent is key to achieving their goal in the Games.

“Our philosophy this time around at the Commonwealth Games 2022 is to ‘zoom out and zoom in’. Our coaches have told us to zoom out and visualise what we have to achieve. We want to win a medal, but how can we achieve the same? “The first thing that we have to do is not underestimate any team,” said Manpreet, who will be playing his 300th international match on Sunday.

“Secondly, we have to ensure that we perform our best match by match and focus on our game plan.” After Ghana, India will take on hosts England on Monday, followed by matches against Canada (August 3) and Wales (August 4).

When and where to watch India vs Ghana, Commonwealth Games 2022 men’s hockey match?

The India vs Ghana, Commonwealth Games 2022 men’s hockey match will be telecast live on Sony Sports Network. Live streaming will be available on Sony LIV from 8:30PM IST.