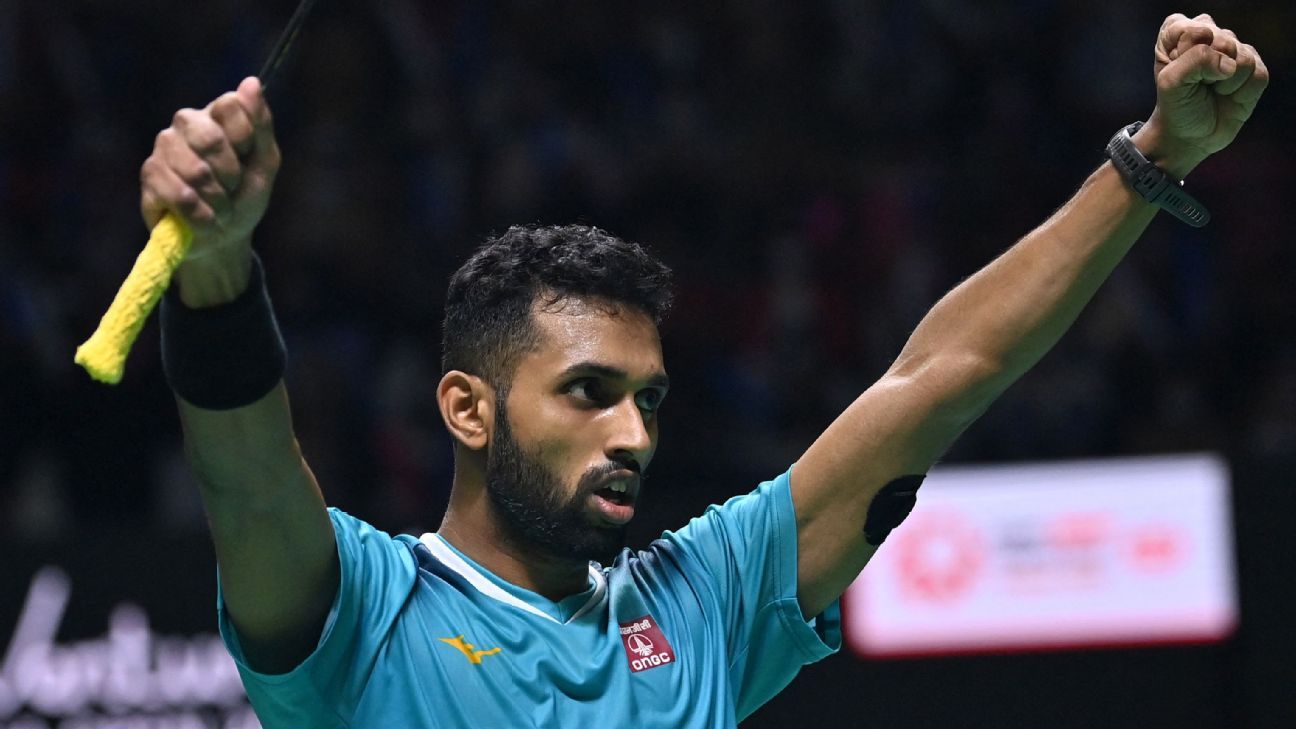 A superlative performance from H S Prannoy saw him make the semifinal of the Indonesia Open with a 21-14, 21-12 win over Denmark’s Rasmus Gemke in just 40 minutes, on Friday. This was Prannoy’s third consecutive win over Gemke, having defeated him at the World Championships last year, before his epic win in the Thomas Cup semifinals a little over a month ago.

After Indonesia’s interest ended with Anthony Ginting’s defeat, the normally raucous Istora Senayan arena bore a deserted look, but there was a pocket of noise welcoming Prannoy and Gemke as they made their way to the court.

Prannoy wasted little time in underlining the rich vein of form he is in, racing to a 5-0 lead as he moved Gemke across the court with a series of disguised drops followed by lifts. The Dane, whose right knee was heavily strapped, was in obvious discomfort, with a lunge at 6-1 worsening his pain.

Yet, it only served to motivate Gemke as he willed himself on, winning five of six points to draw close and make it 9-7. Prannoy didn’t let his opponent generate any further momentum, winning the next two points with smashes into Gemke’s body, taking an 11-7 lead in the interval of the first game.

Gemke’s epic 82-minute win over Kento Momota in his opening game followed by a 48-minute win seemed to have caught up with him. Prannoy offered little mercy, luring Gemke into the net before lobbing him to make it 14-7. Unforced errors crept into Gemke’s game as his intention to avoid long rallies resulted in him opting for risky winners that ended up going wide.

Prannoy displayed an eerie calm throughout, barely celebrating as he crept up to an 18-12 lead. A cross-court smash to make it 19-13 was the first time in the game that Prannoy celebrated – a loud yell and fist-pump underling how pleased he was with his form. In keeping with the story of the first game, Prannoy ended matters with a no-look cross-court smash that fooled Gemke into moving the wrong way, taking the first game 21-14.

It was an error-strewn start to the second half as both players struggled to deal with the drift and floated lifts well over the backcourt. Gemke was far more explosive this time around, keeping pace with his opponent as they were evenly matched at 6-6. Prannoy’s attempts at twisting and turning Gemke bore fruit, but Gemke profited from some well-judged leaves to keep it tight at 9-9.

Like the first game, Prannoy inserted some aggression into his game with two smashes to lead 11-9 at the interval. RMV Gurusaidutt, former bronze medallist at the 2014 Commonwealth Games, now transitioned into coaching, was on hand to keep Prannoy focused during the break, asking his 29-year-old compatriot to ‘keep patient’ and not rush things at the net.

Prannoy seemed to have absorbed the idea, immediately forcing Gemke into a long rally despite the Dane’s attempts at winners. He was able to return almost all of Gemke’s smashes, with deftly judged returns prolonging rallies until Gemke was forced into errors. There was a brief moment of concern at 13-11 when it appeared that the Indian had jarred something around his ankle, but a quick check and Prannoy was ready once more.

Gemke attempted to force the issue with fast net exchanges, taking the next point. There were no chants of ‘H.S.P.’ like in the Thomas Cup, but an errant ‘Come on Prannoy’ from the crowd seemed to awaken something within the Indian. A ruthless streak followed as Prannoy unleashed his full arsenal of drops and smashes, moving Gemke all around the court, and made the Dane lunge at the net before unleashing a smash at the other end.

Prannoy rattled off seven straight points to make it 20-12. A nonchalant, dipping flick across the court in the match point resulted in Gemke only managing to find the net as Prannoy sealed the game. The calm disappeared and Prannoy’s fist-pumps were on display once more as he celebrated a comprehensive win.

This is Prannoy’s first semifinal since the Swiss Open in March, close on the heels of his Thomas Cup heroics in May, and there’s the sense that the 29-year-old, whose body has let him down constantly throughout his career, might finally be achieving a semblance of consistency.

A tricky semifinal against Zhao Junpeng of China awaits him, but even if the result isn’t favourable, Prannoy can look back at a tournament where the rest of his compatriots bowed out early, in a positive light. Whisper it quietly, but HS Prannoy might be well and truly back.