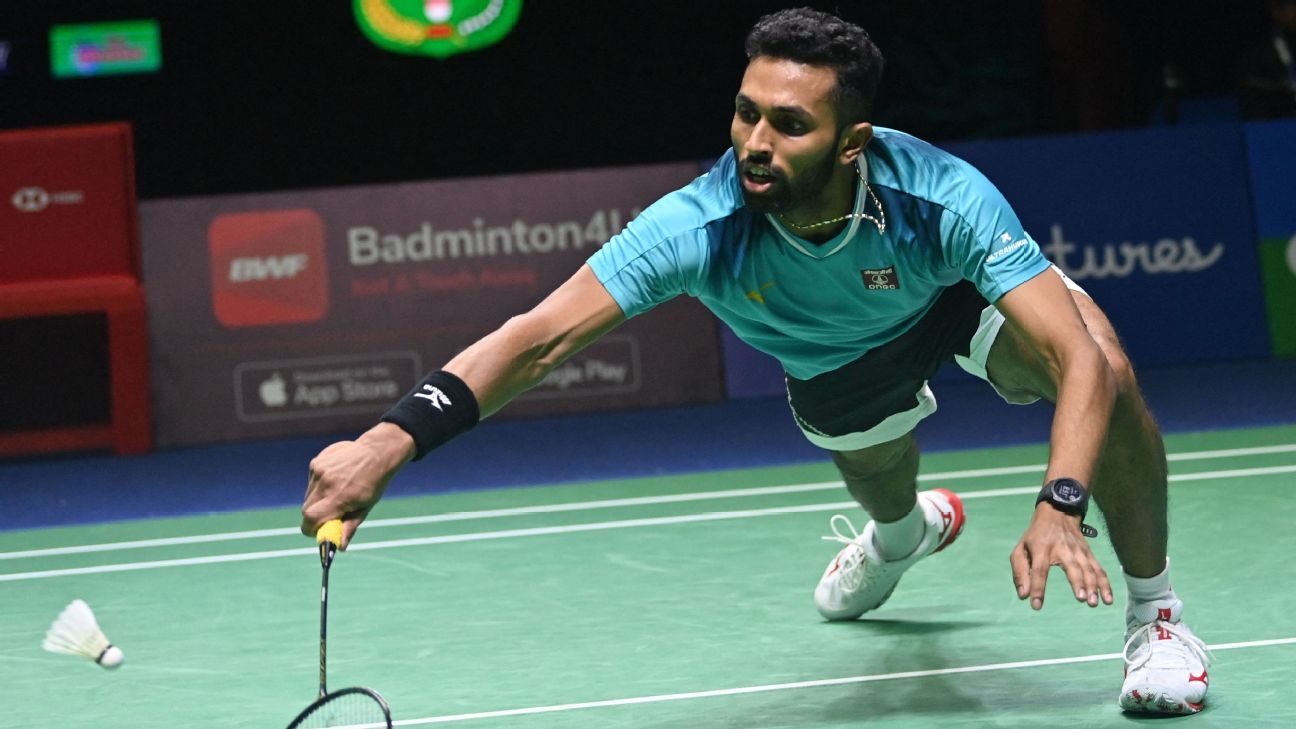 HS Prannoy’s superb run at the Indonesia Open came to an end in the semi-finals on Saturday, as China’s world No 35 Zhao Jun Peng beat him in straight games. It ended what was a mixed bag of a Super 1000 tournament for Indian badminton.

World No 23 Prannoy couldn’t maintain his rhythm to lose 16-21, 15-21 in 40 minutes to the left-handed Zhao, who is a a two-time bronze medallist at the World Junior Championships. The Indian struggled for precision and control throughout the two games and lost a steady lead in the second to go down in straight games. This was his second semi-final finish at the Indonesia Open, after he had lost at the same stage in 2017.

Jun Peng started with a swift 3-0 lead before Prannoy got on board but the Indian committed one too many errors to begin the match. Prannoy then built some momentum with a deft flick and a body smash but more errors meant his Chinese opponent went into the mid-game interval with a sizeable 11-6 lead. 29-year-old Prannoy seemed a little nervous as his net play was not as polished and he also lacked his trademark control on the shuttle.

The second half saw Prannoy begin with intent and he briefly looked to dictate the pace in rallies and narrowed the deficit to 14-16 with the help of some good strokes. He was able to build some aggressive points that Jun Peng couldn’t return, but was unable to do it consistently. He let the momentum slip as another wide shot and a long return took Jun Peng to 19-15 as he grabbed five game points with a cross court smash after trapping Prannoy into a corner.

Prannoy saved the first with an on-the-line winner but Jun Peng sealed it in the second chance with another accurate smash in 18 minutes. After the change of sides, Prannoy started constructing his rallies better after getting on board with a wonderful point at 2-1. He then took the lead with lovely disguise as his game started clicking. He was forcing errors with his aggressive returns but once again, his own string of unforced errors proved to be his undoing in what was a neck-and-neck second game till 7-7.

From 7-7, Jun Peng pulled to a 11-7 lead as Prannoy miscued his strokes which ended up going wide or at net and then held on to the advantage.

After the break, the Chinese southpaw looked in complete command as Prannoy struggled with his control, sending the shuttle to the net repeatedly.

Soon Jun Peng was up 17-9 after Prannoy lost a video referral but a glimmer of hope appeared as the Chinese star suddenly dropped his intensity closer to the finish line. Prannoy, however, couldn’t pounce on the errors and another wide return gave his opponent eight match points.

Prannoy saved three before Jun Peng produced a precise down-the-line smash on his rival’s forehand back corner to make his first final of a World Tour event. He will play world No 1 Viktor Axelsen in the final, who is on an unbeaten run in Jakarta.

For Prannoy though, this week had its fair share of positives despite the lopsided loss. He was the best performing Indian by a fair margin and made the final four in a section that had eighth seed Lakshya Sen, who he beat in the opener, as well as former world No 1 players Kento Momota and Kidambi Srikanth.

The world No 23 is still working his way back to the top after injuries and the pandemic, but after reaching the final of the Swiss Open earlier this year and then playing a starring role in India’s Thomas Cup victory, it’s fair to say that a regular place in the deep end of a tournament is not too far away.