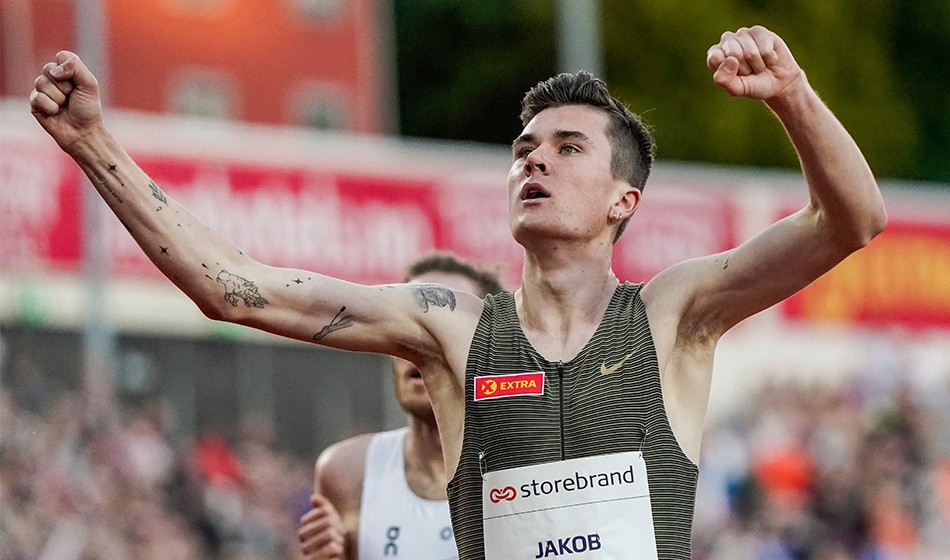 Norwegian runs 3:46.46 to narrowly miss long-standing European mark in the Dream Mile at the Bislett Games on Thursday

In the Dream Mile in Oslo in 1985, Steve Cram smashed the world record with 3:46.32 as he strode away from Seb Coe and Jose Luis Gonzalez in majestic style. In later years the Jarrow Arrow would rue the fact he did not run harder that night and told AW that he felt he could have run two seconds quicker that night. Regardless, his mark has stood the test of time as the European record for 37 years.

On a damp night in Oslo on Thursday night it survived its biggest attack yet as the Olympic 1500m champion Jakob Ingebrigtsen came within 14 hundredths of a second of the record. With super-spikes on his feet, a partisan Bislett Stadium crowd roaring in his ears and Olli Hoare of Australia and Jake Wightman pushing him from behind, he clocked 3:46.46 to narrowly miss Cram’s mark.

Still, it was a Diamond League record, Norwegian record and world lead, in addition to being a reminder of how durable Cram’s mark is, not to mention Hicham El Guerrouj’s world record of 3:43.13 too.

Following pacemaker Mounir Akbache through 400m in 56.01 and Boaz Kiprugut through 800m in 1:53.30, Ingebrigtsen took control on the third lap as both himself, Hoare and Wightman drew away from the rest of the field. On the final lap he threw everything into his assault on Cram’s mark and pulled away from Hoare in the final 200m, but the Wavelight pacing system was always a metre or two ahead of him and he had to settle for the fastest time in the world since 2001 and a time that puts him No.6 on the world all-time rankings.

Behind, Hoare ran an Oceania record of 3:47.48 while Wightman broke Graham Williamson’s 40-year-old Scottish record with 3:50.30, although Josh Kerr has run slightly quicker indoors. Another Brit, Neil Gourley, was fourth in a PB of 3:52.91 in a race that once again lived up to its name.

“It was an awesome crowd so now I will prepare myself well for Eugene. Oslo is always perfect and for me, it’s the best meeting in the world so it was awesome experience. Last year I was sick so couldn’t race here unfortunately so it was even more special here tonight, as was to be the first Norwegian to win the Dream Mile – doing things nobody else has before is really great.”

Elsewhere in the men’s events in Oslo, Mondo Duplantis delighted the crowd with aa 6.02m victory. “I felt good jumping despite it being a hectic day with the rain coming on and off – it was tiring coping with that but I’m happy with 6.02m,” he said.

“It was too long a competition for my legs so I ran out of steam, but the energy from the crowd was good, they helped a lot. It was cold but it wasn’t so bad under the circumstances. I only have the Stockholm Diamond League now ahead of the World Championships and I feel good ahead of the big dance.”

There was no Karsten Warholm in the 400m hurdles due to injury but in his absence the event was won in scintillating style by Brazilian talent Alison dos Santos in 47.26. Rasmus Magi of Estonia was second but well over a second adrift.

Behind the ‘green flood’, Joe Klecker of the United States was fourth in 13:04.92 followed by Milkesa Mengesha of Ethiopia, Jack Rayner of Australia and Adel Mechaal of Spain – the latter two running PBs of 13:06.00 and 13:06.02 respectively.

There was no joy for Britain’s Sam Atkin, though, as he dropped out along with local star Filip Ingebrigtsen.

Pawel Fajdek of Poland threw 80.56m to win the men’s hammer. It was a Diamond League record, breaking the 80.28m mark that he set himself at the Pre Classic in 2016.

Kirani James carried on his good 2022 form with another 400m victory in 44.78. Similarly, Miltiadis Tentoglou of Greece won the long jump with 8.10m from Thobias Montler’s 8.05m. 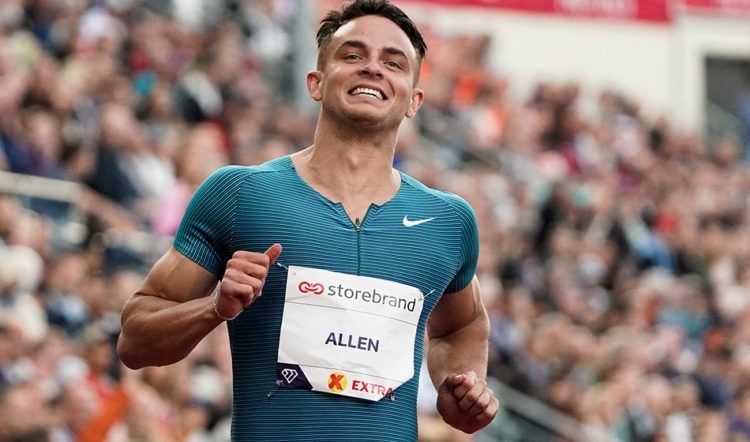 Sprint hurdles sensation Devon Allen did not show any signs of jetlag either as he stormed to a 13.22 (-1.2) win in the cool and thundery conditions.

Andre De Grasse, the Olympic 200m champion from Canada, took the 100m in 10.05 (0.5) with Britain’s Reece Prescod just one hundredth of a second behind.

In the innovative ‘Race to Zero’ that pitted sprinters in various para categories against each other over 100m, Salum Ageze Kashafali – a visually impaired athlete from Norway – won in 10.57.