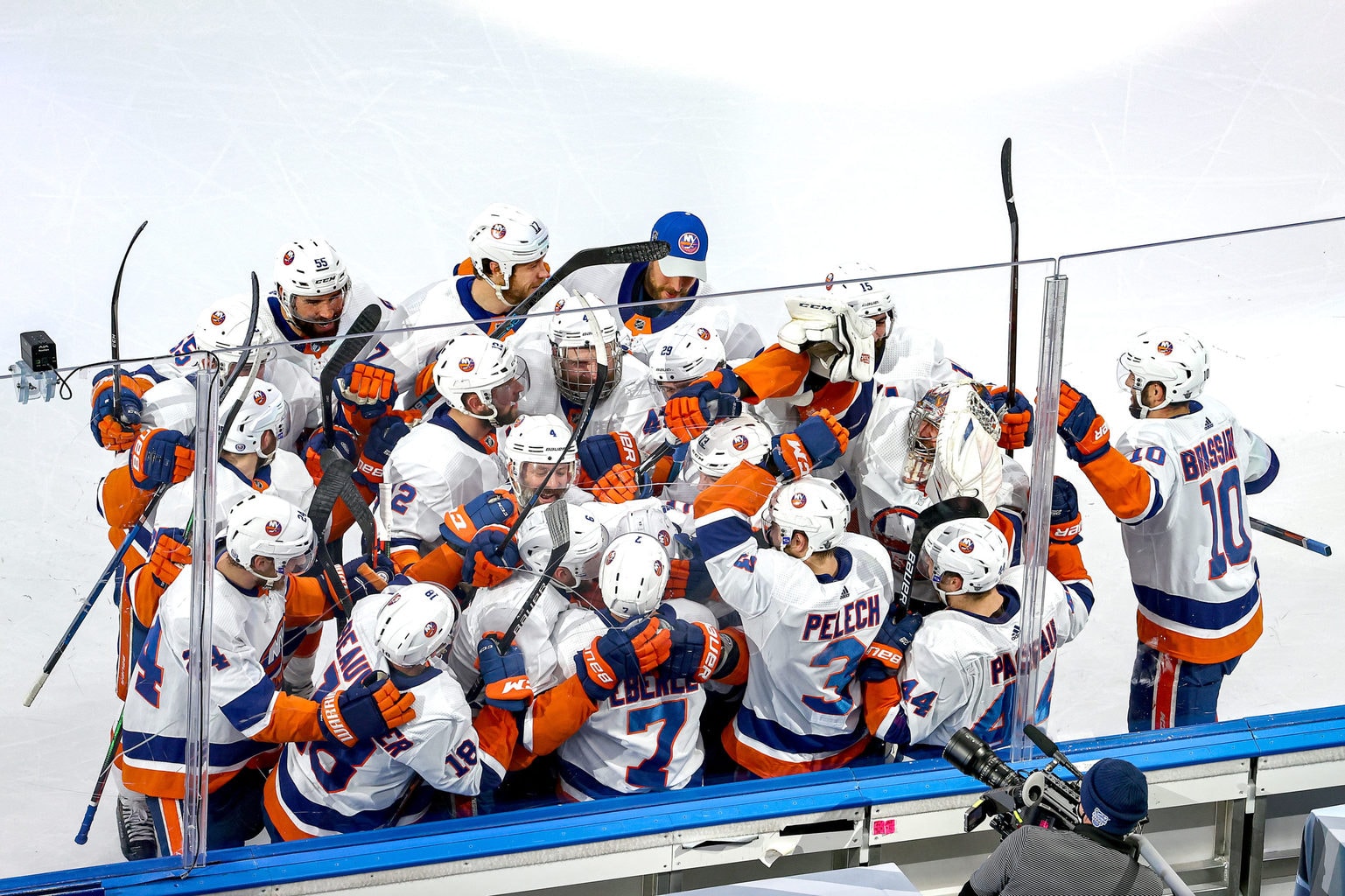 One year ago, the New York Islanders were going toe to toe with the Tampa Bay Lightning in the Stanley Cup Semifinal. They lost the series in seven games to the eventual Stanley Cup champion but there was plenty of optimism, considering how the team played. Instead, the Islanders took a step back this season with some of the underlying weaknesses of the roster not only getting exposed but resulting in a season where they missed the playoffs altogether.

As a result, general manager (GM) Lou Lamoriello fired head coach Barry Trotz and replaced him with Lane Lambert behind the bench. In addition, the team is facing a consequential offseason where they not only have to bounce back but become one of the best teams in the league.

The roster is built to compete but some glaring issues leave them a considerable distance from winning the Stanley Cup. The Lightning and the Colorado Avalanche, the two teams playing in the Stanley Cup Final, have provided an outline for teams looking to win the Cup and the Islanders particularly, can learn a lot from the two teams.

Defensemen & Their Impact in the NHL

The success of the teams in today’s game coinciding with two-way defensemen is uncanny. The ability to have a skater that can not only create turnovers in the defensive zone but handle the puck and start up the offense in transition while also opening up the offense from the point has given teams a distinct edge. Both Cale Makar and Victor Hedman embody the ideal defenseman and lead not just their units but their teams, with Makar noticeably standing out from other great defensemen. However, what stands out with the Avalanche and Lightning is how their defensive units are built.

The Avalanche pair Makar with Devon Toews, another great two-way defenseman that can not only skate with the best forwards in the game but generate offense from the point. However, aside from their scoring defensemen, they also added size and defensive discipline to the unit with Erik Johnson, Jack Johnson, and Josh Manson. While the Lightning don’t pair Hedman with a two-way defenseman, the unit still possesses another playmaker in Mikhail Sergachev who helps out the team in the defensive and offensive zone alike. Similarly, their defensive unit is well-rounded with Ryan McDonagh, Jan Rutta, and Erik Cernak removing opponents from the puck and forcing turnovers.

The Islanders have two great defensive defensemen in Adam Pelech and Ryan Pulock. Additionally, Noah Dobson has emerged as a great young defenseman who can open up the offense from the point, scoring 13 goals and 38 assists this season in a breakout year. Unfortunately, the Islanders’ defense not only struggled to find an ideal pairing for Dobson but was significantly slower with Zdeno Chara and Andy Greene struggling to keep up with the speed of the opponents. As a result, the team’s defense was good but a step behind and not at the same level as some of the elite teams in the NHL.

The Islanders need to improve the defense but fortunately, have the avenues to recreate a great unit. The top priority is understandably, to acquire a defenseman this offseason, one that can play alongside Dobson and provide the team with a great two-way pairing for years to come. Likewise, the Islanders can also see if the young defensemen from the prospect pool, particularly, Grant Hutton and Robin Salo, are ready for the NHL and as great skaters, provide the team with a well-rounded defensive unit.

Four of the last five Stanley Cup champions averaged over three goals per game in the regular season, with the 2018-19 St. Louis Blues being the exception. In a league where goals were up and offense plays a greater role in a team’s success, the teams that ultimately win the Cup have the best offenses. In recent years, the Islanders, who haven’t scored over three goals per game every year since the 2017-18 season, were trying to be the exception and not the rule for a championship-caliber team, carried by a defense-first mentality.

The finalists this year have showcased throughout the season their potent offenses and the ability to constantly find the back of the net, with the Avalanche scoring 3.76 goals per game and the Lightning scoring 3.48 goals per game. Moreover, both teams have been led by some of the best goal scorers and start skaters in the game including Nathan MacKinnon, Gabriel Landeskog, Nikita Kucherov, and Steven Stamkos just to name a few. The two teams have the star players to put their offenses over the top but also lift their forward units if the team is struggling.

For the Islanders, a few players who they thought would step up have either failed to live up to the expectations or have struggled in their different roles. Mathew Barzal struggled to carry his forward shift and without a sharpshooter like Jordan Eberle on the wing, had a difficult time creating open shots for the offense. Likewise, Anthony Beauvillier was expected to take a step forward as one of the better puck-handling skaters on the team but instead struggled to find a place in the forward unit. The Islanders have talented skaters but even if some players bounce back next season, the team still needs a star scorer, someone who can consistently and reliably score 30 goals in a season.

The lack of a star scorer on the roster makes acquiring Johnny Gaudreau or Filip Forsberg another need for the Islanders. Even in the years where the team reached the Semifinal, their undoing, aside from being blanked by goaltender Andrei Vasilevskiy and the Lightning defense, was the ability to find offense and win high-scoring games. When games became high-scoring, offensive battles, the Islanders would struggle to keep up.

Aside from the offense, and playmaking from the point, something that always separates championship teams from the pack is their ability to adapt and win in all situations. The Islanders proved they can win goaltending duels, low-scoring games, and slow-paced matchups where teams have to chip the puck into the offensive zone to start up the offense. The problem was once games sped up, they struggled and as a result, they tried to slow games down to win, especially in the playoffs. This issue became prominent against the Lightning when they won three games in the 2021 series but never scored more than three goals in a game.

Fortunately, the team has a handful of versatile players who can play in all types of games and play multiple roles. Jean-Gabriel Pageau is a remarkable two-way center who can handle the puck on rushes while Brock Nelson thrives best on the rush in space but can also create scoring chances in the offensive zone when the game slows down. However, the Islanders still need to find that speed and versatility throughout their lineup and both the forward and defensive unit.

Moreover, the ability to change up the line combinations and succeed is pivotal to success in the NHL. The Lightning moved Ondrej Palat, Stamkos, and Kucherov to the same shift against the New York Rangers, and the move has paid off immensely. The Islanders, on the other hand, have a lot of players whose success depends on the skaters they play alongside, and it’s an issue that will continue to plague them not just in the regular season but in the playoffs.

Where The Islanders Are at a Cup Level

Despite the significant obstacles that separate the Islanders from the two finalists, the team is closer to competing for the Stanley Cup than most rosters in the league. For starters, the team has great goaltending. Led by one of the best young goaltenders in the game in Ilya Sorokin, the Islanders have proven stability in the net and likewise, have a veteran in Semyon Varlamov on the roster with a playoff pedigree, helping the team advance to the Semifinal in 2021.

The Islanders also have a great defense, led by Pulock, Pelech, Dobson, and Scott Mayfield, that can limit and potentially eliminate even the best offenses in the NHL. Lastly, the team has depth in the forward unit and in particular, a great checking line led by Casey Cizikas and Cal Clutterbuck. It’s difficult to win in the NHL and remain a competitive team. However, the Avalanche and Lightning have provided a blueprint for success, one that the Islanders can replicate.