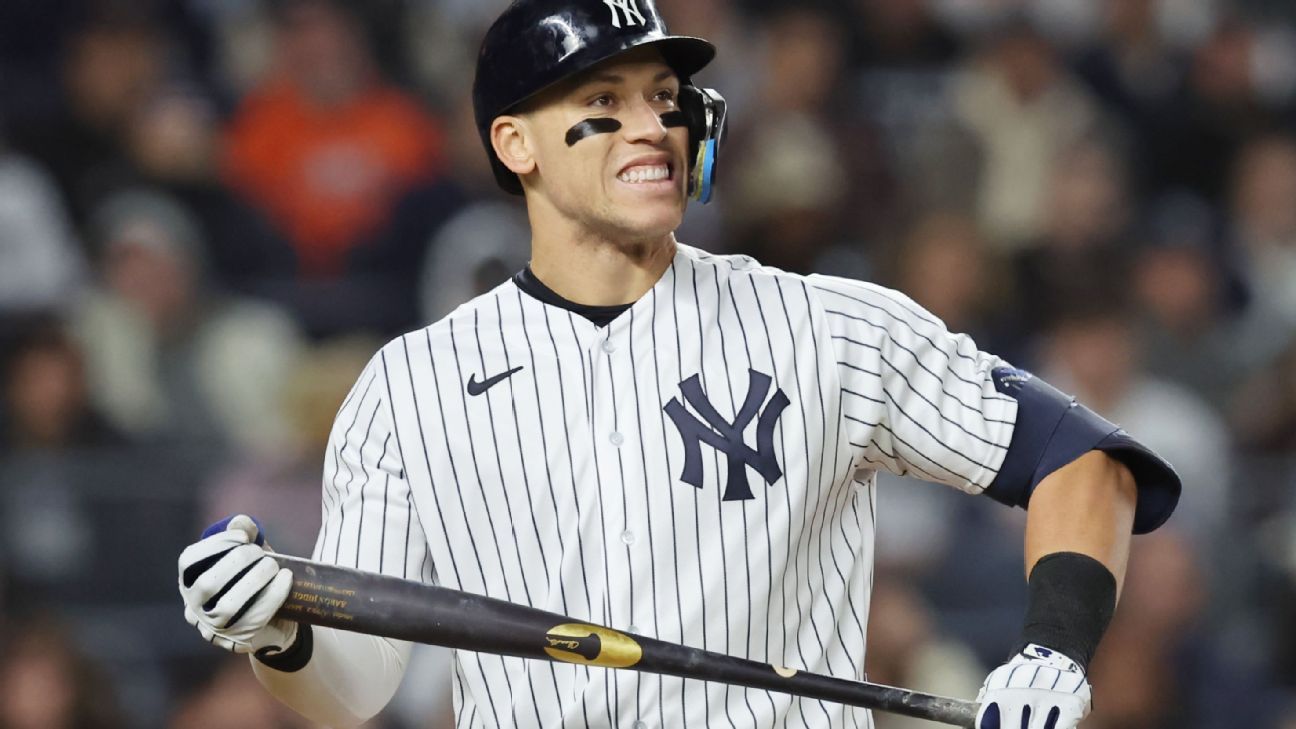 In the next phase of a historic American League MVP race, Aaron Judge of the Yankees and Shohei Ohtani of the Angels led the list of finalists for Major League Baseball’s BBWAA Awards, according to balloting results revealed on Monday night.

Calling the seasons put up by Judge and Ohtani historic is almost an understatement.

Judge set a new American League record with 62 homers during a season-long race that captivated the baseball world all summer. He also posted AL-best figures in RBI (131), runs (133), walks (111), on-base percentage (.425) and slugging percentage (.686). He also finished second to Minnesota’s Luis Arraez in the AL batting race, just missing a clean sweep of all of his league’s major batting categories.

That kind of showing would make a player a unanimous MVP choice in most seasons, but Judge has to contend with the Ohtani, whose unprecedented success in a dual role as a hitter and a pitcher perhaps reached another level this season.

After becoming an unanimous choice as the AL’s MVP a year ago, Ohtani followed it up by hitting .273 with 34 homers, 95 RBI, 90 runs and 11 stolen bases. Meanwhile, he got even better on the mound, going 15-9 with a 2.33 ERA and 219 strikeouts while staying on the perimeter of the AL Cy Young conversation.

The unfortunate No. 3 finalist in this MVP chase is fearsome Houston slugger Yordan Alvarez, who hit .306 with a .406 on-base percentage and a .613 slugging percentage, ranking second in all three categories. He hammered 37 homers, drove in 97 runs and scored 95.

If, as expected, Alvarez finished a distant No. 3 in the balloting, he will be able to take solace in the euphoria over his go-ahead three-run homer in the Astros’ World Series clincher on Saturday, an epic 450-foot blast off the Phillies’ Jose Alvarado.

A pair of Cardinals seeking to get over the MVP hump are among the three finalists for the NL award.

St. Louis 1B Paul Goldschmidt has finished in the top 10 of NL MVP balloting six times, including four in the top five, but is seeking to win the award for the first time.

Goldschmidt put up a monster season and had a chance to break an 85-year drought for NL Triple Crown winners late into the season. He hit .317 with a .404 on-base percentage an NL-high .578 slugging percentage, slamming 35 homers, driving in 115 runs and scoring 106 times.

Across the diamond, Cardinals third baseman Nolan Arenado is also an MVP finalist. Like Goldschmidt, he’s never won the award but gotten plenty of support with five previous top-10 finishes. This is his second time finishing in the top three.

Arenado hit .293 with 30 homers and 103 RBI while winning NL Gold Glove honors at third base for the 10th straight time.

Machado hit .298 with 32 homers with 102 RBI and 100 runs scored, all totals in line with the annual production that he’s put up during his 11-year career. He has finished in the top five of MVP balloting three previous times, twice in Baltimore and once for the Padres. He finished third in the voting after the 2020 season.

The AL Cy Young race is down to a perennial contender and two new faces on the awards contention circuit.

The familiar face is that of Houston ace Justin Verlander. After making just one start over the 2020 and 2021 seasons because of an elbow injury, Verlander returned as good as ever for the champion Astros. He led the AL in wins (18) and ERA (1.75), the latter figure the best of a 17-year career that will likely land Verlander in the Hall of Fame.

Verlander is no stranger to postseason accolades. He is bidding to become just the 11th pitcher to win three or more Cy Youngs, having won the award in 2011 and 2019.

The newbies in the race are righties Dylan Cease of the White Sox and Alek Manoah of the Blue Jays.

Cease’s gradual improvement as a big-league starter led to a breakout performance this season. He went 14-8 with a 2.20 ERA and struck out 227 batters. Manoah was 16-7 with a 2.24 ERA, throwing 196 2/3 innings while showing signs of become an old school-type of rotation workhouse.

Marlins righty Sandy Alcantara is a first-time top 10 finisher in the race for National League Cy Young honors. Considered by many to be the favorite for the award, Alcantara produced a throwback season in which he went 14-9 with a 2.28 ERA over an MLB-high 228 2/3 innings with six complete games, the most by any pitcher in six years.

Joining Alcantara as NL Cy Young finalists are a pair of lefties, Max Fried of the Braves and Julio Urias of the Dodgers.

Fried went 14-7 with a 2.48 ERA during an All-Star season and won a Gold Glove award after the campaign. He finished fifth in Cy Young balloting in 2020.

Urias followed up his 20-3 season in 2021 with a 17-7 campaign that included an NL-best 2.16 ERA. Urias, who finished seventh in last year’s NL Cy Young race, is bidding to join Sandy Koufax, Fernando Valenzuela and Clayton Kershaw as lefty Cy Young winners for the Dodgers.

Rodriguez, 21, helped the Mariners break a 21-year playoff drought, hitting .284 with 28 homers, 75 RBI and 25 stolen bases while providing highlight reel defense in the field, all while establishing himself as one of baseball’s most charismatic young stars.

Rustchman not only lived up to the potential that made him the first pick of the 2019 draft but finished the season by being selected as Baltimore’s most valuable players in voting by local media.

Rutschman didn’t make his big-league debut until May 21, when the Orioles were 16-24. They went 67-55 the rest of the way as Rutschman quickly established himself as one of the majors’ top all-around catchers. He hit .254 with 13 homers, 42 RBI and a .362 on-base percentage over 113 games while posting nine defensive runs saved, according to Sports Info Solutions.

Meanwhile Kwan was an avatar for the go-go style of play that propelled the Cleveland Guardians, baseball’s youngest team, to the AL Central title. He walked 62 times while striking out just 60, batted .298, stole 19 bases and scored 85 runs, all while becoming one of four Cleveland defenders to win a Gold Glove.

Rutschman and Kwan were college teammates at Oregon State.

The rookie class in the AL was particularly deep this season, with accomplished rookies like Kansas City’s Bobby Witt Jr. and Houston’s Jeremy Pena missing out as finalists. Pena, who spent part of his day on Monday riding in the Astros’ championship parade, is coming off an October when he was named MVP of both the ALCS and the World Series.

The race for NL rookie honors may be down to a hard-to-pick head-to-head race between Atlanta teammates.