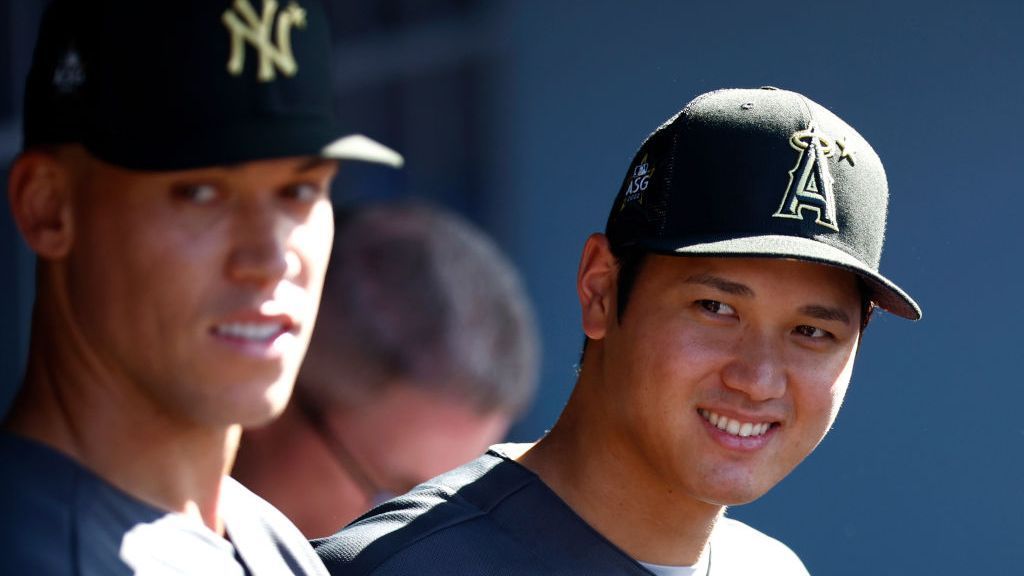 Los Angeles Angels pitcher/DH Shohei Ohtani had a 2.33 ERA and an .875 OPS in 2022. New York Yankees outfielder Aaron Judge led the league in OPS, runs, RBIs, and broke the American League home run record with 62. In any other year, either would be the obvious choice for AL Most Valuable Player — but they happen to have put up those numbers in the same season. While Judge is the odds-on favorite to win, would anyone really object if the vote was close — or even if it were tied?

It wouldn’t be the first time something like this would have happened. Close MVP races — or even ties — are rare, but they’re not unprecedented. Here are some races from the past 30 years where the voters just couldn’t quite decide on a clear favorite.

In his final year with the Miami Marlins, Stanton mashed 59 home runs, led the league in RBIs with 131 and OPS+ with 169. Votto, stalwart as ever with the Cincinnati Reds, led in overall OPS (1.032), OBP (.454) and walks (134). Their performances at the plate were so outrageously good that voters didn’t mind much that neither the Marlins nor the Reds made the playoffs. It was the closest race in MLB since 1979, when Willie Stargell and Keith Hernandez tied for NL MVP.

This season was the first of three consecutive MVP seasons where Nash, playing for the Phoenix Suns, would lead the league in assists per game, this time with 11.5. O’Neal, in his first year with the Miami Heat, put up a pretty typical Shaq statline — 22.9 PPG, 10.4 RPG, and 2.3 BPG. Both teams finished first in their respective divisions and made deep playoff runs, but the Suns fell to the San Antonio Spurs and the Heat lost to the Detroit Pistons in their respective conference finals.

The Seattle Storm‘s Jackson (17.6 PPG, 9.2 RPG, 2.0 BPG) actually had more first-place votes than the Houston Comets’ Swoopes (18.6 PPG, 4.3 APG, 2.0 SPG), but Swoopes beat her out in total points. If Jackson had received one more fourth-place vote instead of a fifth-place one, the two would have had equal point totals.

Manning shared his first of five MVP awards with Steve McNair. McNair, playing for the Tennessee Titans, threw for 3,215 yards, 24 touchdowns and 6 interceptions, adding another four scores on the ground. Manning, playing for the Indianapolis Colts, led the NFL in passing yards with 4,267, throwing 29 touchdowns and 10 interceptions. Both quarterbacks would lose in the playoffs that year to the third-place finisher: then-New England Patriots signal caller Tom Brady.

Gannon, playing for the then-Oakland Raiders, had by far the best season of his career in 2002, throwing for 4,689 yards, 26 touchdowns and 10 interceptions and leading his team to the Super Bowl. Favre was in full high-risk, high reward mode, leading the league in TDs with 32 but also throwing 21 INTs.

A bit of an awkward race considering Warner and Faulk were teammates on the then-St. Louis Rams. Both were key reasons why the Rams made it to their second Super Bowl in three years — Warner threw for 4,830 yards, 36 touchdownsand 22 interceptions, while Faulk was an incredible dual-threat, rushing for 1,382 yards and 12 scores and putting up 765 yards receiving and 9 receiving touchdowns.

Favre, in the last of three consecutive MVP seasons, led the Green Bay Packers to a Super Bowl appearance in 1997, throwing for 3,867 yards, 35 touchdowns and 16 interceptions. Sanders, on the other hand, put the Detroit Lions on his back, rushing for an astounding 2,053 yards,11 scores, and adding three more receiving touchdowns. The Lions lost in the wild-card round, and Sanders would play one more year before retiring.

The lockout-shortened 2012-13 season saw Ovechkin and Crosby each putting up 56 points. Ovechkin’s league-leading 32 goals, however, may have been the deciding factor in his narrow win.

Theodore and Iginla actually had the same number of votes for the Hart Memorial Trophy. Theodore, who led the league with a .931 save percentage, ended up beating Iginla, who led the league in goals (52) and points (96) due to receiving three more first-place votes.

Research from ESPN Stats and Information was used in this article.