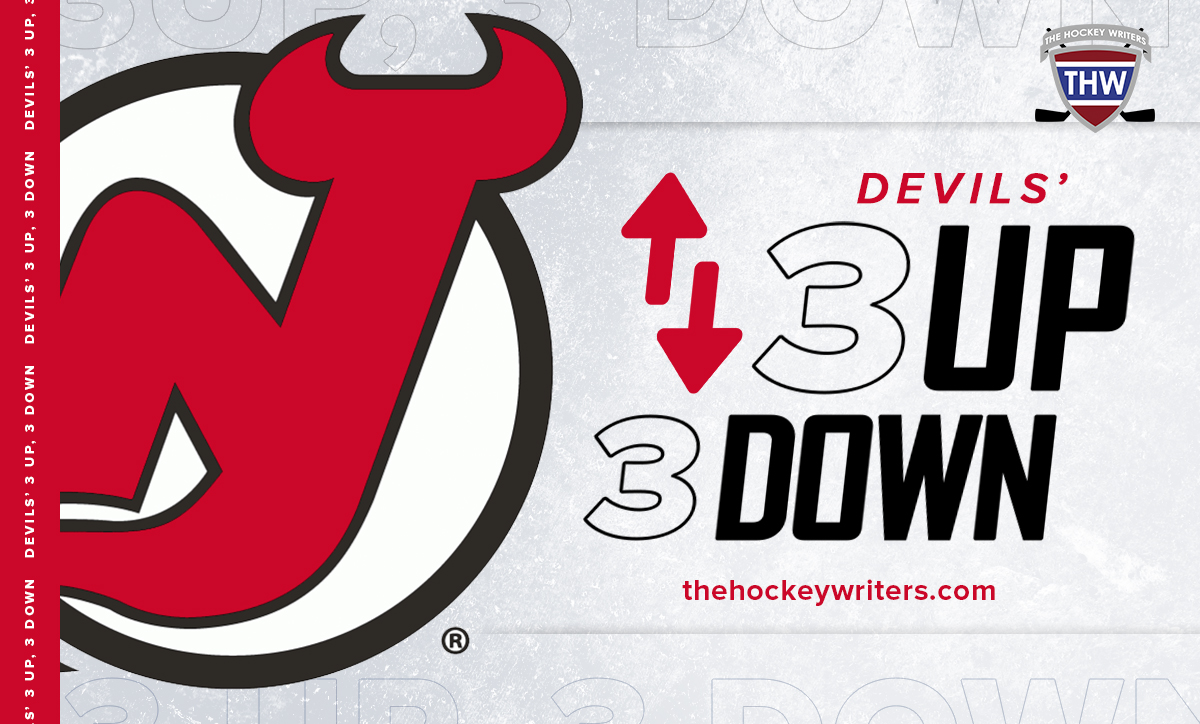 Welcome to the New Jersey Devils 3 Up, 3 Down for the 2022-23 season. This will be a weekly column released on Mondays, chronicling the highs and lows of the previous seven days.

The New Jersey Devils continue to be the hottest team in the league. On Nov. 12 the club earned a victory over the Arizona Coyotes securing their ninth consecutive win for the first time since Nov. 17, 2007 – Dec. 7, 2007. To put that into perspective, the last time the team strung together that many wins the original iPhone was available for purchase, and season one of The Big Bang Theory was being aired on CBS.

Here’s a look at some of the good and bad from the week that was for the Devils.

Plus 1: Another Perfect Week for New Jersey

For the second consecutive week, New Jersey put together a perfect 3-0-0 record. Through three games, 15 different players found their way onto the scoresheet with Tomas Tatar, Nico Hischier, and Dougie Hamilton earning a point in all three contests.

There was a scary moment on Nov. 10 as Devils goaltender Vitek Vanecek was involved in a collision with Ottawa Senators defenseman Thomas Chabot in his crease. An athletic trainer came out to tend to the 26-year-old, but ultimately he remained in the net. With less than 10 minutes left in the third period, a decision was made to pull Vanecek and replace him with 22-year-old Akira Schmid. The young goaltender made seven saves on seven shots to secure his first career NHL win.

Fans are beginning to flock to Prudential Center as attendance improved throughout this past week. For their Nov. 8 contest against the Calgary Flames, the arena was at 79.3 percent capacity and improved to 83.6 percent for their Nov. 10 game. For Saturday night’s game, it was a sold-out crowd of 16,514 fans.

Minus 1: Power Play Continues to Improve but Lacks Consistency

The Devils have been awarded 51 power play opportunities this season, at least one in every game thus far. Lindy Ruff’s team has scored 10 goals on the man advantage through 15 games; however, they have now scored a power-play goal in their last four games and two of them were overtime game-winners.

Currently the Devils have a power play percentage of 19.6, which has them ranked 19th in the league. There is no doubt the power play has improved under associate coach Andrew Brunette, but there are still areas to work on. Over the past couple of games, the coaching staff has switched between putting Fabian Zetterlund on the first unit as a shooter, and Nathan Bastian who continues to be the club’s net-front presence. Both options have proven to be successful as Zetterlund scored the game-winning power play goal in Calgary, and Bastian was standing in front of the Coyotes’ goaltender when Hamilton scored his second power play goal of the season this past week.

Plus 2: Hischier Playing the Best Hockey of His Career

The Devils captain has been impressive to start the 2022-23 season. Hischier has 17 points (eight goals, nine assists) in 14 games, and is currently on a seven-game point streak. Additionally, New Jersey is 11-0-0 when the 23-year-old collects a point. There is a consensus around the room that the former first-overall pick is playing the best hockey of his career.

Coach Ruff agreed that this is the best he’s seen of his captain by saying, “at the end of last season I saw some plays by Nico and I thought that was the best I’ve seen. I think he’s gone to another level.”

This past week the Devils’ third line consisted of Yegor Sharangovich, Dawson Mercer, and Jesper Boqvist. The trio combined for only one goal, which was scored by Boqvist on Nov.12 against the Coyotes.

Both Sharangovich and Mercer have now gone five games without a point. They are the only line that has not been consistently contributing to the scoresheet, but there may be a reason for that. Ruff has previously talked about the third line not getting a lot of ice time due to penalties and special times. There has been a noticeable drop in Mercer’s ice time, and against the Flames and Senators, he played a little under 12 minutes in each game.

Looking ahead to this week fans should not be surprised to see Sharangovich reunited with Jack Hughes while Erik Haula moves down to play alongside Mercer and Boqvist, as those were the combinations the coaching staff used at the end of the team’s game against the Coyotes.

Plus 3: Lindy Ruff Wins Back the Fanbase

It’s been a wild month for New Jersey’s head coach. After an intense start that included him getting booed off the ice amidst a barrage of “Fire Lindy” chants, it seems like he has finally won the fanbase back thanks to his team’s impressive winning streak. On Nov. 12, the sold-out crowd at Prudential Center chanted “Sorry Lindy”. After the game, the head coach said he did not hear the chants and was told about them after the game. When asked about it during his postgame press conference he laughed and with a smile gave the best possible response.

“I accept their apology. Someday us and the fans are going to sit down and have a beer and laugh about that one.”

Minus 3: Blackwood Was Moved to Injured Reserve

The Devils once again have two goaltenders on injured reserve. There was a brief sense of deja vu when Ruff announced the team gave Vanecek the night off and would go with a goaltending tandem of Schmid and Nico Daws, who was called up ahead of the team’s game against the Coyotes. Thankfully Vanecek will be making the club’s trip to Canada today and Daws was reassigned back to the Utica Comets of the American Hockey League. It seems like the club narrowly avoided a crisis and will have two capable goaltenders with them this week to try and keep the winning streak alive.

That does it for this edition of the Devils’ 3 Up, 3 Down. Hopefully, next week we’ll break down the team’s successful three-game road trip against the Montreal Canadiens, Toronto Maple Leafs, and Ottawa Senators.