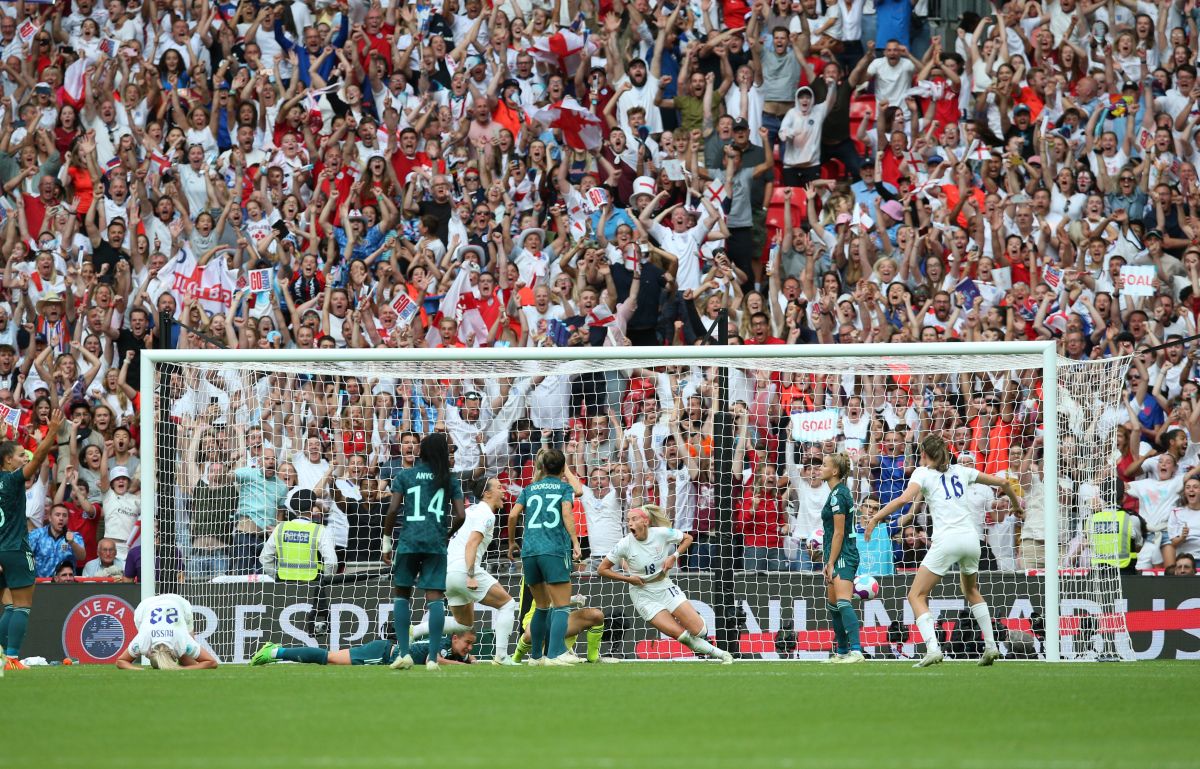 Chloe Kelly wrote herself into the history books with the winning goal in the 20th minute of the additional period after Ella Toone’s opener had been cancelled out in normal time by Lina Magull.

The Lionesses were able to hold on to record a memorable victory and win a major tournament for the first time.

Here, the PA news agency charts how the match unfolded.

Pre-match: Germany suffered a major blow ahead of kick-off as captain and tournament joint top scorer Alexandra Popp was injured in the warm-up and was replaced by Bayern Munich striker Lea Schuller.

3 minutes: England had a chance to make a dream start as Fran Kirby surged down the left and picked out Ellen White at the far post but the striker’s header was straight at Merle Frohms.

ℹ️ @alexpopp11 has suffered muscular problems in the warm-up. Lea Schüller replaces her in the starting XI 🔁— Germany (@DFB_Team_EN) July 31, 2022

25 minutes: Germany came into the game and were inches away from taking the lead from a set-piece. Magull’s corner caused chaos, with Marina Hegering’s effort eventually cleared off the line by a combination of Mary Earps and Leah Williamson. The incident was checked for a handball, but England survived.

38 minutes: White had another brilliant opportunity to break the deadlock as she set Beth Mead clear down the right and got on the end of Mead’s return ball but could not keep her effort down.

48 minutes: Germany started the second half strongly and after her introduction at the break Tabea Wasmuth almost made an instant impact as she took advantage of a mistake by Millie Bright, but shot straight at Earps when she raced in on goal.

50 minutes: England survived another major scare as Lina Magull missed a golden opportunity. After the ball fell kindly to her on the penalty spot she poked an effort towards goal but saw it fly wide of the post when it really should have hit the back of the net.

55 minutes: Sarina Wiegman stuck to her tried and tested formula and introduced Alessia Russo and Ella Toone for Ellen White and Fran Kirby.

61 minutes: Toone secured her place in folklore with a stunning finish to open the scoring just six minutes after coming on. A brilliant ball from Keira Walsh set the substitute in on goal and she produced a moment of sublime composure to lift the ball over on-rushing Germany keeper Frohms and send Wembley wild.

65 minutes: With the home fans still celebrating, England’s hearts were firmly in their mouths when the dangerous Magull surged into the box and thundered a shot against the post, with replays showing Earps got the most vital of touches.

79 minutes: Germany’s response was good and moments after Leah Williamson produced a goal-saving block, Martina Voss-Tecklenburg’s side were level. Sydney Lohmann did brilliantly to play in Wasmuth and her ball to the near post was steered home by Magull to set up a grandstand finish.

90+4 : England managed to regroup after Magull’s leveller but neither side were able to find a winner as it went to extra time.

110 minutes: England’s golden moment came in the second half of extra-time as Chloe Kelly committed herself to the annals of time. After Germany failed to clear Lauren Hemp’s corner, the loose ball fell to her and she poked home at the second attempt to spark euphoric scenes of celebration.