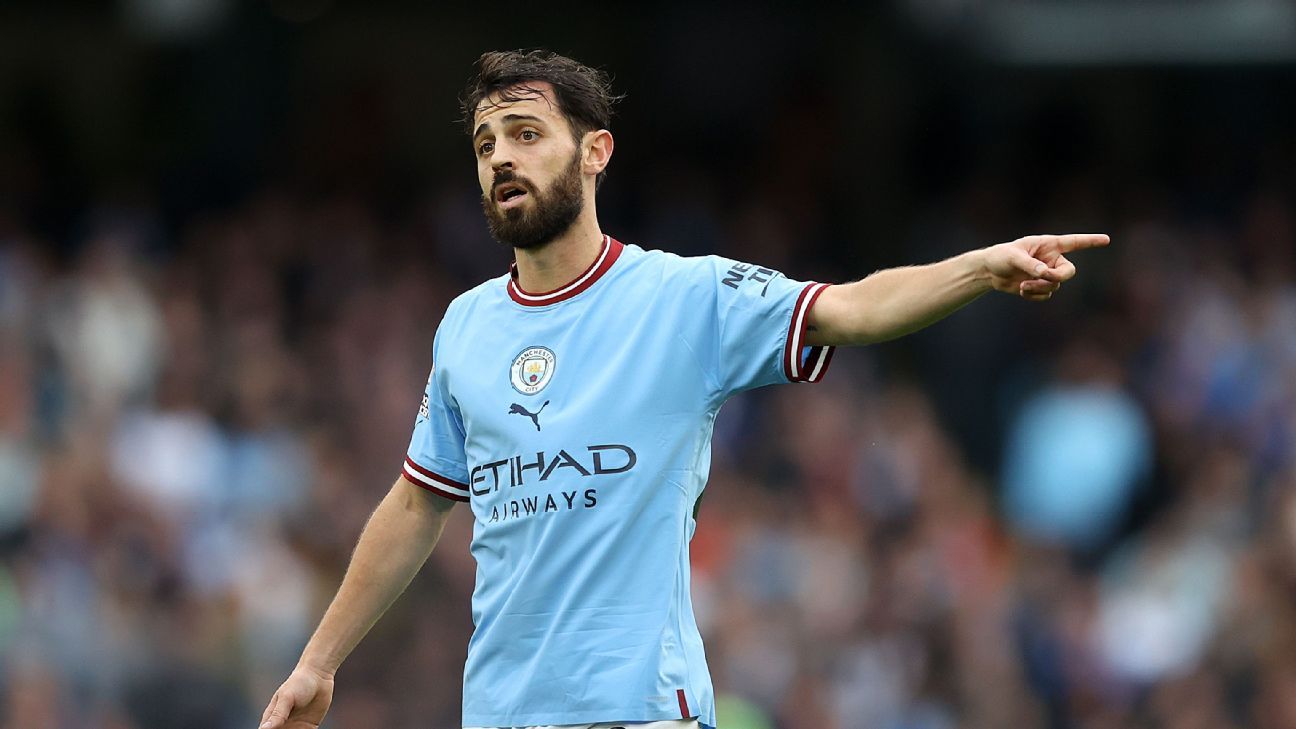 Barcelona are set to return to their pursuit of Manchester City star Bernardo Silva, according to Sport.

The LaLiga side were linked with the 28-year-old throughout the summer, and they are reportedly now confident that they have the resources to get a deal over the line. The Blaugrana are looking to make a number of signings in January, and it is reported that manager Xavi Hernandez sees Silva as an important part of his long-term project at the Camp Nou.

The Portugal international has remained an integral part of Pep Guardiola’s squad this season, with 19 appearances across all competitions for Man City. That could create difficulty in the negotiations as Barcelona try to persuade the Citizens to part ways with a key player in the middle of a Premier League title race.

But following the retirement of Gerard Pique, the Catalan club now believe they have the resources to get a deal over the line when the winter transfer market opens, while also looking to address options at centre-back and on the right-wing.

10.16 GMT: Barcelona are in advanced to negotiations to extend Marcos Alonso‘s contract by an additional two seasons with his terms due to expire next summer, sources told ESPN’s Sam Marsden and Moises Llorens.

Alonso, 31, joined as a free agent from Chelsea at the start of September after his contract with the Premier League side was mutually terminated. The Spain left-back only signed an initial one-year deal at Camp Nou, but Barca have already expressed a desire to prolong his stay by an additional two seasons.

Alonso scored his first goal for Barca in the midweek win over Viktoria Plzen in the Champions League and has made 10 appearances in all competitions since signing. Several of those appearances have come as a centre-back in recent weeks as Barca deal with an injury crisis in defence.

The 56-year-old was Wolves’ first-choice to replace Lage, but he initially took himself out of the running for the job for personal reasons. However, a few weeks on talks resumed, and he will take up the role after the club’s league fixture against Arsenal on Nov. 12.

Wolves, 19th in the league with 10 points from 13 games, host Brighton & Hove Albion later on Saturday.

09.00 GMT: Manchester United coach Erik ten Hag said Donny van de Beek must improve when given the chance to prove his worth at the club, but is not giving up on the midfielder just yet.

Into his third season at United, Van de Beek is no closer to holding down a regular first-team spot, having played just 19 minutes of Premier League football this term after spending the latter half of last season on loan at Everton.

The 25-year-old was handed his first start of the season in the Europa League against Real Sociedad on Thursday night, but was ineffective as United stuttered to a 1-0 win.

“He had a good preseason and then got injured, now he is back,” Ten Hag said in a news conference ahead of United’s clash with Aston Villa on Sunday.

“I think it was a decent performance [against Sociedad] but he can do better. I know him very well [from Ajax].

“He delivered what I expected in terms of positioning, pressing and in the transition. I can only talk about him [at United] from my time here and I think he can do more.”

– Chelsea are preparing to terminate Denis Zakaria‘s loan deal in January, understands Calciomercato. Despite impressing in his performance against Dinamo Zagreb in the Champions League on Wednesday night, it is reported that the Blues are still finding it difficult to find space for him as a regular start in Graham Potter’s side, and have no intentions of activating the permanent option clause worth €28m.

– AC Milan are keeping close tabs on Jakub Kiwior, according to Gazzetta dello Sport. The Serie A champions have been watching the 22-year-old Spezia centre-back closely in recent weeks, and the Rossoneri could be preparing a move for his signature in January. The Poland international has made 12 appearances in Serie A this season.

– Arsenal and Aston Villa are interested in Villarreal star Alex Baena, writes Ekrem Konur. The 21-year-old winger has been a standout player for the Yellow Submarine this season, and it looks as though that has caught the attention of sides in the Premier League. He has scored four goals in 11 total appearances.

– New York City FC are looking to keep hold of Santiago Rodriguez, reports Cesar Luis Merlo. The 22-year-old Uruguay international attacking midfielder was a key player for the Pigeons during the regular season, having contributed to 18 goals in 35 matches. It is understood that they are assessing the possibility of acquiring him on a new loan deal ahead of next season.

– Fiorentina midfielder Szymon Zurkowski is attracting interest from Bologna and Torino, understands Tuttosport. It is reported that the 25-year-old midfielder does not want to renew his contract in Florence, and that could force the Viola to part ways with him in January to avoid losing him as a free agent in the summer. He is yet to make a start in the Serie A in the 2022-23 campaign.