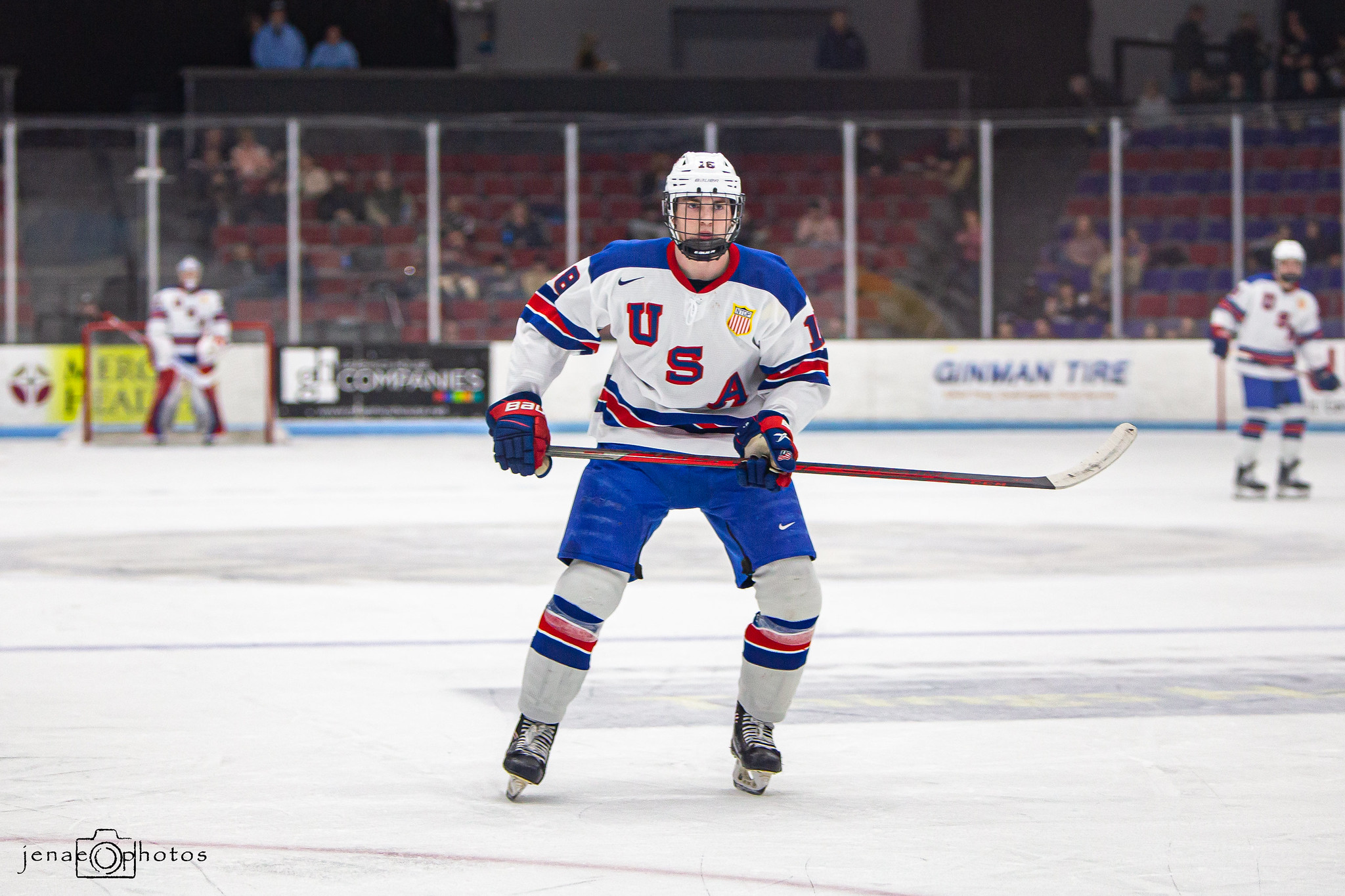 Just like Matthew Savoie, if Shane Wright wasn’t part of this draft, Logan Cooley would have a chance to go first overall. In fact, when Wright was “struggling” at the beginning of the season, there was talk of him actually being selected ahead of the 6-foot-1 Burlington, ON native. Not so much now that Wright is putting on a show in the Ontario Hockey League (OHL) with the Kingston Frontenacs where he’s on pace for 95 points.

That certainly doesn’t mean you should overlook Cooley though. The two-way monster has been impressive this season in the USHL with the United States National Development Team (USNTDP), where he is 11th in even-strength points (16) among prospects in their draft year and tied for third in first-assists (10) behind only Frank Nazar and Dylan James. Then, to finish it off, he’s second to Nazar in total primary points per estimated 60 minutes of time on ice (P1/e60), generating 3.93 P1/e60.

Cooley will succeed in the NHL due to his complete game and Selke Trophy-like qualities. He doesn’t only thrive in the offensive zone, he can make elite plays in the defensive zone too. Combined with his faceoff ability, diligence to a 200-foot game, smart stick and high hockey IQ, he is someone every aspiring Stanley Cup winner wants on their team and every coach wants on the ice in key situations.

Cooley’s hands, playmaking and explosive skating make him a perpetual threat as he can skate the puck into the attacking zone or pass it to an onrushing winger for a scoring chance. He also has a wicked wrist shot which he uses often on the power play and of course on the rush when he blows past the opposition with his speed.

There are not many weaknesses to Cooley’s game as he is as well-rounded as they come. The only thing that may hold him back is his size, but even that shouldn’t matter too much when he makes it to the NHL. He’s just too smart and shifty to have that be the thing that holds him back. Throw in his work ethic and never-quit mentality, and his lack of size should be rendered almost moot when it comes to being a weakness.

Committed to the University of Minnesota where he will join fellow USNTDP teammates Cruz Lucius, Ryan Chesley and Jimmy Snuggerud as freshmen in 2022-23, we will soon find out if his elite toolkit translates to the next level against older and stronger players in the NCAA.

After Wright, Cooley should be the next player off the board. Ranked second overall by most major scouting outlets, he’s one of those special players that could be ready to play in the NHL right off the bat. Like his Canadian counterpart, his mature two-way game is NHL-ready. It remains to be seen if he comes over right away or stays in the NCAA like 2021 first and second overall picks Owen Power and Matty Beniers did after they were selected by the Buffalo Sabres and Seattle Kraken respectively. Regardless, he won’t be without a team very long after the clock starts on the 2022 Draft in July.

“Logan Cooley’s style of play is one which every team in the NHL could use on their roster. He’s an extremely talented two-way forward, and where he may lack in size to some, he certainly more than makes up for it by playing an extremely mature game in all areas of the ice. Cooley can be trusted in every situation, regardless of how the game is playing out. His two-way game is arguably amongst the top of the class, if not already sitting atop the list.” – Paul Zuk, Smaht Scouting

“Cooley is an exceptional puckhandler. Having placed himself on the radar last season with his ability to make quick, intelligent plays in traffic that were already quite demanding of high-level puck skills, Cooley has since taken his puck skills even further. He is a constant threat to attack the slot, able to navigate through several defenders to do so. When attacking with speed, he is often able to throw a quick fake upon a defender and find space towards the middle of the ice, despite the defence’s desire to force him outside…” – Sam Happi, McKeen’s Hockey

“…There is nothing enigmatic about his game, and Cooley has a penchant for creating scoring chances from scenarios most would deem untenable. The best way to understand or appreciate his craftiness is by observing the manner in which Cooley enters the offensive zone and how he utilizes all four members of his on-ice support to create quality scoring chances from any spot in opposing territory. He’s poised, mature, calculated, and inventive.” – Steve Kournianos, The Draft Analyst

“I think I have the skills, hockey IQ, and play-making abilities, stuff like that…But I think it’s just gonna come down to my physical strength. I’m not the tallest and strongest right now, but I think that comes with developing my body and I think once I can do that, and have a big summer, hopefully it could be in the conversation. Hopefully I can make the jump right away, that’d be pretty cool.” – Logan Cooley

Cooley has the potential to be a high-scoring two-way center who can play both the power play and penalty kill and be matched up against the top lines in the NHL. At 5-foot-10, he might not be as impactful physically as Aleksander Barkov or Jonathan Toews, who are 6-foot-3 and 6-foot-2 respectively, but his hockey sense and elusive nature will make him effective nonetheless. I wouldn’t be surprised if he won a Selke Trophy or two before his NHL career was done.

Cooley played one game for Team USA at the 2022 World Junior Championship before it was shut down due to the COVID-19 pandemic. He also played in the 2021 U18 World Championship where he recorded two assists in five games.

Matthew also hosts The Hockey Writers Prospect Corner on YouTube and is the co-host of the Western Centric Podcast.