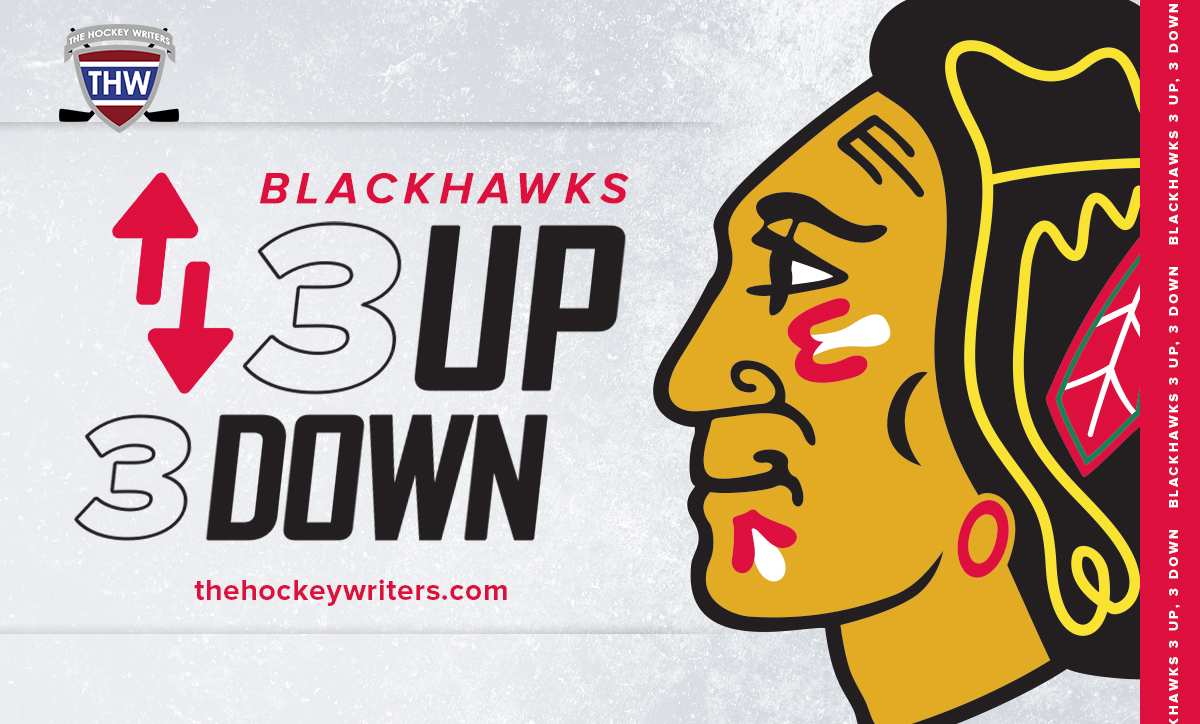 With the Chicago Blackhawks having now past the quarter mark of their 2022-23 schedule, what they are and are not has become increasingly clear. Not that it was ever really in question, given the offseason that Kyle Davidson navigated on behalf of this rebuild. Yet, while a more successful start than anticipated could have caused some confusion for an optimistic onlooker, Chicago’s realistic supporters surely anticipated what would follow.

As this Blackhawks team seeks comfort from the basement of the Central Division, having accumulated enough of a sample size to own that they belong there but being that there’s still so much season left to struggle through, it seemed there was no better time to infuse a pattern of positive storylines. Even if it does feel forced, from time to time.

Introducing, a new column brought to you by The Hockey Writers, Blackhawks’ 3 Up, 3 Down. Rather than solely fixating on all that will continue to go wrong for this club in 2022-23, you can expect just as much good news from these reads along the way. Not to worry if you can’t seem to find any such stories yourself, as we’ll do the digging for you.

Plus One: Blackhawks Finally Stop Skidding

Although losing is to be expected of a rebuild, the level of failure this squad has recently made their norm took things to another level. After beginning the season by achieving a respectable 6-5-3 record through their first 14 contests, the Blackhawks then proceeded to lose their next eight in a row.

Sitting at 6-12-14 as they entered December, Chicago hadn’t celebrated a victory since mid-November. Looking to avoid extending their losing streak to three weeks, the Blackhawks visited Madison Square Gardens to kick off a new month against the New York Rangers on Dec. 3.

Motivated to climb back into the win column, the Blackhawks were on the board within the first few minutes of this one and never looked back. Chicago’s special teams went three for four on both the power play and penalty kill, while nine players notched at least one point. A solid collective effort in net also set a .929 save percentage (SV%), while they allowed only two against for the first time since their last victory on Nov. 12.

Even though more losing will follow for the Blackhawks in 2022-23, not allowing this streak to last as long as the one that kicked off 2021-22 is a step in the right direction. That they haven’t yet fallen victim to a justifiable level of apathy suggests the right type of mindset is at play for this group, as they continue to work on propelling forward.

Minus One: Chicago’s Scoring Is Too Sporadic

It’s one thing for an NHL team to experience ups and downs in relation to their offensive output, but the 2022-23 Blackhawks seem to have made that pattern their nightly norm. As evidenced by the fact that they tallied five against the Rangers to stop that ugly skid, only to be blanked by the New York Islanders the following night and potentially start another.

Their 2.65 goals for per game (GF/G) currently ranks them third-worst in the entire league. Yet, despite having scored two or fewer in 11 contests thus far, this roster has also found a way to muster up three or more 12 times. Of which, they’ve scored five on four separate occasions.

The point being is that Chicago has been anything but consistent this season. Unfortunately, that’s the reality of a rebuild. However, for fans to still be spoiled with the type of offense this lineup has proven capable of should offer at least some sense of solace as they brace for more less-than-productive outings in the near future.

As Patrick Kane began the 2022-23 campaign, the former first overall pick’s 16th in the NHL, he was only 20 points away from achieving another major milestone. Having already played in his 1,000th game, accumulated 750 assists, scored his 400th, and captured all the personal hardware he has to date, it’s amazing to think that the winger is poised to accomplish even more.

Beyond the collective ensuring that Chicago’s losing streak didn’t extend to nine games, Kane decided to add to their celebration by earning his 1,200th point in the process.

“It’s nice to reach it, obviously,” Kane said. “You play a long time in the League you’re going to reach certain milestones. Yeah, it feels good and it’s nice to get it on a night like this where we get a win and you can contribute for the team, too.”

Having now accumulated 434 goals and 766 assists, with time ahead of him to add to those totals, the 34-year-old is the second Blackhawk to reach the milestone. Coincidentally, Stan Mikita hit that mark when he was the same age back in 1974-75.

Only the 50th player in league history to reach 1,200 points, every achievement reached and record broken pushes Kane into yet another exclusive group. As only the third active player on that list, time will tell how much further he can climb it by the time he decides to call it a career.

Minus Two: Toews’ Pace Slowing Down

As part of one of Chicago’s most legendary duos continues to perform in an ageless manner, his fellow three-time Stanley Cup-winning captain isn’t finding as much consistency in their game. Despite ranking third on the team in production at the moment, Jonathan Toews‘ hot start is the sole reason why he’s still there.

Ready to rebound after a disappointing 2021-22 campaign, during which Toews hit a career-low in points with only 37, Chicago’s long-time leader entered 2022-23 ready to accomplish far more. Setting a pace of 0.82 points-per-game (P/G) through his first 11, with seven goals and two assists in that span, it seemed this could turn out to be a record year for Toews in a much more successful manner.

Unfortunately, that trend has since proven unsustainable as Toews was only able to collect five points through his next 13 contests, equating to 0.38 P/G. While it’s possible that he could heat up again, especially if he remains reunited with Kane, his recent results seem to be more in line with what to expect of the centreman. Anything additional should be considered a bonus, given his career’s trendline.

Although injuries aren’t new to Petr Mrázek, starting his tenure with the Blackhawks by missing three weeks early on in his first season with the club certainly wasn’t ideal. Not only did that then mean that his ability to settle into a new city would be delayed, but it also left Chicago without their No. 1 netminder in the meantime.

Fortunately for the franchise, they had other goalies deeper on their depth chart step up in Mrázek’s absence. During that span, Alex Stalock, Arvid Söderblom, and Dylan Wells combined for a record of 4-3-2. Beyond respectable results for a rebuild, let alone one without their starter. One could only imagine how much better this lineup would perform once Mrázek was back.

Unfortunately, the reality wasn’t as ideal as the fantasy. Returning on Nov. 10, Mrázek went winless throughout the remainder of the month, suffering five losses in a row. A new month then offered a much-needed reset, which worked to everyone’s advantage in Chicago.

Right as it started to seem as though both he and his team would avoid victory the rest of the way, Mrázek achieved a .955 save percentage (SV%) and 1.28 goals saved above expected (GSAx) through 40 minutes of play against the Rangers on Dec. 3. Thereby helping break both his own and his team’s ugly streaks.

Minus Three: Mrázek Injured Yet Again

Why were the stats communicated above based on only two-thirds of that respective contest, you ask? Because, as has become a regular occurrence for the 30-year-old, Mrázek was unable to complete the contest due to an in-game injury.

Certainly unideal for all involved, as any respectable athlete is never trying to force their way to the sideline and onlookers have to feel for a professional who continually bounces back into action amid such vulnerability. Nevertheless, this is a tough setback for both Mrázek and the Blackhawks.

Given that his history of groin injuries stretches further back to well before he became a Blackhawk, it shouldn’t surprise that Mrázek is still dealing with what has become a chronic issue. This is now his second time out as a result of this ailment, before even coming close to the midway point of the season.

Mrázek has only found his way into nine of Chicago’s first 25 games of 2022-23. Not a great sample size, for the goalie who was seemingly set to be their starter. What’s worse, he’s only helped the Blackhawks earn two victories to date. Hopefully, a speedy recovery precedes a more impactful and lasting presence.

Blackhawks Look Ahead to 2023

Currently riding a cumulative record of 24-40-12 through 2022, it’s safe to say that the Blackhawks are excited to close the chapter on this calendar year. Yet, before they can shift their focus, 11 games remain through December. Each one against an opponent that currently owns a better points percentage than Chicago’s .375.

That said, it doesn’t take much for a team to be ahead of the Blackhawks in that regard. With a new year upon them, though, a fresh start could be just what this rebuild needs to show up in a more meaningful fashion as they proceed through 2022-23.

RELATED: Blackhawks Have the Answer to Maple Leafs’ Defense Dilemma

Plus, that they’ve done this poorly so far works to their advantage when it comes to making it far more probable that their results can only improve from here on out.

Freelance thinker, paying too much attention to digital aesthetic. Oxford comma enthusiast. Spider-Man supporter. Sports fan, with two favourite hockey teams. If the Blackhawks and Maple Leafs ever meet in the Stanley Cup Final, you can find me wherever they’re playing that night.

Find me and more of my work at mralwayswrite.com and find me at @MrAlwaysWrite.