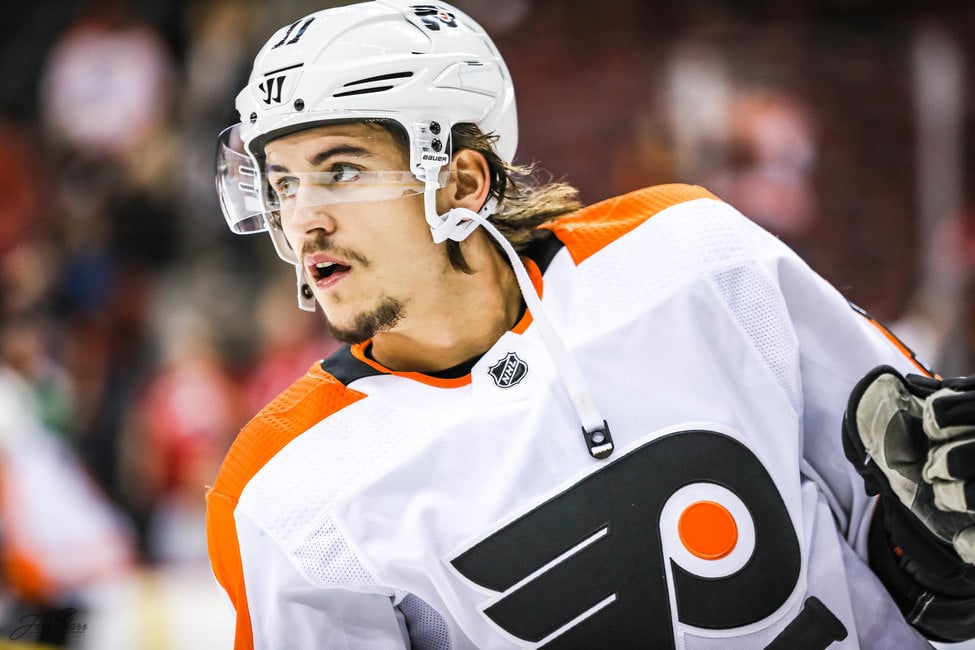 Welcome to 2022 Offseason Trade Targets, where we’ll examine several teams the Toronto Maple Leafs could be interested in doing business with this summer. From minor moves to blockbuster deals, I’ll cover them all as we dive into some potential trade options for general manager (GM) Kyle Dubas.

After zoning in on some second-line left-wing options last time around, we head to the city of brotherly love and jump behind the bench of the Philadelphia Flyers. A team trying to get back into contention in the eastern conference, Flyers GM Chuck Fletcher isn’t shy to make some bold moves and perhaps a deal is struck with Toronto this summer. Let’s take a look at some Flyers targets the Maple Leafs should consider:

A player Leafs Nation knows very well as he was available back on draft night in 2015 and Toronto ended up trading down in a deal with Philadelphia, Travis Konecny is someone who could be a valuable piece for the Leafs. The 25-year-old is versatile to play either wing and someone skilled enough to play anywhere in the lineup. He led the Flyers’ offense last season with 220 shots and tallied 52 points in 79 games.

Konecny’s signed through the 2024-25 season at $5.5 million annually, a number that would be tough for Dubas and company to make work, however, Toronto seems to be one of the more creative teams when it comes to maneuvering the salary cap. There have been some rumblings lately about his availability, and since the Flyers are not in a total rebuild mode, it’s likely they would want some NHL talent in return and not necessarily a ‘futures’ package from the Maple Leafs.

The Maple Leafs need a second-line left wing and should be looking to upgrade from pending free-agent Alexander Kerfoot. The trio of Kerfoot, John Tavares and William Nylander is not necessarily a tough line to play against and Dubas should be looking to add in a strong forechecker and someone who isn’t afraid to muck it up in the dirty areas of the ice.

The London, ON native is someone who has regressed slightly over the years and hasn’t reached 20 goals since 2019-20. Perhaps this would be a good time to buy low and see if the Flyers would have interest in a package that included Kerfoot, defenseman Justin Holl and an NHL-ready prospect. Never hurts to ask, right? Given Konecny’s age, team control, production and fit, he should be a prime trade target for the Maple Leafs.

At $7 million on the books, no thank you, but at $3.5 million, James van Riemsdyk (JVR) should be considered for a reunion in Toronto. The 33-year-old is someone who could push down Michael Bunting to the second-line with Tavares and Nylander and give the Maple Leafs a solid offensive trio for their top line.

While he doesn’t skate like he used to, JVR is one of the best net-front presences in the game, and it certainly would be interesting to see what he could do playing alongside Mitch Marner and Auston Matthews. He’d also provide another element to the team’s power-play and could potentially give head coach Sheldon Keefe a chance to move John Tavares to the second unit, allowing for a more balanced approach.

Money is the biggest issue with the Maple Leafs, so perhaps JVR isn’t the best offseason target, but certainly someone the team should have circled for a deal before the trade deadline when he becomes even cheaper on the books. Last season the former Leaf scored 24 goals, playing in all 82 games for the Flyers.

Flyers forward Morgan Frost knows the Maple Leafs’ organization very well with his father working game nights for many years, but let’s not shy away from the fact he’s a former Sault St. Marie Greyhound, almost instantly making him a trade target in Toronto.

Frost is 23 years old and split last season between the Flyers and the American Hockey League’s Lehigh Valley Phantoms. He recorded 16 points in 55 NHL games, and the former first-round pick is someone who appears poised to break out in the very near future.

With the Maple Leafs having a crowded blue line and still in contract negotiations with restricted free agent Rasmus Sandin, is Frost a player Dubas would consider in a one-for-one swap with the Flyers? Frost played mostly as a center in Philly since arriving on the scene in 2019-20 and projects to be a solid second-line option.

There’s been a lot of chatter amongst Leafs Nation about eventually moving Tavares to the wing as early as the 2023-24 season, perhaps if Frost is acquired this summer, in two years, he’d be perfectly suited for the role.

The Maple Leafs are currently over the salary cap and have a few different options to become cap compliant. The roster has some holes up front and there’s a crowded blue line which makes you feel a trade is still coming this summer. If Dubas is looking for another forward to add to their group, the Flyers should be near the top of his list of options.

Shane covers any and everything to do with the Toronto Maple Leafs & Pittsburgh Penguins. A constant contributor to the THW family, his passion and unique perspective on the game results in some diverse content. Certainly versatile, you can also find him contributing at NHLTradeRumors.me, BaseballRumors.me & BBallRumors.com. Follow along on Twitter @ShugMcSween