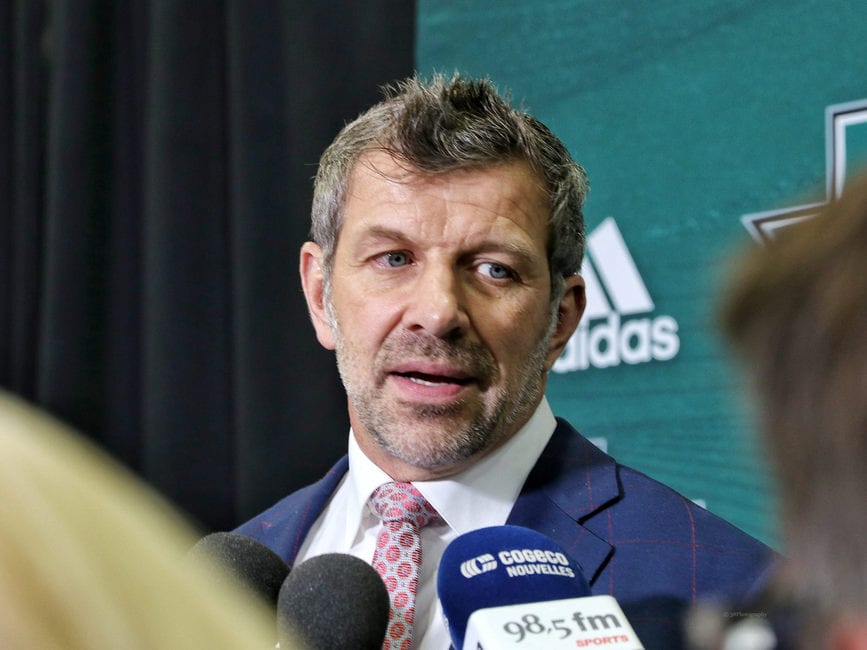 In today’s NHL rumors rundown, Kyle Dubas was spotted up in the stands of the Ottawa Senators vs. Calgary Flames game on Wednesday. Was there a specific reason he was there? The Arizona Coyotes have a strong appetite for change and the Pittsburgh Penguins think this could wind up being a busy deadline regardless of talk things will be quiet. Finally, Marc Bergevin held fast on the idea that the Montreal Canadiens won’t be active at this year’s deadline.

Social media was abuzz when the Maple Leafs GM was spotted at the Senators vs. Flames game on Wednesday. It’s possible he was simply there to check out the team’s Thursday night opponent (Ottawa), but more insiders were fascinated with the idea that he might have been looking at one of the players on the ice before the NHL Trade Deadline.

While the Maple Leafs have been linked to Mikael Granlund of the Nashville Predators, Frank Seravalli hinted that Toronto might be working Plan B or C when it comes to making a deal because of the quarantine issues involved with trading for a player from across the border. Both Calgary and Ottawa make more sense if Dubas is keen to make a move.

As for who he might have been looking at if he was scouting for a trade, that’s unclear. There have been rumored connections to a few players, including forward Sam Bennett who played 15:48 of Tuesday’s 3-1 loss to the Senators and went plus/minus – 1.

GM Marc Bergevin says it’s “very unlikely” the Montreal Canadiens do anything before April 12 trade deadline. Adds that he has no cap space and would need to find a money-in/money-out transaction. He also added that the COVID rescheduling won’t play a factor in what they do or don’t do at the deadline.

Bergevin added that one of their last moves was signing Tyler Toffoli, and they knew when they signed him they’d be up against the cap and it would be harder to make moves. Says he doesn’t regret that and he’s not worried about the deadline because he still really likes his team.

Coyotes defenseman Alex Goligoski rose to No. 8 on the trade bait list for TSN and Darren Dreger reported during the recent TSN Insider Trading segment that Coyotes general manager Bill Armstrong could look at making changes at the deadline or in the offseason. He’s not exactly holding a fire sale, but Dreger noted there’s “a strong appetite for different.”

The NHL insider adds that most of what might get done in Arizona won’t get done before the trade deadline, but will be dealt with in the offseason. He notes the team is “willing to discuss just about anything on the trade front.”

Penguins Think Deadline Will Be Busy

While a lot of insiders are hinting this could be a quiet trade deadline and some GMs have already suggested there’s not a ton they can do, Josh Yohe of The Athletic reports that Penguins new president of hockey operations, Brian Burke, thinks business could pick up.

Burke noted that general manager Ron Hextall is working the phones as their team tries to add at the trade deadline if they can. Burke indicated he and Hextall would like to bring some size to their roster. Burke said:

I heard a guy on NHL radio today — and it’s a guy I respect — saying that he doesn’t think there will be much activity. I respect him, but I disagree. There will be lots of movement. I really believe that. I’ve been there. When you think you’re close, you’re going to make a move. …

Burke added, “We like our group” but noted it could be better. The only issue for Pittsburgh is that they don’t have picks left to trade and they won’t be putting Samuel Poulin or Nathan Legare in play. “So, we don’t necessarily have certain things to offer that other teams do,” Burke said. He did suggest they can offer other incentives that are different and they will try to use that to add.