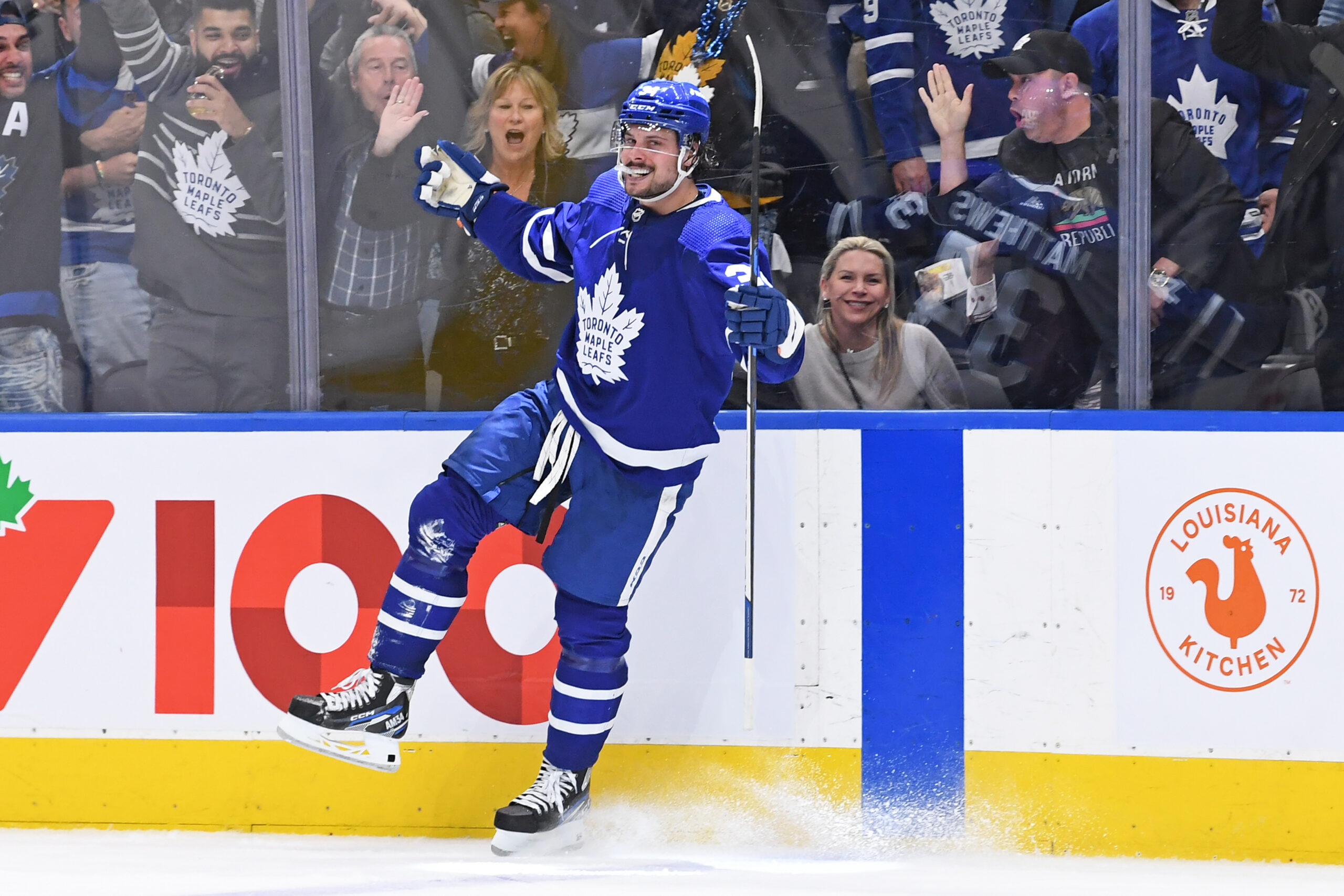 We previously wrote four articles ranking the play of the Maple Leafs’ defensemen in offense and defense during the regular season and playoffs. Now we turn our attention toward the forwards.

The post today will rank the top twelve Maple Leafs’ forwards for their five-on-five play in six offensive categories tracked by the website Naturalstattrick. Those categories are Shot-Attempts For, Shots For, Scoring-Chances For, High-Danger Chances For, Goals For, and Expected-Goals For.

Shot-Attempts For per 60 Minutes Played

Scoring Chances For per 60

High-Danger Chances For per 60

We’ve been tracking these numbers for the past few seasons. In each of those seasons, Matthews has gotten better and better. The only question we have is, at the age of 24, how much better can Matthews get?

If you look up the meaning of bang for the buck, you should see Michael Bunting’s mugshot. Signing Bunting for two years at $950,000 per season has to be one of Kyle Dubas’ best moves.

Related: Maple Leafs’ Bunting Should Be a Calder Trophy Candidate

When we wrote that Matthews finished first in five of the six offensive categories, the one category where he did not finish first was Goals For. Bunting topped that statistic with an amazing 4.82 goals per 60 minutes played. Putting that another way, in 2021-22 Bunting was on the ice for the most goals of any Maple Leafs’ player (other than the goaltender).

Bunting had the one first-place ranking, two seconds, and three thirds. Bunting’s average ranking in the six stats was 2.3, two decimal places ahead of……….

Mitch Marner put up the best numbers of his career in 2021-22. However, it was interesting that he was neck and neck with Bunting in almost every category. Marner ultimately finished second in three of the categories and third in three. What gave Bunting the edge was his first-place finish in Goals For compared to Marner’s third-place finish.

We expect that the Marner haters will jump all over this as another sign of how overpaid he is. Another way to look at it is between Marner and Bunting they make an average of $5.9 Million per season.

Related: The Sedin Twins and the 1999 NHL Entry Draft

The one thing that jumps out is how much ahead of the rest of the forwards Matthews, Bunting, and Marner are. If you go back and study the numbers, those three are in a class by themselves.

John Tavares’ numbers would indicate that he’s the “best of the rest.”  His offensive stats are the best of any player not on that first line. They also support the fact that Tavares is still close to a point-a-game player at the age of 31.

It would make sense that William Nylander and Tavares’ numbers would be close to each other because they played by far the most ice time together. Their offensive output is close to on par as well. Nylander scored four more points in two more games played this past season than Tavares.

It is interesting to note that offensively Ilya Mikheyev was not that far behind Tavares and Nylander. Mikheyev’s average rank in the six offensive categories was 5.5. That compares to Tavares’ 5.0 and Nylander’s 5.2. It’s also interesting that Mikheyev finished ahead of our next player in five of the six categories.

While 2021-22 was Alex Kerfoot’s best season production-wise, his offensive numbers analytics were well below his regular line-mates Tavares and Nylander. Kerfoot’s average ranking of 7.2 puts him out of the top six offensively.

The one number that does stand out to us is his 3.58 Goals For per 60, which was actually higher than Tavares’ 3.07 or Nylander’s 2.94. It begs the question, is that stat an anomaly or is there a reason for it? We wonder if Kerfoot’s defensive numbers might be an answer.

Pierre Engvall’s overall ranking of 8th seems about right. By the eye test, his place on the roster appeared to be on the third line and that’s where his offensive stats place him.

We all know that Jason Spezza announced his retirement from the game recently. Of note here is that his offensive analytics place him ninth amongst the 12 forwards. They would seem to indicate that offensively in 2021-22 Spezza produced closer to a third-line forward.

Ondrej Kase played all over the lineup this past season. He saw time in the top six and saw some time on the fourth line; however, he spent most of his time on the third line. His offensive analytics in 2021-22 place him more as a fourth-line player. It will be interesting to see how his defensive numbers play out.

When Dubas signed David Kampf prior to the 2021-22 season, it was obvious he did not expect Kampf to contribute much offensively. After all, Kampf only scored one goal in 56 games last season for the Chicago Blackhawks. Kampf had the toughest zone starts of any Maple Leafs’ player this past season, starting 82.6 percent of shifts in the defensive zone.

Despite increasing his goal production by more than 10 times this season (he had eleven goals), Kampf finished dead last of the 12 forwards in offensive statistics. Kampf’s strengths were supposed to be his defensive play. We will have to see how he ranked defensively.

Although we are mentioning Wayne Simmonds last amongst the top twelve forwards, he didn’t rank last. He ranked second last. His average ranking for offensive stats was 10.8, slightly ahead of Kampf’s 11.2 average ranking.

We are arbitrarily changing Simmonds’ ranking to 12th. The reason is he had vastly easier zone starts than Kampf, 56.4 percent of them in the offensive zone. Simmonds also faced much weaker competition than Kampf did.

These two players were not included in our study. We did track their numbers in the six offensive categories. If we had included them, Blackwell would have finished 13th and Clifford would have placed 14th.

Related: How Do Current Maple Leafs’ Players Stack Up Against the All-Timers?

Next, we will look at how each of the top twelve forwards ranked defensively.