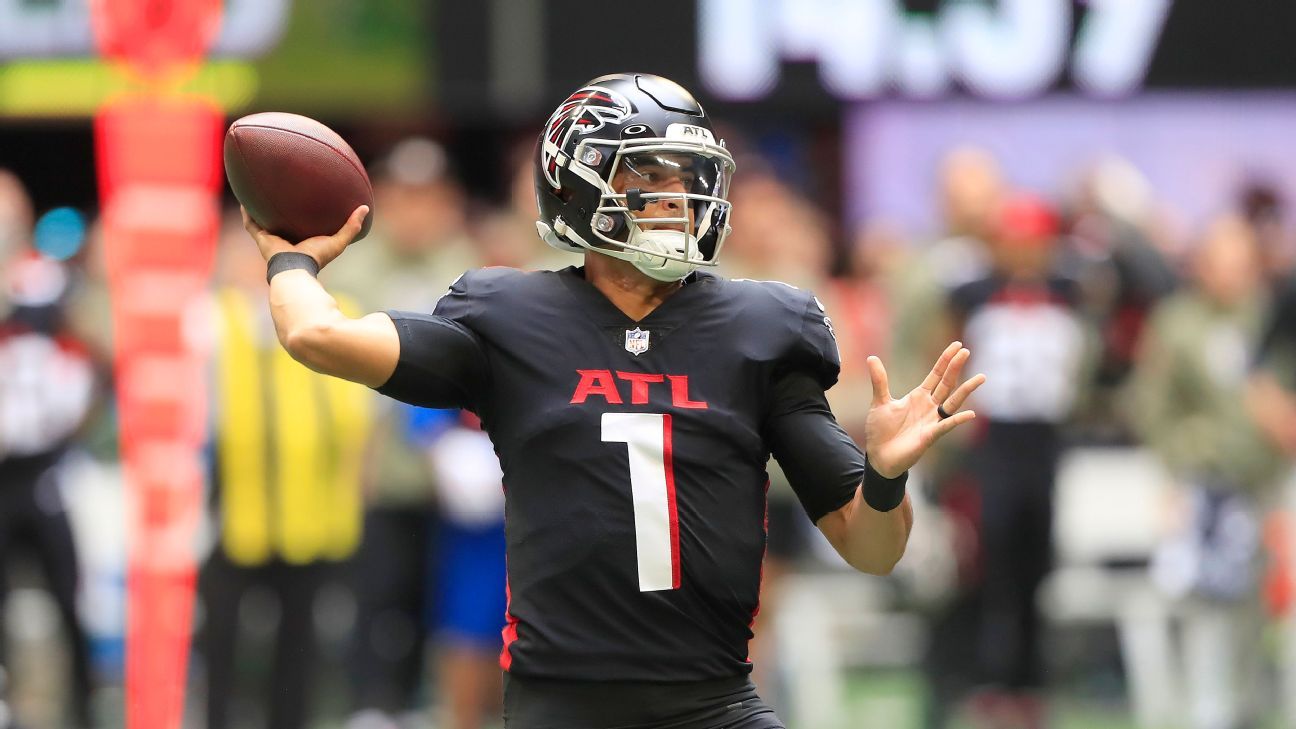 FLOWERY BRANCH, Ga. — When Marcus Mariota was trying to figure out his immediate future as an NFL quarterback in March, he was intrigued by the Atlanta Falcons.

They offered a familiarity with the staff, going back to Mariota’s days with coach Arthur Smith with the Tennessee Titans. They offered a reasonably good contract — two years, $18.75 million with $6.75 million guaranteed. Perhaps more important than anything else: The Falcons offered a chance to start.

Mariota has had a weaving path as a quarterback, from the Heisman Trophy at Oregon to being the No. 2 pick in the 2015 draft by the Titans.

He started for four-plus seasons in Tennessee before being benched and then going to the Raiders as a backup for two seasons. When he reached free agency a second time, Mariota knew opportunities to start in the league are rare.

That is what Mariota walked into when he signed with the Falcons in March, a team that now has approximately $80 million in dead cap money — money paid to players no longer on the team — and at the moment about $8.6 million in cap space.

Yet the Falcons are tied for first place in the NFC South at 4-5, in part because of the play of Mariota and how he fits into the offense and locker room. This is the present for Atlanta, as it prepares to play division rival Carolina on Thursday night (8:15 p.m. ET, Prime Video). The future for Mariota beyond this season, that’s unknown.

“When I was going into free agency, I kind of understood that if I got a chance to play again, it was really going to be probably my last shot,” Mariota said. “Most guys don’t even really get a second shot.”

That Mariota was able to attempt this in a system he knew, with coaches he was familiar with, held importance.

It was a new city and new personnel and a franchise that, literally hours before Mariota signed with the Falcons, traded its longtime starter, Matt Ryan, to Indianapolis after a failed pursuit of Deshaun Watson.

To Mariota, none of that mattered. He just knew this was another shot. For him to have a true future as an NFL starter — with the Falcons or elsewhere — he was going to have to play well.

“To be able to not only keep this job and maybe have a future here was important to me, and I am glad it is here with these guys, with Coach Smith and this staff,” Mariota said. “Because like I said from before, it was almost a point of, just like, redeeming myself from a previous stint that I wanted to come here and prove that I can do it.”

Whether Mariota has done enough is an open question. He has had games where he has looked like the player from Oregon, making on-time throws and using his running ability to confound defenses.

He’s not being asked to throw often in a run-heavy offense, attempting fewer than 25 passes in four games this season. Interestingly, the Falcons are 3-1 in those games.

Mariota has been inconsistent, completing 65% or more of his passes in back-to-back weeks just once this season. Not all of that is his fault. Numbers can be skewed. For example, a throwaway in Atlanta’s offense will alter Mariota’s statistics more than other quarterbacks because his 201 pass attempts are second lowest among full-time starters — the Falcons are averaging 33.7 rushes and 22.3 pass attempts per game. Atlanta’s 53.1% rate of designed rushes is the highest in the NFL, and its 46.9% rate of designed passes (including sacks and scrambles) is the lowest in the league, according to ESPN Stats & Information. The only full-time starters this season with lower completion percentages than Mariota are Chicago’s Justin Fields, Denver’s Russell Wilson and the Jets’ Zach Wilson.

Completion percentage, though, doesn’t necessarily tell the whole story. Mariota is ninth in QBR at 59.9, ahead of Justin Herbert and Joe Burrow. He’s being asked to take deeper shots, too. His 10.09 air yards per attempt are second in the league — behind only Jameis Winston.

When Mariota is throwing, it’s usually deep, which, by logic, would mean a lower completion percentage considering 14.9% of his pass attempts have had 20 or more air yards, sixth in the league (and fourth among full-time starters behind Mac Jones, Fields and Wilson). Mariota has completed 23.3% of his throws of 20 or more air yards, No. 32 in the league, but he also has attempted 30 of those passes, tied for ninth in the NFL with Herbert.

“Those things are not the highest percentage, right? You’re taking low percentage shots, but you have to be able to do that,” Mariota said. “Especially with the way we run the football because it creates just a little bit of uncertainty on the defense of what you’re trying to do.”

In his career, Mariota has completed 33.2% of his throws of 20 or more air yard and during his time as a starter in Tennessee completed more than 43% of those passes in 2016 and 2018. So there is evidence he can improve, and it’s an area in which Smith has said Atlanta needs to get better.

When the Falcons signed Mariota, they knew the style of quarterback they were getting, and that the offense would be different than it was under Ryan.

“When it comes to looking at the quarterback spot, I don’t think it’s one size fits all,” offensive coordinator Dave Ragone said. “And Marcus provided an opportunity for us offensively to go in different directions and expand on different things that we thought best fit us.”

Mariota has an ability few other quarterbacks possess. His movements can sometimes look more like a boxer delivering a feint or a point guard using a jab-step or shoulder-shimmy fake. It does enough to get a defender off balance for a second and creates one of two things — a crease for Mariota to run through or a passing window where there wasn’t one.

He has done both often this year, including Sunday against the Chargers. At the Los Angeles 46-yard line in the middle of the third quarter, linebacker Kenneth Murray Jr. didn’t bite on Mariota’s play-action, meaning as Mariota rolled right, Murray was in the passing lane.

Mariota faked an upfield move. Murray cut inside, giving Mariota room to float a pass to Kyle Pitts for a 9-yard completion and a first down.

“Certainly he’s got that instinct, and it’s how he’s been successful in this league and certainly coming out of Oregon,” Smith said. “He’s got a great feel in space.”

His ability to maneuver defenders — to the point where it has become almost completely instinctual — came from a childhood playing soccer. Even now, he’ll go back and watch a play and be like, “I did that?” when he sees himself moving a defender off position or, in his best example from 2022, when he fell down against the Rams and popped back up.

It is that feel, which in Smith’s offense has designed runs, zone reads and pre-snap movement, that has fueled Atlanta’s success. The Falcons have had pre-snap motion on 329 plays, fifth in the league, and helming that offense is a skill that takes time. Add in the Falcons’ 117 play-action plays (second in the league comprising 48.3% of Atlanta’s dropbacks) and it’s a lot for many quarterbacks.

But his ability to run and extend plays make him dangerous. Against Carolina in Week 8, his decision to keep and run in overtime led to a 30-yard gain on the eventual winning drive.

Atlanta is using Mariota as a runner more than any other time in his career. With 60 carries and 304 yards, he is four carries and 53 yards away from his career-highs — both set in 2018 — and a key part of the Falcons’ top-five rushing offense.

Cordarrelle Patterson, the Falcons running back, said watching Mariota run gets him “fired up,” because of how he runs. He says they have something in common: They are OK with being hit.

“I just respect him a lot of ways,” Patterson said.

When Mariota first got to the NFL, he was determined to be a pocket passer. His father, Toa, and his brother, Matt, who is now playing quarterback in a league in England, kept reminding him it was OK to run. To use what worked so well at Oregon in the pros, too. Playing that way now, Mariota said, is playing “a little more like myself.”

“To be able to have a mobile quarterback like that, in this type of offense when we run the ball a lot, defenses have to think, ‘Is he going to take off? Is the back going to take off?'” receiver Drake London said. “‘Or is he going to sit back there and throw it to one of us?’ So it gives us a lot of different ways to get the ball and disperse it.”

Mariota also has gotten more settled into a starter’s role. Early this season, he said he was adjusting to his new old role, both running and passing. For example, in the past three weeks, he has slid a lot more to help avoid getting hit when early in the season he did not.

He also has been more cautious with the ball. After fumbling seven times in the first five weeks — losing three — Mariota has fumbled once over the past four games. Of his six interceptions, four came in the first month of the season, and he has thrown two — both against Carolina in Week 8 on deep pass attempts — over the past five games.

It’s an offense that took Mariota a little while to get used to, but one he believes fits his skills.

“We do a great job of hiding some of the run stuff that I do, but also allowing me to kind of play free in the pass game, doing some different things, whether it’s play-action stuff, whether it’s keepers, whether it’s dropback,” Mariota said. “So it’s not necessarily one specific thing. I think because we do a whole range of different things, it allows me to just kind of express my talents and do what I do.”

There’s another part of this uncalculated by statistics. The calming presence Mariota provides is immeasurable, especially for a young team. When running back Caleb Huntley enters a game, Mariota settles his nerves.

The easygoing style endeared Mariota to his teammates. He might get fired up after a play. By the time he returns to the huddle, it’s the same collected player his teammates saw the play before.

“With Marcus you’re going to get the truth,” Smith said. “That’s why people like him.”

“The way he conducts himself on the field is very easygoing, reassuring but also very assertive at the same point,” offensive lineman Chris Lindstrom said. “He’s incredible to play for and play with. You just have a love for him because you love the person and the player he is, you have an appreciation for the way he goes about attacking work.”

It might not seem like a lot, but little things like that do matter. Coaches and teammates buy into Mariota and what he has been able to do — on the field, during the week and between plays.

What this looks like long term is unclear. There’s a half-season to go, and the only thing potentially guaranteed for next season — but not now — is a $3 million roster bonus if he’s on the team the fifth day of the next league year. Mariota knows this. He has lived it — from starter to backup, from a quarterback who took a team to the playoffs to losing his job midseason.

So how is Mariota playing this year? The main judge will be Smith, who pointed to one thing: where the Falcons are in the NFC South standings.

“To be right where we are,” Smith said, “in the middle of the race.”