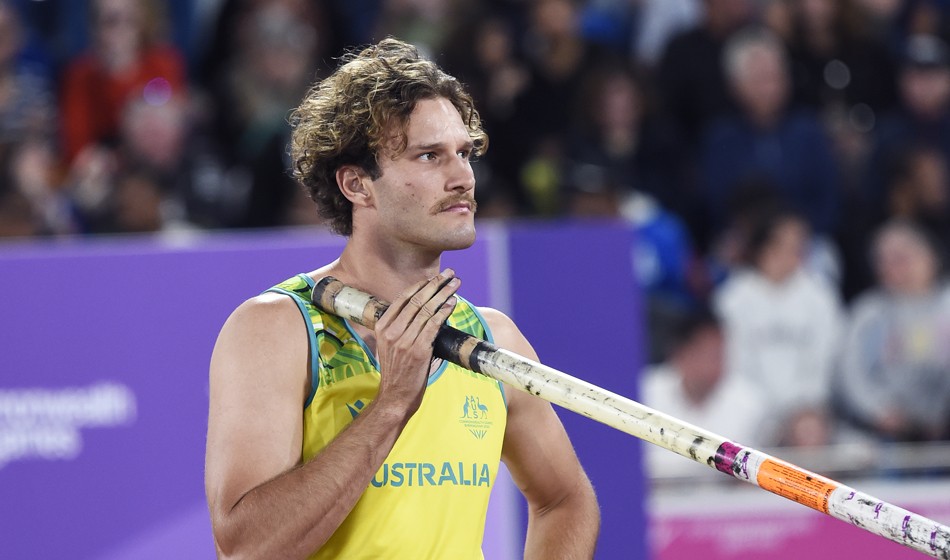 Kurtis Marschall of Australia successfully defended his Commonwealth pole vault title with a best clearance of 5.70m ahead of English duo Adam Hague and Harry Coppell on Saturday (Aug 6).

Hague and Coppell enjoyed terrific support on the top bend of the track where the pole vault runway has been relocated to since the Alexander Stadium was rebuilt.

But they had to settle for minor medals with Hague clearing a season’s best of 5.55m in second and Coppell, the British record-holder, clearing a best of 5.50m as the top three finished well clear of the rest of the field.

Marschall, 25, took up the pole vault after being inspired by watching fellow Australian Steve Hooker win the Olympic title in Beijing in 2008.

At the end of his competition on Saturday, too, he tried to break his hero’s Games record of 5.80m which was set in Melbourne in 2006 but his efforts at 5.81m fell flat despite enthusiastic support from a small number of hardcore fans who stayed behind until gone 10pm after the track action had ended.

Medals on home turf for both Adam Hague and Harry Coppell who clear 5.55m and 5.50m respectively in the men’s pole vault 🏴󠁧󠁢󠁥󠁮󠁧󠁿

The Alexander Stadium crowd were fixated. #B2022 pic.twitter.com/3GiCaZNGkY

Canadian success in the women’s hammer

Camryn Rogers won world silver in the women’s hammer last month behind Brooke Andersen of the United States and in Birmingham she stepped up to the top of the podium with gold for Canada with 74.08m.

Julia Ratcliffe of New Zealand took silver with 69.63 while Jillian Weir threw 67.35 to win bronze 40 years after her father, Bob Weir, won the men’s hammer title for England in Brisbane.

“Every competition is a learning opportunity and today exhibits that,” said Rogers, who has progressed from winning the world under-20 title in 2018 to become one of the best seniors in the world. “I was a little nervous at the beginning with the first two fouls.

“To come back and get [the winning distance] in the third round was great. We trained for every possible outcome. The first couple felt really good. They were just a little bit off.

“After the third round, we just tried to build on it. Now we will get ready for next year, learn from this entire experience and come back stronger.”

Weir said: “I’m happy to be in ‘Brum’ and to be here with friends and family. I’ve got family down the road, which has been exciting, and the Birmingham crowd have been absolutely mental, so I’m happy to be part of it.

“We have got six hammer throwers here, so we’ve been able to fill the field. We’re rallying around each other, so to have a gold, a silver and a bronze among the members of Team Canada is a really big deal.”

The leading athletes from the home nations were Amber Simpson of Wales in fifth with 66.52m and Anna Purchase of England in seventh with 64.73m.