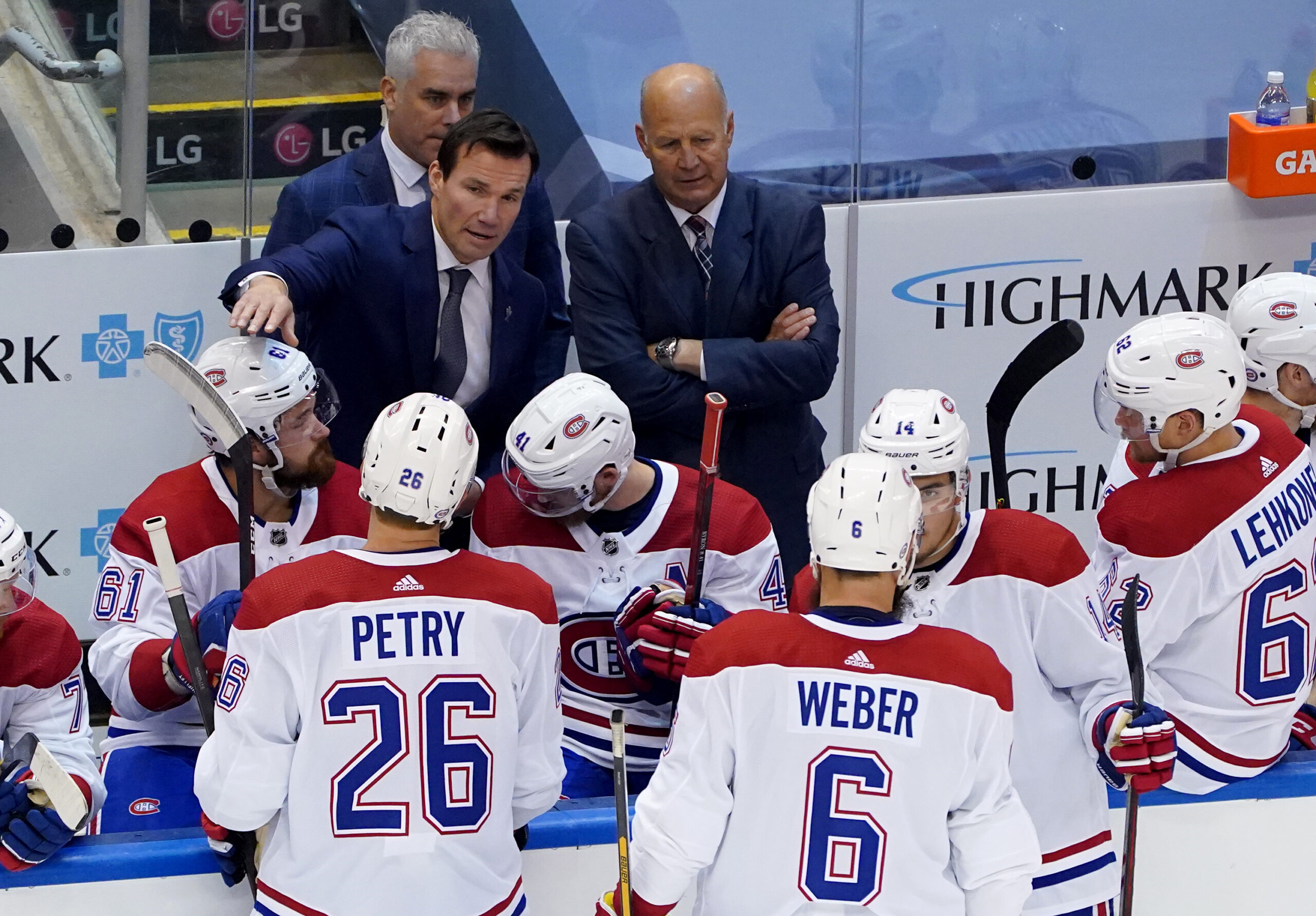 Welcome to the July edition of Blackhawks Bytes, a series featuring quotes and comments from players, coaches, management, journalists and fans alike concerning everything Chicago Blackhawks. The purpose of this ongoing column is to capture a slice of the existing outlook, attitudes and culture surrounding the team. Please join me as we have some fun with the everyday, albeit fascinating aspect of human nature; the power of words.

Here we are, at the end of July and in the dog days of the offseason. The 2022 NHL Entry Draft has come and gone, and the ensuing free agency frenzy has fizzled to a dull roar. But never fear; I’ve been collecting Blackhawks quotes and quips along the way to keep us all entertained. Let’s look at some noteworthy Blackhawks words of wisdom from the month of July.

The Blackhawks held their development camp the week of July 11, and all the newly drafted prospects were in attendance. Frank Nazar was the No. 13th overall pick, and the Blackhawks obviously have high hopes for the young forward. He’s best known for his speed and edge work, a well-balanced game and a nose for the net. But a very important question remains; what will be his nickname?!

Draft pick Frank Nazar says people nicknamed him “Frank Sinatra” because “I do it my way,” but he’s open to suggestions from Blackhawks fans. pic.twitter.com/IobJMogVmP

Hmm, Frank Nazar/Sinatra. How can we get creative with this? Nazatra. Son of Sinatra. Frankie does it his way! You know the great Pat Foley would’ve had some fun if he was still broadcasting when this young man made his NHL debut.

Ah well, hockey isn’t show business. We should prepare ourselves Nazar’s nickname being something boring, like “Naz”.

Speaking of entertainment, Andrew Shaw always had a flair for the dramatic. So when Duncan Keith announced his retirement on July 12, Shaw joined a number of Keith’s former teammates in congratulating him on his esteemed career. But Shaw added his unique personality to the salutations.

Now that’s the Shawzy we know and love! Where the heck was that Shaw when he helped out in the studio last season, and instead came across as stilted and uneasy?! Unleash the real Shaw, and that would at least make for some entertaining commentary next season.

It was fun while it lasted, but the Alex DeBrincat/Dylan Strome/Patrick Kane line is nevermore. We all know by now DeBrincat was traded to the Ottawa Senators on the eve of the draft, and Strome signed a one-year deal with the Washington Capitals.

In an exclusive interview with NBC Sports Hawks Insider Charlie Roumeliotis, Strome discussed his relationship with DeBrincat both on and off the ice.

Obviously, he’s a great friend of mine. He was in my wedding party and I was in his, and we’ve kind of grown up together and we lived together for a little bit in junior. And then he took me in when I first got to Chicago, I lived with him for a couple of weeks before I got my own place.

So many good memories, and obviously our connection on the ice speaks for itself as to what we were able to do together, and with Patrick Kane, of course. It was one of my favorite lines, probably my favorite line I’ve ever played on — don’t tell Taylor Raddysh. It’s something I’m going to miss, for sure. They’re two unbelievably good players and two really good friends.

“Probably my favorite line I’ve ever played on.” I’m not crying, are you crying?!

It’s bittersweet for sure. That trio was certainly fun to watch the last half of the 2021-22 season. Their run-and-gun style of hockey was as entertaining as it gets; who needs defense anyway? Thank you to then-head coach Derek King for putting them together and giving us this show in the midst of an otherwise crappy season.

Which brings me to my next subject, the fact that King has been retained as an assistant coach for the Blackhawks. He is also joined by Kevin Dean, formerly an assistant coach with the Boston Bruins. King will oversee the offensive end, and Dean the defensive end. New head coach Luke Richardson spoke to what both men will add to the coaching staff.

Luke Richardson on hiring of Derek King and Kevin Dean as assistants: “Derek has made an impact here on this organization and I’m thrilled to have someone like him on our staff. Kevin’s mind for the game and defensive focus will be an asset for us.” #Blackhawks

I personally think it’s phenomenal that Richardson was amenable to keeping King on. After all, King has made great strides with many of these players. He’s already laid the groundwork, and now he will have a chance to follow through on what he started.

Kudos to Richardson, also, for not letting his ego get in the way. It would have been easy for him to say he wanted to start fresh. But he obviously saw some value in what King had to offer and what he accomplished in his short tenure as head coach. It will be fascinating to see how this coaching group steers the ship through the trials and tribulations of a rebuild.

We know Coach King from last season, and we’ve learned a whole lot about Coach Richardson since he was introduced as the 40th head coach of the franchise. But what about Coach Dean? Here he talks about his overall plan with the defense.

Dean touches on how they will stress what’s expected of the defensive corps overall, how they will compete as a group. But then he speaks about giving the younger defensemen more one-on-one time to perfect some of the intricacies of the game the more experienced defensemen already know.

This is what development should be all about, while still holding everyone accountable as a group. It’s a matter of “striking that balance”. We’ll all be watching to see if they can do so.

Let’s wrap this up with some excellent news! Coach Richardson has already gone on record that he plans to change the defensive scheme from man-on-man to zone defense.

Zone defense is going to be way more structured than man-on-man where you’re flying all over the place. I just don’t think you can do that in the league unless you’ve got elite, elite skaters and thinkers out there. And I think with a rebuild with the younger group, a real good structured, hard defensive zone where you stay in your zones, you’re passing off players, but the whole thing is when it’s your time to kill a play and get the puck back, we’ve got to be really strong at that. So individual one-on-one battles, it’s going to be something we work on from Day 1.

This should be music to the ears of Blackhawks fans! Former head coach Jeremy Colliton insisted on man-on-man coverage. Yes, it’s used by many NHL teams, and is a very good system. If you have the right defensemen to do the job.

But if you don’t, it simply causes more confusion. Forcing hockey players to think too much is never a good thing. They should be acting on instinct out there, especially with the game being as fast as it is now. Colliton was too stubborn about this. He wasn’t designing a system to work around his players; he was forcing his players to work around his system.

Will this new system help the defense out in the long run? Let’s hope so. Here’s to more defensive success in 2022-23!

That’ll do it for this July edition of Blackhawks Bytes. Keep checking in to The Hockey Writers for all the latest news and analysis as the offseason unfolds. Before we know it, we’ll be talking about training camp and preseason games. We’ll see you in August for the next installment of Blackhawks Bytes!

Gail Kauchak has covered the Chicago Blackhawks as a content writer since 2014. She previously wrote for Fansided’s Blackhawk Up, and has been part of The Hockey Writer’s team since 2017. It’s not always easy to balance life’s responsibility’s with one’s passion, but Gail’s doing her best to make it happen. Quote to live by, “Follow your dreams, and good things will happen.” Wait, maybe it’s “Good things happen when you shoot the puck!” You get the idea.

Follow Gail for her unique commentary about this storied franchise. And be sure to catch her and the rest of the Blackhawks’ crew on their weekly Blackhawks Banter show, as well as follow her on Twitter.