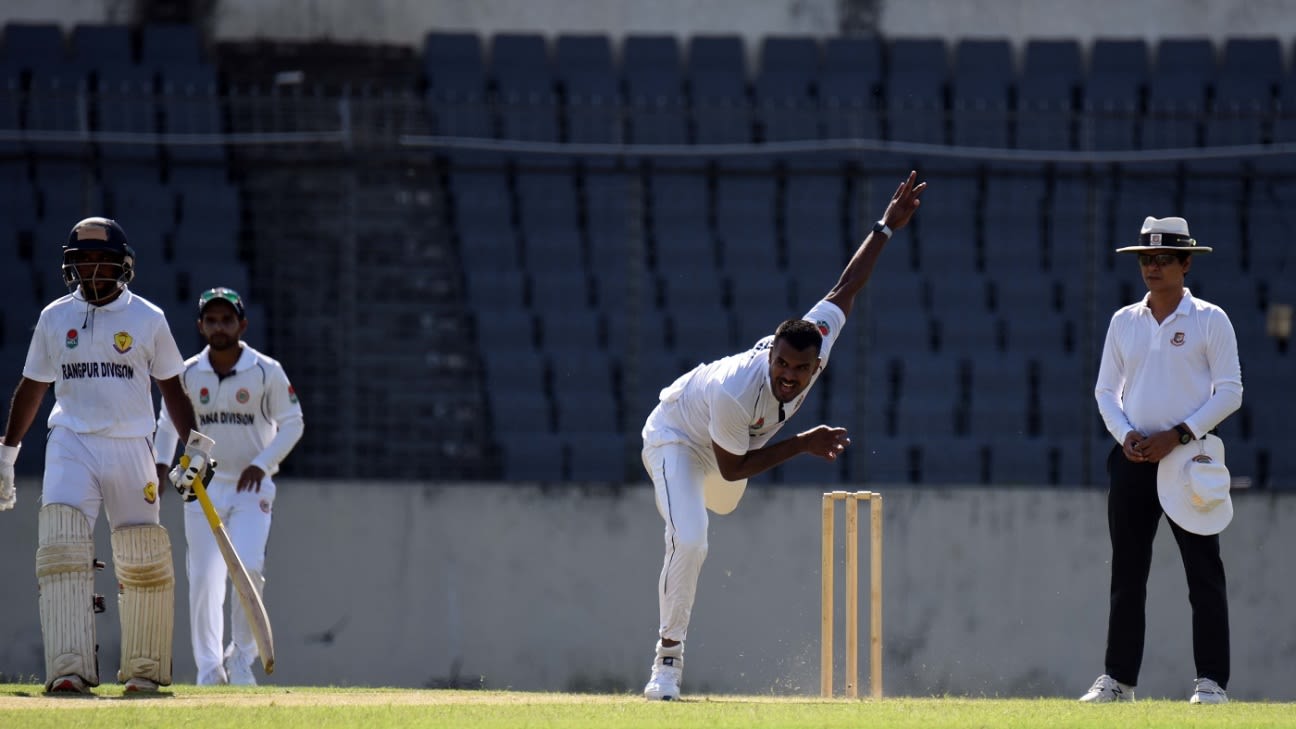 Rangpur Division took a big lead in the NCL’s Tier-1 points table after their ten-wicket win over Chattogram Division in Savar. Sylhet Division now have to win their last-round match against Rangpur to clinch their maiden title, having fallen behind following their 333-run loss to Dhaka Division.
Dhaka Metropolis gave themselves the best chance for promotion from Tier-2 after their two-wicket win against Rajshahi Division. Khulna Division meanwhile got their first win of the season, a ten-wicket hammering of Barishal Division.
Best batters
Eight centuries were recorded in this round, with the Dhaka pair of Abdul Mazid and Shuvagata Hom leading with the most effective ones. Dhaka were bowled out for 113 in the first innings, but their bowlers fought back as Sylhet Division were shot out for 76. Dhaka then slipped to 136 for 4 with three of their top six getting ducks. However, Mazid and Hom steadied the ship adding 254 runs for the fifth wicket and completely change the direction of this game. Mazid top scored with 176 with 11 fours and seven sixes, while Hom struck 16 fours and three sixes in his 145.
Rangpur Division’s cruise to a big win over Chattogram was made easy by veteran Naeem Islam reaching his 29th first-class century. He was unbeaten on 131 off 251 balls with 11 fours and a six. He was at the crease for more than six hours to ensure Rangpur got a 263-run first innings lead. Chattogram’s Pinak Ghosh struck a century off 264 balls with ten fours, but could only take his side to even Rangpur’s first innings score.
Dhaka Metropolis’ Mohammad Naim and Sharifullah struck centuries against Rajshahi Division. Naim raced to 112 off 105 balls with nine fours and five sixes, while Sharifullah rounded up an exact 100 off 129 balls with 11 fours and three sixes in response to Rajshahi’s 252.
Tanzid Hasan struck 101 in the first innings with seven sixes and six fours while Test star Mushfiqur Rahim missed out on a second-innings century, getting out for 97.
Moin Khan reached his maiden first-class century, recording 102 with seven fours and two sixes after Barishal were asked to follow-on in their defeat against Khulna.
Best bowlers
Rangpur’s pace duo of Robiul Haque and Musfik Hasan got them to a strong position. Robiul was the star as he finished with 5 for 13 in the first innings against Chattogram. Musfik’s 4 for 60 was crucial too.
Sylhet were put on top with Enamul Haque‘s 5 for 33 against Dhaka who were rolled for 113, but Dhaka’s pace duo of Salauddin Sakil and Sumon Khan shared 15 wickets between them, giving Dhaka a 37-run lead. Left-arm quick Sakil took 5 for 14 and 3 for 52, while Sumon finished with seven wickets in their big win over Sylhet. Rajshahi’s Nahid Rana continued to impress everyone with his 5 for 76 and 4 for 51 against Khulna.
Best match
Dhaka Metro’s two-wicket win against Rajshahi did not provide just a thrilling finish, but also an important result. Batting first, Rajshahi were bowled out for 252 runs led by Tanzid’s 101. Left-arm spinner Rakibul Hasan took four wickets, while Abu Hider and Sharifullah took three each.

In response, Sharifullah and Naim struck hundreds as Dhaka Metro took a 121-run lead after they were bowled out for 373 runs. Rajshahi were then bowled out for 297, with Sharifullah again doing his job with the ball, taking 4 for 59. Chasing 177 to win, Dhaka Metro found it tricky as they lost regular wickets until Hider and Rakibul took them home with a 15-run unbroken ninth wicket stand.

Points to ponder
Sylhet need to beat Rangpur outright by eight points to win their maiden title, while Rangpur needs only a draw to lift their second NCL trophy. Dhaka Division have a chance but only if they win by an innings or ten wickets.

Dhaka Metro are on 25 points, Rajshahi on 22 and Barishal on 19. The top team from Tier-2 will get a promotion to Tier-1.

Players to watch
Salauddin Sakil and Sumon Khan have been excellent for Dhaka during this season. They have combined to take 47 wickets at an astounding bowling average of 9.42. Their strike rate is 23, as they have taken three five-wicket hauls between them. Sakil has done well in the past, and this could be Sumon’s breakout season.