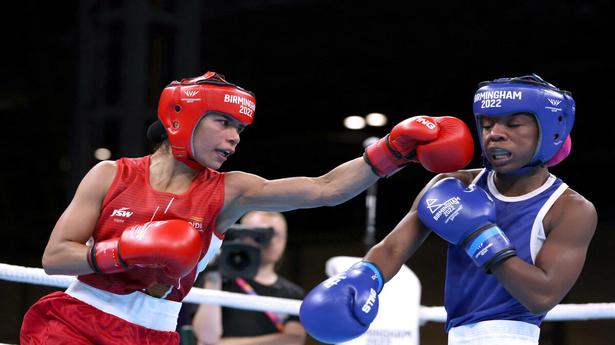 Nikhat, who won the 52kg world title in May, beat the lesser-known Helena by the referee stopping the contest in the third round. She will meet Wales’ Helen Jones, who has the experience of competing in the European under-22 and World championships, in the quarterfinals on August 3.

It was a walk in the park for Nikhat, who maintained a good distance and landed combinations on counterattacks to take the first round convincingly.

The Indian displayed more aggression and rained headshots in the next two rounds. Helena got a standing count before the referee stopped the contest in the final period.

Against a taller southpaw, Thapa moved in and out to score through some solid right punches and win the first round with a unanimous decision.

However, Lynch stepped up his attack to close the gap as the contest was evenly balanced after two rounds.

Lynch took the highly physical final round amid a heavy exchange of punches and ensured a 4-1 victory.

Asian champion Sanjeet Kumar was stunned as he won two rounds but ended up losing his 92kg bout to Samoan Ato Plodzicki-Faoagali with a 3-2 verdict on Saturday night.

Two judges each scored in favour of Sanjeet and Ato, while Sri Lankan Susantha Thennage’s scores showed a 28-28 tie. Later, Susantha – who gave the first two rounds 10-9 to Sanjeet – ironically picked the Samoan to break the deadlock.