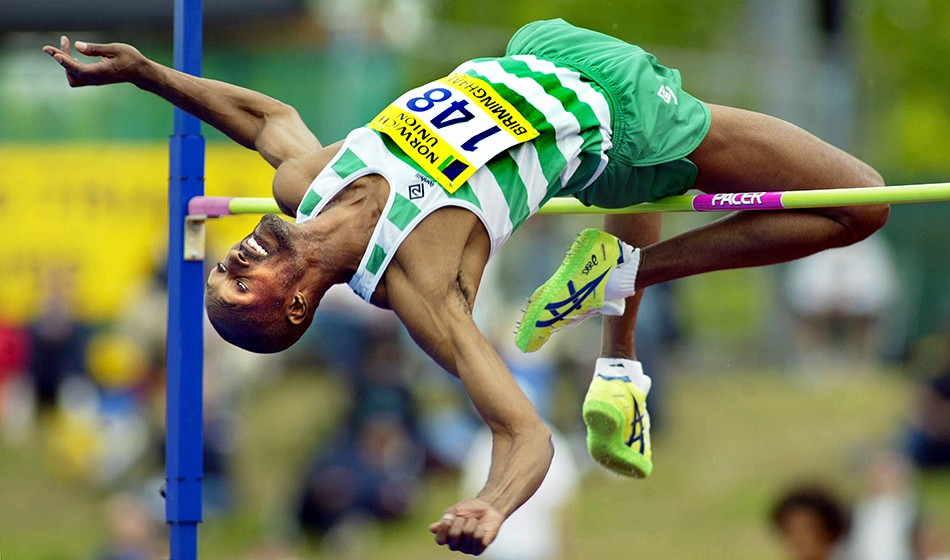 A European indoor champion in 1994 and a Commonwealth Games gold medallist in Kuala Lumpur in 1998, it’s ironic that the 56-year-old who sits opposite me perhaps had his greatest performance back in 1991, on a day where he failed to make the podium.

Incredibly his superb 2.36m jumped in Tokyo was good enough only for fourth on that day at a World Championships most famous for a titanic battle between Carl Lewis and Mike Powell, with the latter eventually prevailing and superseding the exploits of the great Bob Beamon in the long jump.

The Greatest Show On Earth

Dalton Grant went to three Olympic Games in Seoul (1988), Barcelona (1992) and Atlanta (1996), with seventh place in Seoul being his best performance at ‘The Greatest Show on Earth’. One senses he feels that he never did himself justice on this stage and while he keenly tells me about his work as a board director for London 2012, I can see his sadness as he recalls: “The joy of winning the bid was overshadowed when the London 07/07 bomb went off a day or so later.”

Grant is keen to credit a plethora of coaches and mentors who he feels privileged to have worked with during the course of his career including Ron Wyld, Ian Grant, Richard Gyesie, Daley Thompson, Elżbieta Krzesińska, Colin Jackson, Linford Christie, Keith Connor, Malcolm Arnold, Tudor Bidder and some of the years he was also self-coaching. Significantly he was also guided by Frank Dick, the British Athletics director of coaching from 1979 to 1994. In addition, he learned from the late, great Bruce Longden who guided Sally Gunnell to Olympic 400m hurdles gold in Barcelona (1992).

Grant feels that he learnt so much in his journey as a world-class athlete, that’s what has driven him to set up Dalton Grant Academy to pass back his knowledge to the next generation. “I was fortunate to be surrounded by winners like Linford Christie, Colin Jackson and Lord Coe who was my team-mate at both club and country,” he says. “We both played a part in bringing the 2012 Olympics to London.

“I was added to the London 2012 team before Lord Coe by Barbara Cassani, who was the first leader of the 2012 London bid team. We all took what you could describe as a ‘gladiator’ approach to competition.”

He is keen to credit the iconic Ron Pickering, who died in 1991 with being inextricably linked to a golden period in the 1980s when he was coming through from a European Junior Championships sixth place in Germany in 1985 to his first major senior championships at the Commonwealth Games in Edinburgh 12 months later.

Grant served as a GB team captain during the aforementioned ‘golden era’ and I’m keen to press him on how he found this role. With candour he says: “You will always have athletes with ego problems.”

Clearly it has given him those transferable skills central to the ethos of his Academy as he points out that “sometimes you have to give people tough love and you need to be honest with people. You have to listen and give advice as to how to produce the goods under pressure.”

Grant takes understandable pride in reminding me that he jumped 2.30m or more more than 50 times and started over 2.30m three times in his career. He still holds the world record for opening height from the 1997 World Championships staring at 2.32m. The reason why he came in at this height was that he was carrying an injury and he knew he only had a limited number of jumps in him.

This gives you an insight into the mindset of this great British jumper. This being said he tells me that it was all about focusing on the process rather than being goal driven, as he explains: “I visualised and jumped to that picture as opposed to the bar.”

Born in Hackney to parents from Jamaica, Grant was no stranger to racism in the climate of the 1970s and 1980s. “I came from a deprived area of London and was fully aware of ‘no blacks, no dogs, no Irish’.”

His first experience of seeing the struggles of black people was seeing the TV series Roots and then feelings of being harassed by the police through the SUS laws, which pre-dated the reforms of the Police and Criminal Evidence Act (1984), when he was just 12 years old.

After his first Olympics representing Britain, at the age 22 and driving a Mercedes he was stopped and searched on his way to training with a decathlete, Gavin Sunshine, and feels this was due to the combination of his ethnicity and his driving a nice car.

So with this context, his experiences have been put to great use as a force for the social good as a regular contributor to Black History Month, which has included a Sky TV panel appearance. He’s come a long way since his childhood fantasy of becoming a professional footballer – clearly he saw sport as a way out of marginalisation and he is understandably proud that he has given his own children opportunities such as being able to go to university.

Three decades on from his heyday, Grant is rightly loud and proud in asserting that there is no bar to achievement.