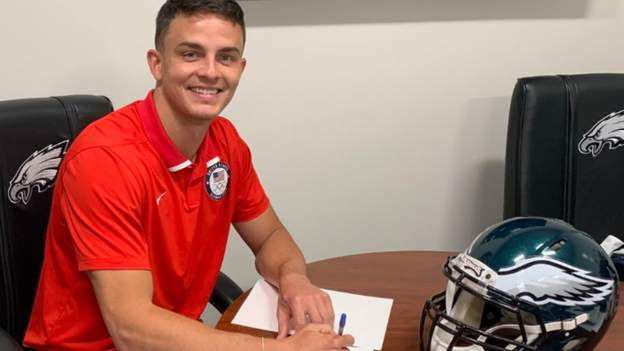 But nine days after missing out on gold at the World Athletics Championships, the American has swapped his running spikes for football cleats.

Allen, who played American football at college, joined the Philadelphia Eagles this week hoping to make their team for the 2022 NFL season.

“It’s now or never because I don’t want to get too old,” said the 27-year-old, who is a two-time Olympian.

In his first year as a wide receiver at the University of Oregon, Allen caught 41 passes for 684 yards and seven touchdowns before focusing on athletics.

He became a three-time national champion and finished fifth at Rio 2016 and fourth at the Tokyo 2020 Games last year.

But with time running out to pursue an NFL career, in April he took part in Oregon’s ‘pro day’, when NFL hopefuls aim to impress before the draft.

Allen did just that, running the 40-yard dash in 4.35 seconds to earn an invite to the Eagles’ training facility the following week.

A day after his visit, he signed a three-year contract as an undrafted rookie.

First he had the opportunity, though, of making a poignant exit from athletics – for now, at least – as this year’s world championships were held on the same Oregon track where he starred as a college athlete.

The stars seemed to be aligning as Allen claimed victory at three events this year, including a world-leading time of 12.84 seconds to win the New York Grand Prix in June.

Yet after being the fourth-fastest qualifier for the worlds final in Eugene, Allen was disqualified for a false start by the slenderest of margins.

His reaction time was 0.099 secs, one-thousandth of a second inside the threshold of 0.1.

“It’s frustrating,” said Allen. “But I do know that I have the quickest reaction time in the world.”

Allen had a week to process that setback and prepare for his return to football in Philly.

Having last played a game in 2016 during his final year at Oregon, he must hit the ground running to earn a spot on the Eagles’ 53-man roster.

“The good thing is I haven’t been getting beat up in the NFL for six years and I’m probably the fastest and most athletic I’ve been in my entire career,” Allen told the Dan Patrick Show last week.

“My goal is to be the best hurdler ever and I still have a chance to do that,” he added. “And my goal is to play in the NFL, and help the Eagles win a Super Bowl.”