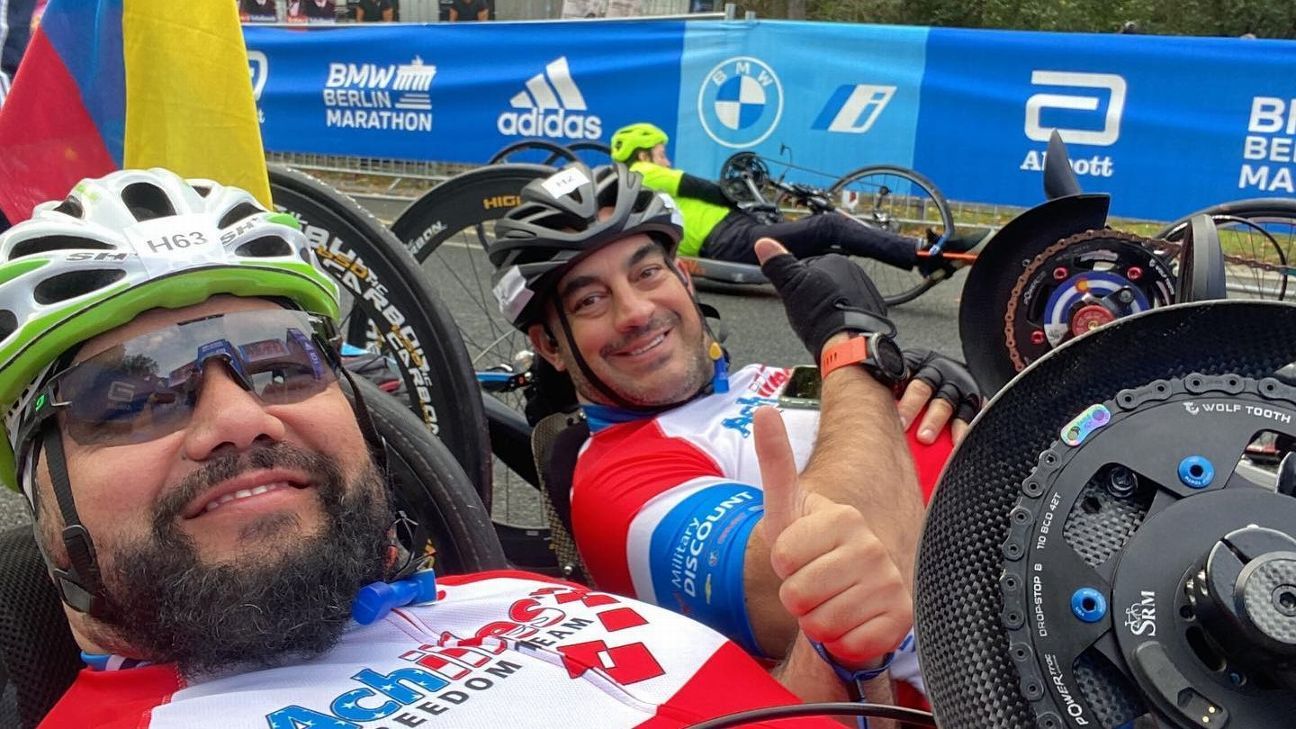 As Pierry Duvan Ramirez continues his quest to race all six World Marathon Majors, he will be sure to take in his surroundings at Sunday’s New York City Marathon. The 46-year-old Colombian national, who is paralyzed from the waist down, will use a specially outfitted handcycle wheelchair to reach the finish line, after which he’ll go back to the more standard model he’s used for nearly three decades.

Ramirez’s life forever changed as a result of the consequences of Colombia’s illegal drug trade of the 1990s, but his sense of service has remained intact. Since 2007, he has been a part of Achilles International, a nonprofit organization founded in the United States dedicated to providing support for differently abled athletes around the world.

“The happiness I feel when fulfilling my duties and when serving others truly motivates me,” Ramirez told ESPN. “I feel a great deal of satisfaction to be able to bring this opportunity to others, to share my experience and change their lives because of it.”

In helping more than 50 athletes with disabilities enroll in some of world’s foremost marathons, Ramirez hasn’t neglected the pursuit of his own goals, competing in marathons and other long distance races for the past 15 years.

As Ramirez was fulfilling his military service with Colombia’s National Police in July 1994 — a time when the country was undergoing a transition in the wake of drug kingpin Pablo Escobar’s death — the patrol vehicle in which he was a passenger was targeted by a bomb planted by FARC guerrilla forces as it crossed a bridge. The ensuing explosion caused the officer driving to lose control of the vehicle, which crashed into a ditch. The spinal cord injury Ramirez suffered as a result left him paralyzed.

Further, a bone fracture suffered after the incident that would not set led to the amputation of Ramirez’s right leg. Still, he refused to let these circumstances reduce him. After a period of rehabilitation, he went on to earn a speech therapy degree from Colombia’s Manuela Beltran University.

Though he started competing in events in Colombia during the late ’90s, most of the races available to him during that time were limited to 5 or 10K circuits. His hunger for bigger challenges on and off the track led him to join Achilles.

“After I ended up in a wheelchair, right away I started to look at options so I could compete in races. Achilles opened up my possibilities to compete outside of Colombia,” Ramirez said.

The desire to compete has led him to marathons in Miami and Boston, among other places. Three years ago, Ramirez — who lives in Bogota — traveled to Washington D.C. as part of a group of differently abled Colombian athletes who were honored at the White House and the U.S. Congress.

Earlier this year, he raced the Berlin Marathon for the first time.

“I didn’t really grasp the grandeur of that race [in Berlin] until I was there experiencing it,” he said.

As part of his work to empower himself and other differently abled athletes, Ramirez works as a program coordinator for the International Narcotics and Law Enforcement Survivor Assistance Program in conjunction with the U.S. Embassy in Colombia. The organization helps former police and military members who were injured in the line of fire fighting terrorism and crime.

Through the program, Ramirez has been able to work with American and Colombian athletes, shuttling both groups between countries to build bonds with each other. Each year, Ramirez hosts U.S. military officers who participate in races with members of Achilles’ Colombian chapter in Cartagena, on the country’s Caribbean coast. In addition to veterans of his country’s civil conflict, Ramirez has worked with Americans who served in conflicts in Afghanistan, Iraq and Vietnam.

“Pierry uses his connection with the Colombian National Police and the U.S. Embassy to help make people’s lives more fulfilling. He knows a catastrophic injury does not have to stop you and wants to show others there is so much more that is possible,” said Janet Patton, vice president for event production at Achilles. “Something special about this partnership for our first responders and veterans around the world is that it ignites the service element within them to pay it forward.”

After competing in New York City — and with Berlin and Boston already scratched off — Ramirez will continue tackling the rest of the World Marathon Majors left on his list: Chicago, London and Tokyo. Should he complete these marathons, he would join a select group of runners dubbed as “Six Star Finishers” (of which there are currently 8,067 on record). That’s a distinction Ramirez hopes will inspire others to follow his example and drive more differently abled people in Colombia toward athletic pursuits in general.

Ramirez, who also competes in paracycling, is a former president of the Colombian Paralympic Committee who lobbied to have the country host the first Parapan American Cycling competition in in 2007. During the Tokyo 2020 Paralympic Games, Colombia fielded a record 61 athletes who won 24 medals, marking the country’s best performance at the competition. Seven stood on the podium for athletics, including a silver medal for Darian Jimenez in the women’s 100-meter dash.

“We honor the commitment of first responders like Pierry, who served on the frontlines. Achilles is here to encourage them to achieve their goals, whether a marathon run or a walk or roll in the park,” said Emily Glasser, president and CEO of Achilles. “Pierry embodies the spirit of Achilles International and demonstrates how a run can transform lives.”

In New York City, Ramirez says he’ll prioritize focus in order to complete the task at hand, as he does for most races, yet will also allow himself to bask in the surroundings of one of the world’s great races as he did in Germany earlier this year.

“We can do anything in life, no matter what condition we’re in,” Ramirez said. “Walking or sitting in a wheelchair are just two different ways of getting around. Being happy, on the other hand? That’s something we can all choose to be.”