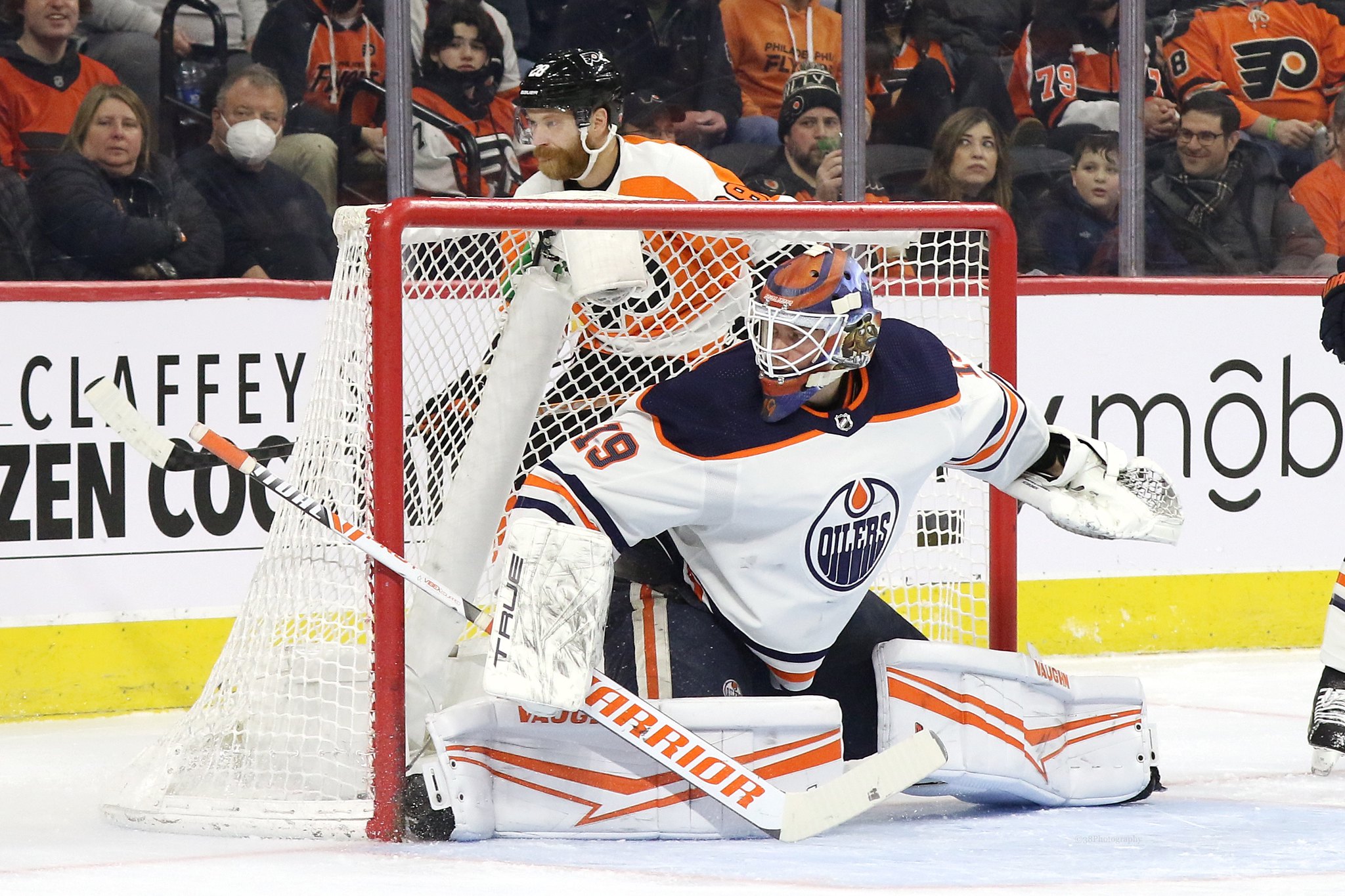 It finally happened. The moment that so many in Oil Country have been waiting years for, Mikko Koskinen’s exit from Edmonton.

On Monday, the veteran goalkeeper signed a two-year contract with Swiss club HC Lugano, bringing an end to the Finn’s four-year stint with the Edmonton Oilers that will forever be defined by his infamous contract extension.

On the scale ranging from “good riddance” to “tearful goodbye”, news of the 33-year-old Koskinen’s departure registered much closer to the former. Edmonton sports talk radio was filled with listeners sarcastically sharing their favourite Mikko memories. But no one expressed genuine appreciation for Koskinen, and that’s too bad.

There may not be a player who was the focus of more fan frustration for a longer period than Koskinen. Other Oilers have had it worse, but they were usually gone before long. Koskinen had to hear it for three and a half years; 1,239 days, to be precise.

Koskinen initially joined the Oilers as a free agent on May 1, 2018, signing a one-year deal after the former New York Islanders draft pick (second round, 2009) had spent the prior five seasons in the Kontinental Hockey League (KHL). On Jan. 21, 2019, midway through his first season in Edmonton, Koskinen signed a three-year contract extension worth $13.5 million. It was the dubious final act of Peter Chiarelli’s tenure in Edmonton, who was fired just over a day later.

With its average annual value (AAV) of 4.5 million, the three-year deal outraged many and dumfounded just about all Edmonton fans. And from that day forward, it hung like a rain cloud over the head of Koskinen and an albatross around the neck of the franchise. The deal reared its ugly head every trade deadline and start of free agency, as it handcuffed the Oilers’ ability to make some much-needed moves.

As the Oilers continued to spin their wheels, wasting MVP seasons from Leon Draisaitl and Connor McDavid, Koskinen bore much of Oil Country’s misplaced frustration. Was he worth $4.5 million per season for three years? Of course not. If your employer offered you a salary that vastly overpaid for your position, would you turn it down? Of course not. So it wasn’t fair to hold the contract against Koskinen, especially with how wonderful of a team player he proved to be.

While the 6-foot-7 Finn was never a fan favourite (was a #19 Koskinen jersey ever spotted in the seats of Rogers Place?), his teammates loved him. It was evident in on-ice interactions between the players and goalie and during media availabilities, as he never put the blame on anyone else, nor did his teammates ever throw him under the bus.

In fact, Koskinen’s teammates seemed to genuinely appreciate the goalie, and what he brought to the team. During an interview at the 2022 NHL All-Star Weekend, Oilers captain Connor McDavid called Koskinen the Oilers’ unsung hero. No one can speak better to the value of an athlete than his teammates, and in the case of Koskinen, a comment like McDavid’s spoke volumes.

Rock bottom for Koskinen came during the pandemic-impacted 2020-21 NHL season. Separated from his family for the duration of the campaign, he later revealed that he had felt lonely: “I wasn’t the only guy who was here by myself, and it’s not an excuse, but we’re humans, also …” he said.

Koskinen was joined by his wife, two young children, and beloved dog Chili (who appears on all Koskinen’s goalie masks) this past season.

“It makes my life so much easier,” Koskinen said. “When you go back home, they don’t care if you win or lose. You still have to do your best as a dad, and that’s the most important job I have, being a dad, and last year, most of the (time) I couldn’t do that because I was away, but that’s how life goes sometimes.”

Koskinen’s comments served as a reminder that there is no contract large enough to exempt professional athletes from facing the same mental and emotional challenges as everyone else. In the case of pro athletes, their struggles play out on the public stage and are subject to scrutiny.

Koskinen’s place in Oilers history is much more significant than his reputation would lead one to believe. He’s sixth all-time in franchise history for wins (83), ahead of the likes of Hall-of-Famer Curtis Joseph, Dwayne Roloson, and Mike Smith. He also ranks ninth in games and saves on Edmonton’s all-time NHL leader list.

In the last three regular seasons that the Oilers have rolled with the goaltending tandem of Koskinen and Smith, it’s the former who has had more starts (102 to 94) and won more games (58 to 56), even though the latter has been regarded as Edmonton’s No. 1 netminder more often than not.

Further, Koskinen is one of just three goalies (along with Roloson and Cam Talbot) over the last 20 years to post multiple 25-plus win seasons with the Oilers.

Koskinen Skates off Into the Swiss Sunset

It’s quite possible that the NHL has seen the last of Koskinen, who will turn 34 next month. He could certainly find much worse settings to wind down his career than Lugano, a beautiful lakeside town whose hockey club is rich in tradition.

Related: Mike Smith’s Future With Oilers Comes Down to Question of Fit

Meanwhile, in Edmonton, the Oilers’ goaltending situation is as unstable as ever, with the 40-year-old Smith’s future in question, while the next man up is promising 23-year-old Stuart Skinner, who has just 14 NHL games under his belt.