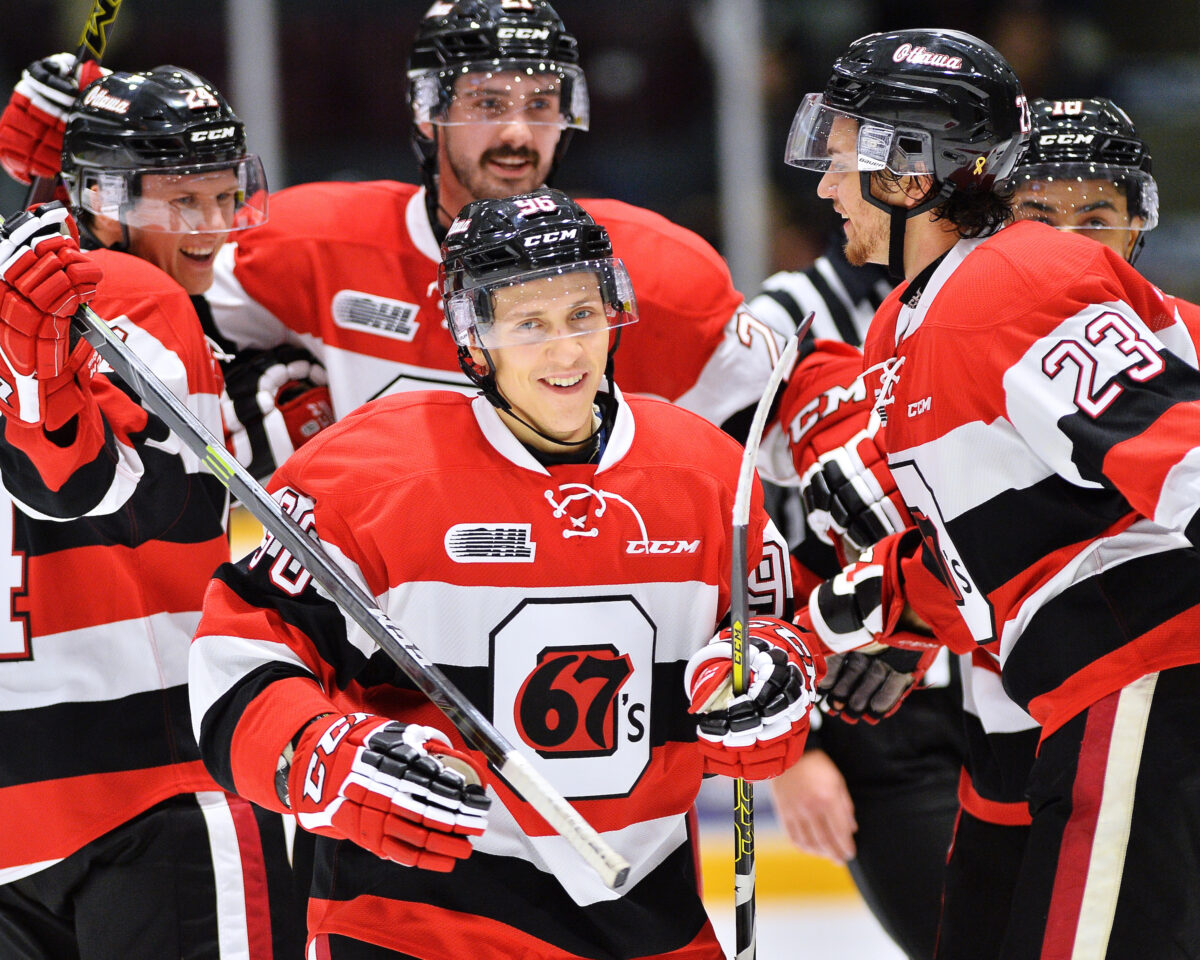 After back-to-back 50-win seasons in the nation’s capital, the Ottawa 67’s have finally been given a chance to pick inside the top 12 with a chance to bolster a depleted roster. Since James Boyd took over the general manager role for the club and Andre Tourigny became the head coach, the 67’s have had plenty of success with their Priority Selection players.

Thrilled With a Higher Selection

The 67’s haven’t found themselves picking very high in the OHL Priority Selection very often, especially recently. In 2019, the team’s first selection was actually 21st overall, making it one of the worst first-round picks possible in terms of the position of the selection.

“I think that’s a pretty good pick,” said James Boyd, General Manager of the Ottawa 67’s. “As we look at the rest of the draft, we will pick 12th, 28th, 32nd, and 40th, so we have four really good picks inside the top 40 so it should net us some exciting players to line up for next year.”

“Overall, we’re happy,” he said. “In a lottery, you never know which way it is going to go especially when you possess other teams’ picks. There’s a lot left to chance, but we’re happy with the way it ended up.”

Unlike in previous Priority Selections, the order will be done in a snake format. That means that the Sudbury Wolves, who won the first-overall selection, will pick last in the second round and return immediately after for the first pick in the third round in theory, but the 67’s own that pick, hence why they are picking 40th overall.

“Over the last few months we have gone over every scenario and every hypothetical, and that’s been the fun part about it,” said Boyd. “As we got closer to the lottery, we became more reserved and let the chips fall where they may. Our focus has been getting a good handle on the players and we feel like our scouts have done an excellent job over the course of the year, we’ve got a solid list. With these picks, I think it’s going to be an exciting draft.”

Of course, with the challenge of COVID-19, many players who will be selected on June 4 and 5 haven’t played a great deal of hockey or missed out on their 2020-21 season entirely. This is going to create some problems when it comes to getting a conclusive list of what players should truly be selected where, but the 67’s come armed with a plan.

“You gather as much information as you can but the key here is the area scouts,” said Boyd. “Our guys that are familiar with their own area, not only with the draftable age group but also the age group before and really all minor hockey players in that area. They have been invaluable this year providing that depth of information of who has grown, who has taken the next step, and who has been doing the training and who hasn’t.”

While we have yet to see the class of 2020 take the ice in the barber pole, Nicholas Moldenhauer, who the 67’s selected 20th overall, looks to be a really good prospect for the team. Alongside Brady Stonehouse, who was picked at 26 with a pick they got from Hamilton and Thomas Sirman at 60, Ottawa looks to have had a very good draft.

The 2019 Priority Selection stands out as one of the best for the 67’s. Each of their first seven selections have either already played a considerable amount in their rookie season or figure to have roles with the team going forward. Jack Matier (21st overall), Jack Beck (31st overall), Thomas Johnston (52nd overall), Teddy Sawyer (62nd overall), and Ranvir Gill-Shane (83rd overall) all played their part in taking the 67’s over 50 wins again in 2019-20. Both Brendan Sirizzotti (32nd overall) and Max Donoso (98th overall) will likely be on the team when we do get back on the ice, hopefully in September for a normal and full season.

The success continues all the way back to 2018 when the 67’s took Cameron Tolnai sixth overall, who should be one of the clubs’ players to watch next season. But once again, it was a deep class for them who took 2021-22 starting goaltender and St. Louis Blues draft choice Will Cranley in the second round. The 67’s hit on both Alec Belanger and Yanic Crete in the third round before taking Matthew Maggio in the fifth round and Anothony Costantini in the sixth round.

It seems that some of the 67’s best Priority Selections have come in the later rounds. In 2015, Kody Clark was picked with the 115th draft choice, then in 2016, the 67’s picked Kevin Bahl 31st, Mitch Hoelscher 56th, and Cedrick Andree 232nd. Jack Quinn was the teams’ second-round choice in 2017 as well.

This is one of those drafts that could see more talented players fall to the later rounds. It’s going to be a question of who are you the most confident in. What player do you think can help you in the long run? There is nothing certain about this draft like we have seen in years past. The best player could even come out of the end of the first round, or they could come out of round seven. It’s going to be a bunch of shots in the dark.

Despite knowing that this draft has just as much chance of producing a bust high as it does a star, you would still rather have a chance to make the first selection. While the 67’s will have to sit on their hands until the middle of the first round, a handful of their rivals will be picking inside the top six.

Three of the four other teams in the 67’s’ division will be picking inside the top six, while Sudbury Wolves, who the 67’s have gone head to head with for some intense battles over the past two seasons, scored the first-overall pick. The Guelph Storm, who beat the 67’s in 2019 to win the J. Ross Robertson Cup, will be picking third, and the Windsor Spitfires fall in the fourth spot.

Only two Eastern Conference teams pick after the 67’s in the first round, excluding the Niagara Ice Dogs, who had their first-round pick stripped from them for violation of the league’s recruitment rules (from IceDogs fined, stripped of draft pick in violation settlement, Sportsnet, March 20th, 2019). They would have picked 15th and will effectively be placed in the corresponding spot in subsequent rounds, but they will not have a pick in the first round this year.

Just a day after the OHL Draft Lottery took place, the league announced that they had finalized the order for both the CHL Import Draft and the U-18 Priority Selection.

The 67’s will pick 15th in the U-18 Priority Selection and 27th in the CHL Import Draft, ninth among OHL teams. Teams were placed in an inverse order for the Import Draft, but another order was created for the U-18 selection. The 27th spot in the CHL Import Draft has previously seen the likes of Samuel Hlavaj, Yegor Postnov, Kristian Reichel, and Axel Jonsson-Fjallby taken and is the 67’s highest pick in the draft since 2018 when they took Marco Rossi 18th overall.

The U-18 Priority selection will take place on June 9th, followed quickly by the CHL Import Draft on June 30th, making Boyd and his staff very busy over the next couple of months.

Currently a journalism student at Algonquin College in Ottawa, I have always had a passion for the OHL and the Ottawa 67’s in particular. I have been attending games since I was young, and being involved with sports has always been a dream of mine. Sports writing fits perfectly into that. You can also find me talking hockey on my podcast, Hockey Prospect Report, or you can find me talking Canadian Football on my other podcast and website the 13th Man Podcast!