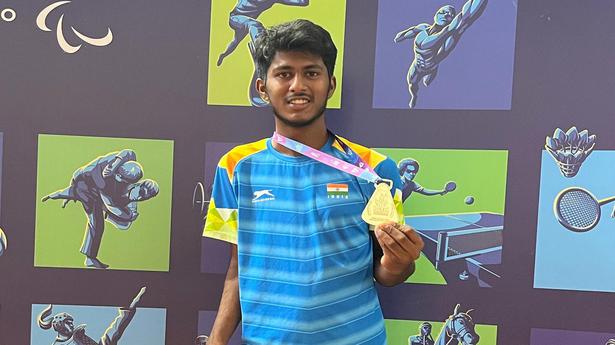 Para badminton player Ruthick Ragupathi, who achieved world no. 1 ranking in mixed doubles with Manasi Joshi earlier this month, is excited about the achievement but doesn’t want to celebrate at the moment.

“My target is to win Paralympics gold in Paris 2024,” says the 21-year-old from Tamil Nadu.

“Since 2019, I had been putting in a lot of effort to become world no. 1. My parents are very happy for me. But there was no celebration. It is fine to be no. 1, but our focus is to give our best in the 2024 Paralympics. Winning gold there would be a big achievement,” Ruthick, who trains at the Pullela Gopichand Academy in Hyderabad, tells Sportstar.

Ruthick is a Side Upper 5 (SU5) shuttler with a right shoulder locomotor disability. He is a southpaw owing to difficulties surrounding his birth. On the day of his birth — January 16, 2001 — at a government hospital in Erode, the surgeon performed a vacuum-assisted delivery that paralysed his right shoulder.

“I was around 4.2kg, so, the delivery became a problem. The doctor put a vacuum device on my right shoulder and pulled me out. Since childhood, my right shoulder has had no strength. I can’t lift my right arm properly,” says Ruthick.

“However, I have never thought that I am disabled. I do everything that a person without any disability does. I rode my father’s bike, wrote school exams, and played badminton on the street outside our house.” Many of those games on the streets were often with his elder sister, Sowmiya.

Ruthick’s dreams have been nurtured by his parents Ragupathi. S and Vedhanayaki. R, and sister. The idea of a career in badminton took flight when he went to pursue a Computer Science degree from Shri Ramakrishna College in Coimbatore.

“Basically, I am a handball player. I won the inter-state handball national silver for Tamil Nadu in 2015, playing with boys who have no disabilities. But as I always had a keen interest in badminton, in September 2018, I approached Paralympian Pramod Bhagat, seeking his advice on how to become a para-shuttler. He asked me to talk to the Tamil Nadu Para-Badminton Association. When I contacted them, they added me to a WhatsApp group. There, coach Mohammad Irfan told me that I had an opportunity to play para badminton. I joined his academy in Erode,” says Ruthick.

Ruthick’s first Badminton World Federation (BWF) tournament was the Dubai Para Badminton International in 2019. He played two more tournaments in Thailand and China that year. He lost in the first round in all three tournaments. These losses played a part in his decision to move to Hyderabad to train under Pullela Gopichand. Incidentally, coach Irfan played a key role in facilitating this move.

Ruthick committed to the move and it started paying off. The Covid-19 pandemic led to tournaments getting cancelled in 2020. Ruthick didn’t go back home, but chose to train in Hyderabad.

“For around one-and-a-half years, I didn’t waste time going back home during the pandemic. I trained six to seven hours a day. That training and dedication paid dividends in 2021 and 2022,” says Ruthick, who doesn’t like to confine himself only to training with para-shuttlers.

“During on-court training, I don’t exclusively train with para-shuttlers. If Manasi is free for a session, we train together. But mostly, I become a sparring partner for Kidambi Srikanth and HS Prannoy, among other players.”

Paired up for the first time in November 2021 on the advice of coaches, Ruthick and Manasi struck gold in Uganda International. Manasi is classified as Standing Lower 3 (SL 3) shuttler by the BWF for her left leg impairment and poor running balance,

“When I joined the academy, we paired up on a few occasions. Our understanding and coordination are very good. And then the academy decided that we would make a good mixed doubles combination,” says Ruthick.

Since then, the pair has played five more tournaments, winning two silvers and as many bronze medals. The one in which they did not win a medal, they made the quarterfinals.

Asked how they prepare for a tournament, he replies, “After every match, we study our games and discuss our mistakes. Then we train to rectify those mistakes to be stronger in tournaments. Training is vital. Also, Manasi is a good motivator both on and off the court.”

Talking about their strengths and weaknesses, Ruthick says, “We are good at attacking. I move quickly and put the opponents under pressure. Manasi plays nearer to the net and I am good at smashing. She will create situations where I can smash and finish the point. We are working on our defence, which is a bit of our weakness. Our target is to win gold in Paris, so, an improved defence is our priority.”