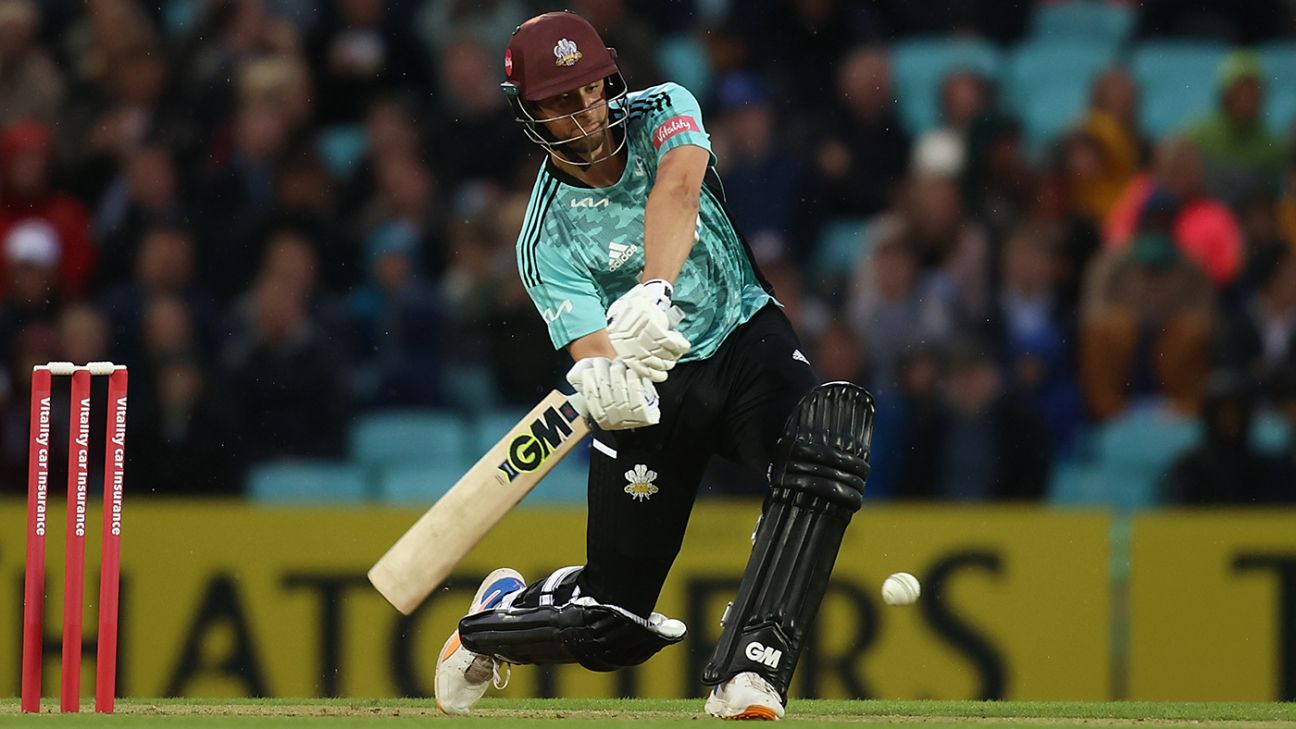 Somerset’s veteran Australian Peter Siddle fell a foot short of a third successive yorker, and the vision of a matchwinning hat-trick in the process, as Surrey preserved their unbeaten record in South Group – and, indeed, in all cricket this season – with the tensest of victories against their closest South Group rivals, Somerset, at Kia Oval.

It was a strangely low-key Oval, about a third full because of the rail strike that had brought much of the country to a halt, but those who made it were treated to a superb finale as Siddle took three wickets in the final over, including quick yorkers to bowl Nico Riefer, second ball, and Gus Atkinson, first up, with his fourth and fifth deliveries.

Siddle’s mass of blond curls, at 37, might carry a hint of a mid-life crisis, but he was suddenly revisiting a time when his powers were at their peak. Another attempted yorker was irresistible with Conor McKerr needing a boundary to take Surrey home, but he fell slightly short and McKerr, playing his first match of the season, squeezed out an excellent extra cover-drive to claim the match.
That Surrey would prosper was by no means certain when they were still 24 short of victory with two overs left. Will Jacks finished unbeaten on 66 from 58 balls. In one of the most disciplined T20 innings of his career, his switch of tempo to launch Jack Brooks over midwicket with 24 needed from two overs was absolutely crucial. But thanks to the rule change which means batters do not regain the strike if they cross on the fall of a wicket, he remained a spectator at the non-striker’s end as the drama played out during the final over.

Surrey, who have won all nine of their completed matches, plus a no-result, are now all but assured of claiming a home quarter-final place. Somerset, still second, remain favourites to qualify for the quarter-finals and to join them in the top two, although they will hope to have secured that before the sides meet again at Taunton in their final group game on July 3.

Surrey’s win was all the more remarkable considering two more injury blows that have reduced their squad to its bare bones. Kieron Pollard, who showed glimpses of form against Hampshire at the weekend, will miss the rest of the Vitality Blast season, having sustained an injury to his left knee earlier in the campaign. He underwent surgery in London on Sunday and an estimated lay-off of four to six weeks leaves it touch-and-go that he will be fit in time for the start of the Caribbean Premier League on August 1. “It’s hugely frustrating,” Pollard said, “because we have been a dominant force and I felt part of something special.”

Jordan Clark also failed to complete his spell because of a side strain, although not until he had taken the key wicket of Rilee Rossouw, the top scorer in the Blast, who lost his off stump when he made lavish room to the leg side.

Somerset, defending a useful 144 for 8 on a slow, used surface, fought back in the field through Lewis Gregory, who removed Sunil Narine, Rory Burns and Laurie Evans as all failed, in various ways, with midwicket hits.

Earlier, Lewis Goldsworthy had taken four fours from the last two overs of Somerset’s innings, ending on 27 not out from 19 balls and adding 41 in just over four overs after a slump to 103 for 8. The combination not just of a used surface but Kia Oval’s huge boundaries appeared to put them out of their comfort zone.

Counties are queuing up to try to prise Tom Banton away from Taunton, and he finally summoned some of his best form of a thin season (an average of 17.20 and SR of 117.80 in the Blast) with 39 from 25 to hold Somerset’s innings together. His collection of reverse whips, sweeps and ramps were reminiscent of his effrontery when he first arrived on the scene, but McKerr defeated another attempted scoop over the keeper when instead he picked out Atkinson at fine leg.

Lammonby tried to counter-attack, immediately top-edging a pull at McKerr for six and then flipping a four to fine leg, but Narine’s miserly and mystery spin was introduced for the tenth over and the Trinidadian went on to bowl his four overs for just 18 runs – with Lammonby run out for 21 by the wicketkeeper, Jamie Smith, who threw down the stumps from close range on the leg side after Gregory sent his partner back.