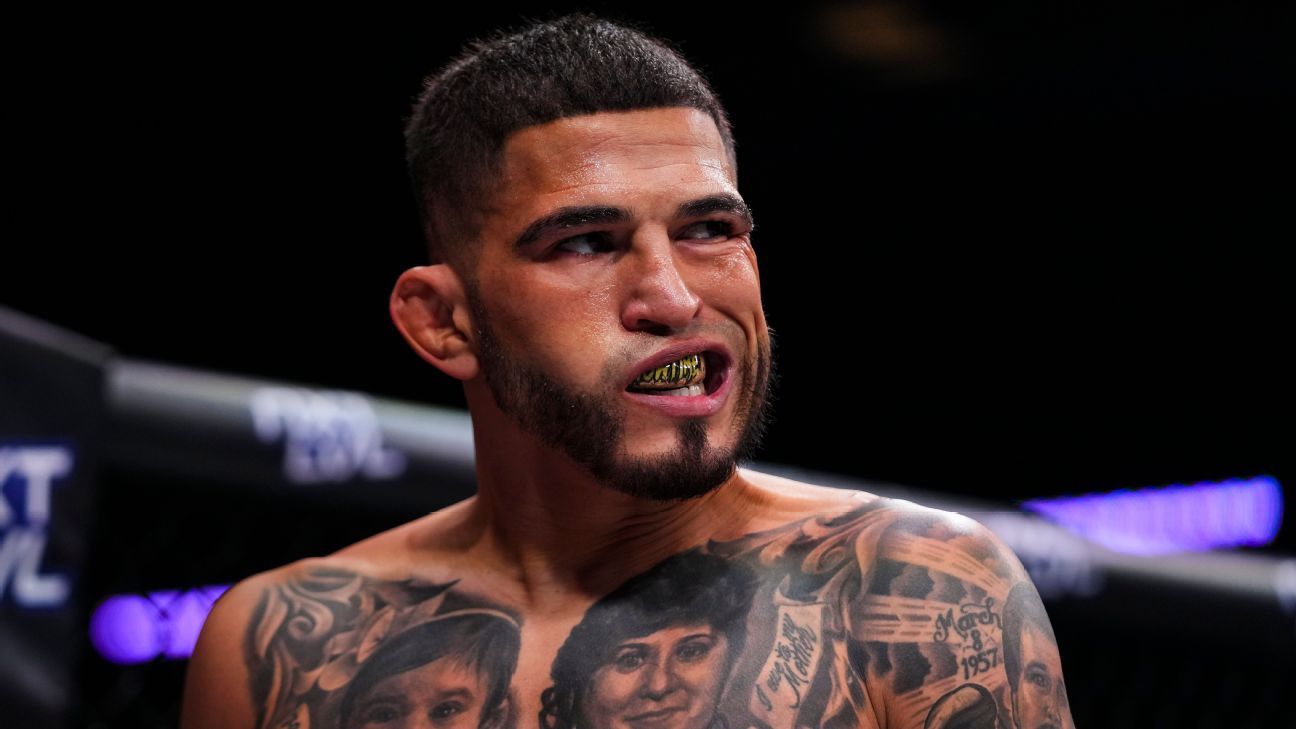 The PFL’s lightweights and light heavyweights finalized their playoff positioning a week ago, and now it’s the turn of the heavyweights and featherweights on Friday at PFL 5 (ESPN and ESPN+, main card at 8 p.m. ET and prelims at 6 p.m.).

The main event at Overtime Elite Arena in Atlanta pits 2021 heavyweight champion Bruno Cappelozza against Matheus Scheffel. Cappelozza is one of three heavyweights (along with Denis Goltsov and Renan Ferreira) who have 6 points and are in good position to earn a playoff spot. Scheffel lost his first fight of the season.

Friday’s co-main event is actually the one remaining regular-season lightweight bout, in which Anthony Pettis faces Stevie Ray. Pettis already has clinched a playoff spot on the strength of his first-round submission in his first bout, while Ray lost his season opener.

There’s still much to sort out. Here’s how I see Friday’s fights playing out, along with playoff scenarios calculated by the PFL.

After being knocked out in his PFL debut in April, Scheffel might be looking at a similar fate on Friday as he takes on the reigning champ. Cappelozza is a nightmare matchup for most, with his aggressive striking and his brutal knockout power. I don’t see this fight going any differently than his last one. Look for Cappelozza to pressure right away and get it done early, securing his spot in the playoffs. Prediction: Cappelozza via KO in the first round.

Pettis returned to the PFL this season in a big way, with a first-round submission win over Myles Price last month. After going 0-2 last season, the former UFC champ was on a mission to get into the win column this season and prove to the world that he is still amongst the elite. Since Pettis was the only fighter in the division to get a finish in the first round, he has already clinched his spot in the playoffs. He is taking on an opponent, Ray, who needs a finish in order to get into the playoffs. I don’t see Pettis taking the fight off and losing his momentum, but I also don’t see him risking injury by being as aggressive as his first fight. Look for Pettis to use his striking to stay away from the power of Ray, and more than likely use his grappling to get a decision win and stay healthy for the playoffs. Prediction: Pettis to win.

The unicorn of the heavyweight division, Ferreira, will be looking to make another impactful statement with a win over a seasoned veteran. Abreu scored a win as an underdog in his last fight, but I don’t see the same happening here. Ferreira is the superior athlete and he’s dangerous everywhere. He should get this done quickly and start preparing himself for the playoffs. Prediction: Ferreira inside the distance.

When it comes to toughness, Bochniak is up there with the best of them. He had a rough outing in his last fight against Bubba Jenkins, and now has another tough task in Wade. I like Wade here. His performance against Lance Palmer showed a ton of growth and maturity in his striking, and when it comes to the PFL format, Wade knows exactly how to do what he has to in order to get into the playoffs. Look for Wade to use his distance striking to keep Bochniak from charging in and turning it into a brawl. Prediction: Wade by decision.

Coming off a first-round knockout, Delija will be looking to do the same here. No matter where the fight goes, he will be too much for Graves, who is making his PFL debut. Expect another quick finish in this one. Prediction: Delija via KO/TKO.

Coming off a dominant victory over Kyle Bochniak, Jenkins will look to have another dominant performance against Ekson, who earned a spot here by competing in the PFL Challenger Series. Jenkins looked as focused as ever against Bochniak and his striking was at its best. Look for him to use his striking to keep Ekson at a distance and, if need be, use his world-class wrestling to get the win. Prediction: Jenkins via decision.

Goltsov has great striking and power, and world class sambo. He also has a very high fighter IQ to keep himself out of any dangerous situations against Greene, a former UFC fighter making his PFL debut. Prediction: Goltsov inside the distance.

Palmer, a two-time season champion, needs a first-round finish or his 2022 playoff dreams will come to an end. Standing in front of him is the dangerous Moraes, who is coming off his best win to date, a dominant decision over Boston Salmon in April. If Moraes can keep the fight standing, he will pull off the upset — and that’s exactly how I see it going. Palmer’s game hasn’t improved much of late, and his wrestling is becoming more predictable every time out. Look for Moraes to stuff Palmer’s takedown attempts and force Palmer to fight him in a kickboxing match, which benefits Moraes in a big way. Prediction: Moraes to win.

This late-replacement bout is between two fighters making their PFL debuts. Adams has the stronger pedigree, with four UFC bouts under his belt. Based on the level of competition he has fought, Adams should be better everywhere. Prediction: Adams to win.

Monday through Friday, host Pablo Torre brings you an inside look at the most interesting stories at ESPN, as told by the top reporters and insiders on the planet. Listen

In his last fight, Flores’s volume and constant pressure with his strikes were the keys to victory. On the other side of the cage, Kudo will be looking to get his first win in the PFL. He was very close to pulling off the upset against Loughnane, until an accidental clash of heads prevented him from being able to continue the fight. I like Kudo, the underdog. I think his power is very unassuming and might cause problems for Flores. Prediction: Kudo to win.

Featherweight: Brendan Loughnane vs. Ago Huskic

Loughane will be looking to secure a playoff spot with a win against late replacement Huskic in the opening bout of the night. Coming off two losses in a row against lesser competition, it is pretty hard to imagine Huskic pulling off the upset against one of the top guys in the division. Loughnane will be better everywhere and should have no issue getting the win here. Prediction: Loughnane to win.