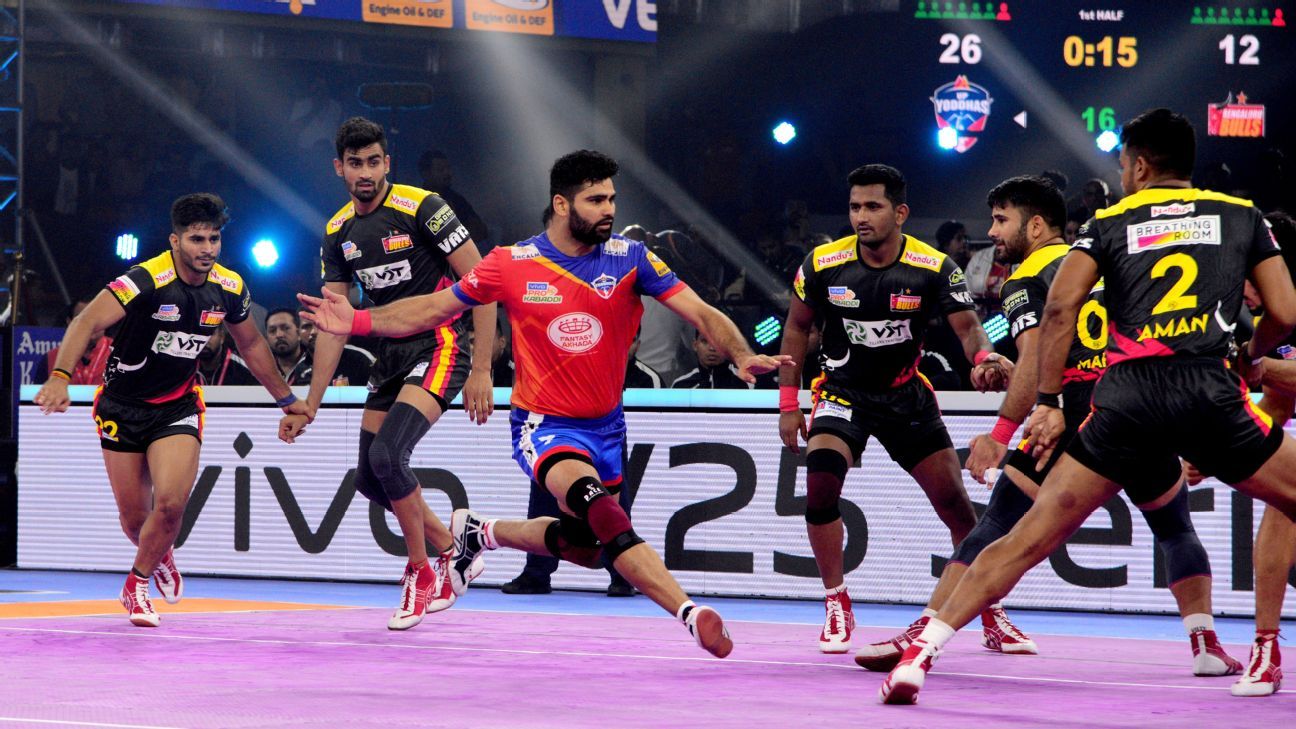 With most of the teams [barring Bengal Warriors and Gujarat Giants] having played 14 games so far, we’re now two-thirds into the Pro Kabaddi League season nine. Bengaluru Bulls are on top of the table now, but only six points separate the top-six teams, who then progress to the playoffs.

Before the season move to the Hyderabad leg, we take a breather to assess each team, look at what makes them tick (or doesn’t), and grade them (A+ being highest, F being lowest).

What has worked: Their raiding department, led by skipper Maninder Singh. The Warriors have scored some big wins [three wins of a 19+ point margin] and have 286 raid points, fifth-best in the season.

What has not worked: The defence has been hot and cold. Warriors have managed only 128 tackle points in 13 games — only four teams have lesser tackle points than them.

Surprise performer: Girish Maruti Ernak. Had a string of excellent games and led the list of most tackle points until a few games ago.

What they need to improve: Defence, for starters. And their support raiders, Deepak Hood and Shrikant Jadhav need to show up when Maninder is off the mat.

What has worked: Their stunning ability to eke out wins despite trailing at half-time. Whatever coach Randhir Sehrawat says during the interval, seems to do the trick.

What has not worked: Vikash Khandola. You’d expect that he’d spearhead the Bulls’ charge but has been average. He was signed as Pawan Sehrawat’s replacement and is nowhere close to filling his shoes.

Best player: Bharat. Has taken over the raiding duties and done stupendously well. Has been the side’s best-performing raider – he’s scored twice as many points as Vikas Khandola, the side’s “lead raider”. That’s saying something.

Surprise performer: Neeraj Narwal. Has been a superb all-rounder and pulled the Bulls out of one too many precarious situations. Isn’t afraid to throw in tackles [17 tackle points] and is an excellent secondary raider [55 raid points].

What they need to improve: Need to close out matches earlier. They seem to take their foot off the pedal and that comes back to haunt them at the death. They’ve won three games by a less than three-point advantage and lost two matches by as many points.

What has worked: Being a very young squad, they have gelled really well.

What has not worked: The lack of a senior player. Dabang Delhi are in a transition phase and have a host of young players, but they often seem clueless when things aren’t going their way.

Best player: Naveen Kumar continues to be Dabang Delhi’s best player by a country mile despite picking up numerous niggles and going through a rough patch. He’s had his share of troubles and also has the added responsibility of captaincy, but is PKL 9’s third-best raider with 149 points.

Surprise performer: Manjeet Sharma in his debut this season. Has stepped up when Naveen hasn’t and is proving to be a great new addition to the team. He’s a very quick raider and has a good understanding of the game.

What they need to improve: When going is good, they’re great. When it’s tough, they’re awful. They need to balance out their performances and find a rhythm. Five wins, and six losses on the trot…that does not scream consistency.

What has worked: The raiding, to an extent. They have the third-best raiding unit in PKL 9 but are held back by a lacklustre defence.

What has not worked: They have the second-worst points difference [-33]. Only Telugu Titans are worse off [-150]. Yeah, that.

Best player: Rakesh Sungroya has evolved into a more complete raider this season and has more often than not single-handedly carried the side past the finish line.

Surprise performer(s): The two all-rounders Arkam Shaikh and Shankar Gadai have shown promise, but are yet to make a real impact.

What has worked: Everything. But in patches.

What has not worked: Their foreign signings. Amirhossein Bastami, the third-most expensive overseas player in PKL 9, came in with plenty of hype as he was part of the Iranian side that won the 2019 World Junior Kabaddi Championship. He has just not clicked at the Steelers, making error after error on the right corner. The other Iranian, Mohammad Mahalli, has only played two games and attempted three tackles.

Best player: Manjeet. Came in on the back of an Rs 80 lakh price tag and has delivered big time.

Surprise performer: Meetu Sharma. He gave glimpses last season of how good he could be and has blossomed this time around. He’s the tallest raider, but his explosive power and evading abilities have made him a menace to defenders.

What they need to improve: Consistency. For a team that good, they ought to thread together better results. They’ve managed to win two successive games only ONCE this season – in their first two games of PKL 9.

What has worked: The balanced approach, not too much emphasis on either department. They’re home to PKL 9’s #1 raider and #1 defender. That pretty much tells the tale.

What has not worked: The secondary raiders haven’t quite worked for the former champions. All’s well until Arjun Deshwal is in form, but on the one odd day that he isn’t, they’re in a spot of bother. Arjun has 161 raid points, while their next-best raider Rahul Chaudhari has 1/4th of that – 49. That’s a sign of concern.

Best player: Arjun Deshwal. Has simply continued where he left off last season and leads the chart for most raiding points. Had a bit of a slump in between, but bounced back in no time.

Surprise performer: Ankush. The young man has been a revelation on the left corner this season. He doesn’t have Fazel Atrachali’s muscles or Jaideep’s body, but when he’s onto you, you know you’re in trouble. He’s currently the #1 defender in the league.

What they need to improve: There isn’t a whole lot for them to improve, except the fact that the support raiders need to start performing regularly.

What has worked: The ability to deliver under pressure, in most situations. The three-time champions have the most points from Do-or-die raids – 72. And one man, Sachin Tanwar, has won 48 of those.

What has not worked: Patna are known for their defence and have a good unit, but they have not delivered to their potential. Mohammadreza Shadlou, last season’s best defender, is a livewire on the mat but has not been effective. Sunil and Neeraj Kumar are good, but the defence is too porous.

Best player: Sachin Tanwar. The lanky raider is faster and stronger this season and has defenders scampering to avoid getting tagged by his running hand touches. Has played a crucial role in the Pirates’ playoff chances this season.

Surprise performer: Nobody, really. They retained the core of their team and the few fresh faces haven’t made a statement.

What they need to improve: It’s a very individual-driven team. Either Sachin or one of the defenders play the role of the anchor while the others fail to contribute. That’s something coach Ravi Shetty will have to address going forward.

What has worked: Puneri Paltan’s youth-first approach has been a treat to watch. The likes of Aslam Inamdar [who was made captain in Fazel’s absence] and Mohit Goyat have elevated their game from last season, while someone like Akash Shinde has been a breakthrough star.

What has not worked: The fact that the coach insists on starting with Mohammad Nabibaksh in every game. The Iranian is a match-winner for sure, but has not been at his best. He’s got just 13 points to show from 11 matches – a measly figure for an all-rounder.

Best player: Fazel. Simply because of how many things he takes care of during a game. He ensures that he’s fit, rotates his raiders, whispers a word of advice into the raiders’ ears before every raid, cheers his defence when they grab a tackle point and motivates them when things aren’t all hunky-dory. He’s the full package and he’s done his job to perfection, especially considering the young, inexperienced squad he has.

Surprise performer: Akash Shinde. He stole the limelight when Aslam was injured and has wowed fans and pundits alike and bossed the role of a lead raider. He’s got 70 raid points with three Super 10s and is yet another product of Paltan’s school of raiding.

What they need to improve: If we had to nitpick, then Aslam and Mohit could turn it up a notch. While they have got the job done so far, they can certainly do better.

What has worked: Whatever Ashan Kumar has come about and said, it has worked. He took over the team at a time when they were in the pits and has worked about a miraculous comeback. Tamil Thalaivas have a realistic shot at the playoffs, when was the last time you heard that?

What has not worked: Pawan Kumar Sehrawat’s injury, within 10 minutes of the season, has severely hurt the team. They didn’t just lose their best raider, but they lost their captain and a solid defender. However, full marks to this team to put that behind them and continuing to perform.

Best player: Narender Hoshiyar has been their find of the season. The PKL debutant has taken over the raiding reins in Pawan’s absence and done full justice to his role. The best part is he has zero nerves and isn’t shy from throwing a tackle every now and then.

Surprise performer: Going to stick with Narender here. To play such a pivotal role in your debut campaign and take up such responsibility is genuinely remarkable. And he’s done it game after game.

What has worked: Nothing.

What has not worked: Everything.

Best player: Siddharth Desai. He is riding on some superb form with five successive Super 10s, but they have gone in vain. as the defence has been leaky as ever and he has no support raider.

Surprise performer: None. On the contrary, it’s surprising that no one has performed barring Siddharth. So much for us calling them the best squad in the league this season.

What they need to improve: Everything.

What has worked: The squad’s balance has been key. Surender Gill and Pardeep Narwal in raiding and Ashu Singh and Sumit in defence have held fort.

What has not worked: Nitin Tomar’s injuries and Abozar Mighani’s no-show. The two of them are among the best players in PKL, but haven’t been in the best of shape recently and haven’t gotten much gametime.

Best player: Pardeep Narwal, duh. He’s been in some form of late [22 points against Dabang Delhi on Wednesday!] and is playing his best kabaddi in a UP Yoddhas jersey.

Surprise performer: Rohit Tomar. He’s been among the surprise packages of the season with his trait of racking up points in crucial situations. If there’s an award for the most effective secondary raider in PKL 9, Rohit will take top honours.

What they need to improve: They need to hold on to momentum. The side had a topsy-turvy phase and have now settled into a good rhythm [unbeaten in five games], which they must extend.

No sweets, milk or ghee: Pardeep Narwal’s route to rediscover his mojo

What has worked: The defence has clicked when it matters the most and propelled the side into the top-six They have the most tackle points thus far – 163.

What has not worked: The lack of an established raiding unit has proved tough for U Mumba. Guman Singh has shouldered a bulk of the responsibility, but this is only his second proper season and there’s only so much he can do.

Best player: Rinku in the right corner. He has 38 tackle points with an impressive success rate of 61%. His best contributions have come in Super Tackle situations, he’s got four of them.

Surprise performer: Jai Bhagwan. Wears his heart on his sleeve and is full of josh. He’s playing his debut season and has 53 points in 12 matches, which include a handful of tackle points.

What they need to improve: The raiding has to get better.