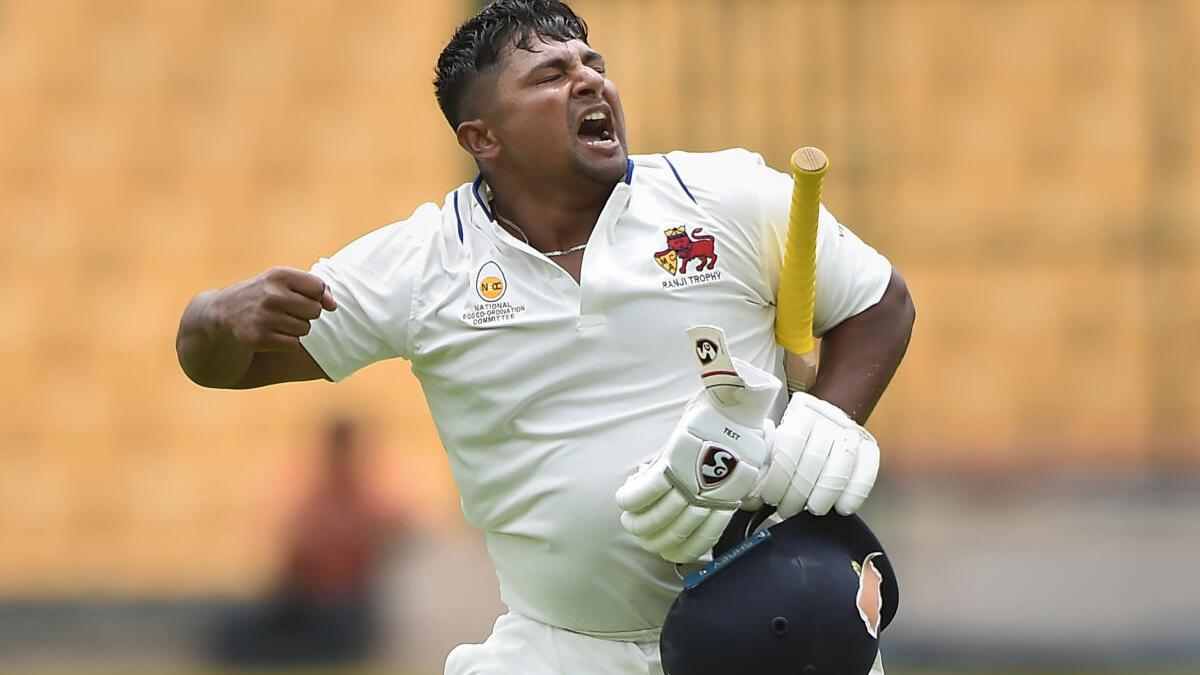 Mumbai found strength and spine through Sarfaraz Khan. The batter’s 134 (243b, 13×4, 2×6) blended chutzpah and a steely resolve to help the former champion stay marginally ahead of Madhya Pradesh in the Ranji Trophy final in progress at the M. Chinnaswamy Stadium here on Thursday. At close on the second day, Madhya Pradesh scored 123 for one in its first innings while replying to Mumbai’s 374.

The Madhya Pradesh openers Yash Dubey and Himanshu Mantri added 47, with the latter taking a shine to left-arm spinner Shams Mulani, hoisting two sixes. But after tea, seamer Tushar Deshpande trapped the aggressor. Mumbai got the breakthrough but for the remainder of the last session, Dubey and Shubham Sharma batted with ease in their unfinished 76-run partnership.

Earlier, resuming at the overnight 248 for five, Mumbai lost Mulani to the day’s second delivery as Gaurav Yadav darted one back and ruffled the pads. From the other end, Sarfaraz watched his departing colleague and had a quiet word with next man Tanush Kotian. Importantly for Mumbai, Sarfaraz shepherded the tail and strung a series of critical partnerships.

As Kotian settled, Sarfaraz lofted Yadav and swept Kumar Kartikeya across the ropes. And once the 50 was secured, he gestured to his applauding mates in the dressing room, hinting that he would stay at the pitch and guide his team. He remained true to his word and with Kotian, added 40 for the seventh wicket before Yadav castled the lower-order batter with a superb delivery that moved just a shade to clip the stumps.

Dhawal Kulkarni trudged in and dropped anchor, indulging in some exaggerated leaves outside the off-stump, Sarfaraz employed a short-arm pull of Yadav and as he crossed over crashed into the bowler. In severe pain as the helmet grille struck a side of his face, Sarfaraz rested a bit before getting up. He steered a four off Yadav and normal service was restored.

Dhawal perished after a 36-ball solitary run but importantly was part of a 26-run alliance with Sarfaraz. The latter scooped a four off Anubhav Agarwal and soon reached his fourth ton of the season. The ecstatic centurion presented an amalgam of emotions as he acknowledged the cheers besides doing a war-cry while gazing at the dressing room.

Mumbai had an appetising lunch score of 351 for eight and on resumption, Deshpande fell but by then the ninth-wicket partnership had yielded 39. Sarfaraz was the last man dismissed while he attempted quick runs, a towering six being part of the package. Thanks to him, Mumbai might believe that it has just about enough to test challenger Madhya Pradesh.