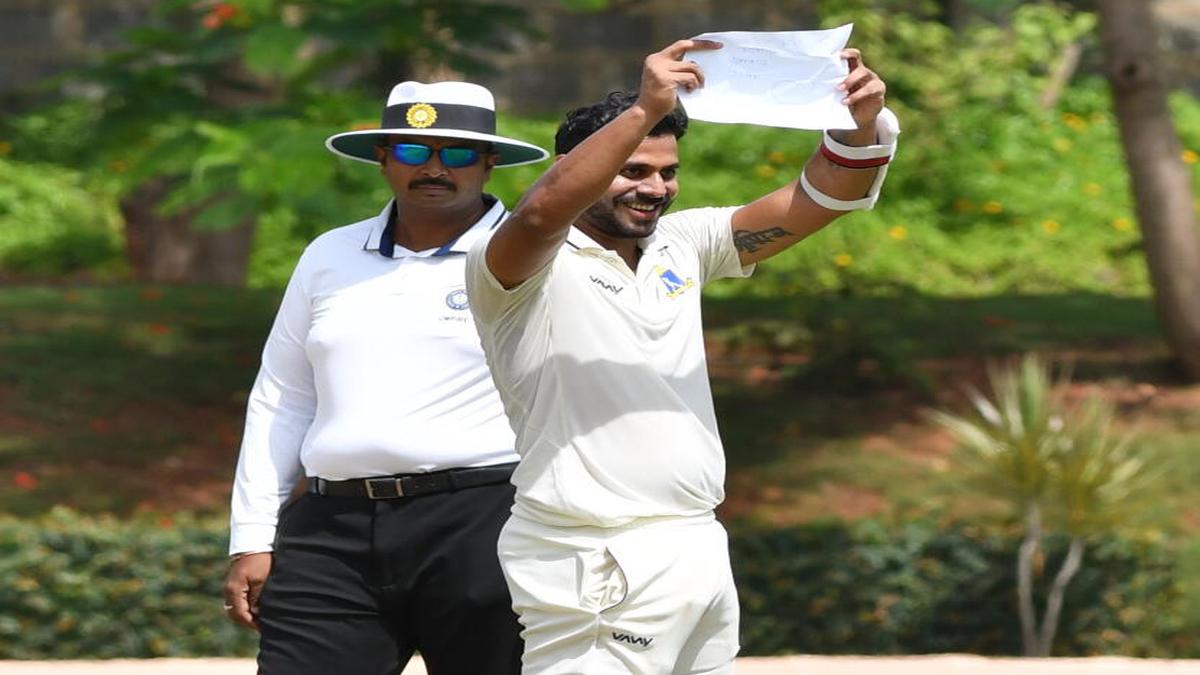 MP was 163/2 at stumps, ahead by 231, riding on Rajat Patidar’s (63, 109b, 10×4) flawless unbeaten fifty. After bowling Bengal out for 273, the MP openers had survived a few plays and misses and a close run-out chance. However, it was the umpiring that was in focus after lunch. Bengal struck in the second over after the break when Mukesh angled a length ball into Yash Dubey, who was late on the flick and hit on the pads. It was sliding down leg, but umpire Vineet Kulkarni thought otherwise, gifting Mukesh his 100th first-class wicket.

READ: As it happened

A few overs later, a caught-behind appeal off Ahmed’s bowling was turned down by umpire Ravikant Reddy. Ahmed beat Shubham Sharma in the air and off the pitch to trigger a vociferous and united appeal from the Bengal fielders. Manoj Tiwary even suggested that “yeh to out tha (this was out)” but replays confirmed that there was daylight between bat and ball.

Ahmed, who bowled 13 overs unchanged for 18 runs from the Main Gate end, had to endure more disappointment when Shubham was given a reprieve on 9 after Abishek Porel spilled a straightforward chance behind the stumps. But Porel redeemed himself when he effected a quick stumping to dismiss first-innings centurion Himanshu Mantri.

Since then, Patidar walked in and played a flurry of fluent drives. He had added 40 for the third wicket with Shubham when the latter retired hurt after being struck on the hand by Akash Deep just before tea.

Key here was Bengal’s inability to introduce close fielders given the brisk pace of Patidar’s batting and the quickly mounting lead. Captain Aditya Shrivastava and Patidar exploited the spread-out field to milk the ones and twos. Bengal’s answer to every problem seemed to be throwing the ball to Ahmed while switching his ends. But Patidar and Shrivastava kept him at bay during their unbeaten 73-run association, using their feet to either get to the pitch of the ball or use the depth of the crease and score off the back-foot. The Bengal quicks bowled well in patches but were far from threatening.

Earlier, a despondent Tiwary could barely drag himself off the field after getting out. Just the over prior, he had completed his 29th first-class hundred, second in a row, and celebrated endearingly. He dropped his bat and produced a piece of paper from his pocket, which contained a note acknowledging the support of his wife Sushmita, son Vivaan and pet dog Maximus.

Now Tiwary had top-edged a sweep off offspinner Saransh Jain (3 for 63) to be caught at first slip. He had top-edged the previous ball too, but that was slightly wider of off stump and had landed in the vacant short fine region. This time, Jain went a tad full, closer to the stumps, and the change in line and length ended Tiwary’s 309-minute vigil in the middle.

Shortly after, Ahmed reached his 100 off 193 balls, but not without drama. On 99, he played the ball to point, took off for a single, and was halfway down when Pradipta Pramanik sent him back. Luckily, there was a fumble from the fielder, which allowed him to rush back in time. Off the next ball, Ahmed drove down the ground for a couple as the entire Bengal dressing room stood up and applauded his maiden first-class hundred.

Ahmed mostly played straight, covering whatever spin the MP spinners imparted on the ball by showing the full bat face. He drove every full ball but refrained from chasing the wide line, so it must’ve been disappointing when he finally gave in to the temptation and went after a full and wide ball, only to nick it to the keeper.

Once both fell, the rest followed suit. There could be more toil ahead for Bengal on day four.