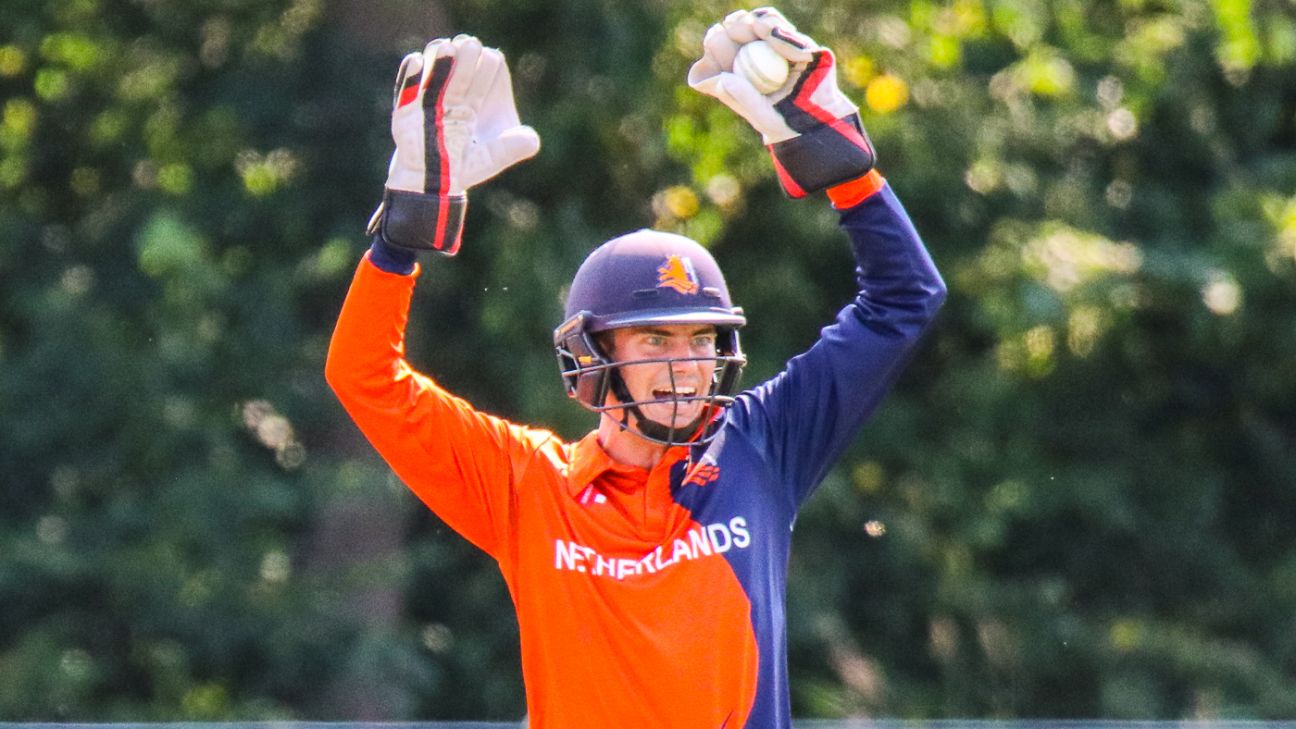 Fifty-over cricket… remind me what that is again? Ah yes, that’s right, it’s all about Jonny Bairstow getting into Beast Mode and belting six after six after six into the short square boundary, to hunt down a run-a-ball target without breaking sweat. Or is that what Test cricket has become in the last few days? I can’t keep up anymore.
And so, with apologies to what promises to be a historic occasion in Amstelveen on Friday, the resumption this week of England’s World Cup Super League campaign comes accompanied by an all-pervading sense of decay to white-ball cricket’s “traditional” form of the game (50-plus years of ODIs does qualify it for that title, right?). The Super League itself is already on borrowed time (not that the Netherlands’ challenge in this cycle has yet caught fire), and the format’s dwindling relevance is perhaps best epitomised by the prospect of Lancashire’s left-armer Luke Wood readying himself for a 50-over international debut without having bowled in a 50-over match for three years.
And yet, here we are. Back on the rather battered bandwagon, sandwiched between two Test matches, with a new coach Matthew Mott overseeing the earliest stirrings of England’s World Cup defence, alongside an old captain, Eoin Morgan, who isn’t so much raging against the dying of the light as declaring “not really…” and changing the subject whenever the awkward issue of his shelf-life comes up for debate. There’s a changing of the guard afoot at some stage in the next 12 months. But whether it comes before or after England’s title defence in India remains a matter that only the skipper himself seems capable of confirming.
And yet, all this circumstantial angst no doubt does the contest in store a disservice. For 18 months, England were guilty of endless forward planning in their Test team until Brendon McCullum’s arrival signalled a new intent to seize the day with the alacrity of the reborn, and perhaps the same is true for this week’s events. After all, England and the Netherlands have never before met in an ODI outside of a World Cup – and by the end of this trip, they will have doubled their official encounters over the years from three to six (although those with long memories will doubtless remember some of the unofficial encounters too, including this memorable set-back in an already dismal English summer in 1989).
As Ryan ten Doeschate, Netherlands’ greatest player, told ESPNcricinfo, he too was guilty of too much forward-planning in his own fine career, and failed to fully savour the journey because of too much time fretting over the destination. You can be sure, if any of this week’s three matches ends going the way of either this or this encounter, a home crowd at Amstelveen will be all too happy to replicate the joyous scenes that England’s own victors felt at Trent Bridge earlier this week.

In all honesty, the likelihood of that happening is slim. Not only does the 50-over format rather stretch the possibilities when it comes to outgunned teams sustaining a lasting challenge, the events of the week just gone have doubtless sent a jolt of electricity through the wider England set-up.

Moeen Ali has already signalled his willingness to come out of Test retirement after seeing what fun his brethren had up at Trent Bridge, while Jos Buttler – who went from white as a Test sheet to pretty in Rajasthan pink in less time than the Barmy Army usually takes to get sunburnt – is another man who might just find the recall to arms irresistible. There’s no time like the present to plant that front foot and start remaking an impression.
The Super League set-up does at least mean that the Netherlands come into this contest with matches under their belts: already this year, they’ve played away series against Afghanistan and New Zealand, while earlier this month, they ran West Indies close in two of their three fixtures at the same venue – most particularly in the third game, where at 239 for 3 chasing 309, the chase was truly on. A 20-run loss ensued, but with half-centuries for Vikramjit Singh and Max O’Dowd, and forceful contributions all through the top order, there’s reason to believe they can still put up a fight this week, if not end a run of nine defeats in a row.

The performances of two 19-year-olds in Vikramjit Singh, the swashbuckling left-handed opener, and Aryan Dutt, whose offspin accounted for Nicholas Pooran in each of his three innings in Amstelveen, highlighted the talent coming through the Dutch system. But Bas de Leede, the allrounder who is the latest member of his family to represent the Netherlands, is the team’s perennial coming man: he has been around for so long that it is easy to forget he is only 22. He has only shown glimpses at full international level but a T20 innings of 79 not out off 30 balls against a Northants XI last month suggests he should enjoy the flat pitches anticipated in this series.
Morgan is an obvious talking point, as he seeks in the same breath to prove both his fitness and his form. But Jason Roy comes into this series with a different set of question marks hanging over his game. In February, he pulled out of his IPL contract with Gujarat Titans citing personal reasons, and in March, he was fined £2500 by the Cricket Discipline Commission for an undisclosed misdemeanour that may or may not have been connected to the “indefinite break” that he took from the game in the early weeks of the season. He’s been back in action of late for Surrey in the Vitality Blast, and at Lord’s last week he hit his full stride for the first time this season with a rampant innings of 81 from 45 balls. He’ll doubtless be eager to continue letting his bat do the talking.

Tom Cooper is quite the blast from the past in the Netherlands set-up. He is set to play his first ODI since 2013, and his first international of any variety since the 2016 T20 World Cup, having featured for Brisbane Heat (without any great success) during the recent Big Bash. Shane Snater is available too, with Essex having released him from Vitality Blast duty, but Fred Klaassen will likely have to wait until the third ODI, given Kent’s brace of fixtures against Hampshire and Middlesex this week.

Sam Curran is likely to play primarily as a batter as he continues his return from a stress fracture of the back. His bowling returns have been impressive in the Blast for Surrey this season, but Morgan hinted that his levels would be built up through the series. Phil Salt is expected to get the chance to partner Roy at the top of the order, with Dawid Malan expected to bat at No. 3 as a possible under-study to Joe Root. Brydon Carse, who made his debut in England’s emergency squad against Pakistan last year, may get first dibs alongside Reece Topley in the bowling attack, as the only right-arm quick in a left-arm-dominant squad.

Amstelveen promises short straight boundaries and slightly longer hits square, which may particularly lend itself to Roy’s brand of straight-lined bludgeoning. Morgan described the pitch and outfield as “rock-hard”, which suggests runs, and plenty of them. The weather is set to be scorching.

“It might be a scar for England but for us, it’s just joyful memories. We’re playing a different format here and England at that time were in a different mindset in white-ball cricket to where they are now. A third win would be fantastic.”
Pieter Seelaar has fond memories of upsetting England in the 2009 and 2014 T20 World Cups

“We sat back in our hotel watching it on a phone, ball-by-ball, watching guys that we’ve played with over the years produce shots and apply a method that we’ve used in the most difficult of circumstances. Test match cricket is incredibly tough so to peel back those challenges and play in the manner that they did is a huge credit to the dressing rooms for creating an environment where people feel comfortable enough to do that.”
Eoin Morgan admits his squad have been motivated by the manner of their red-ball counterparts have played against New Zealand