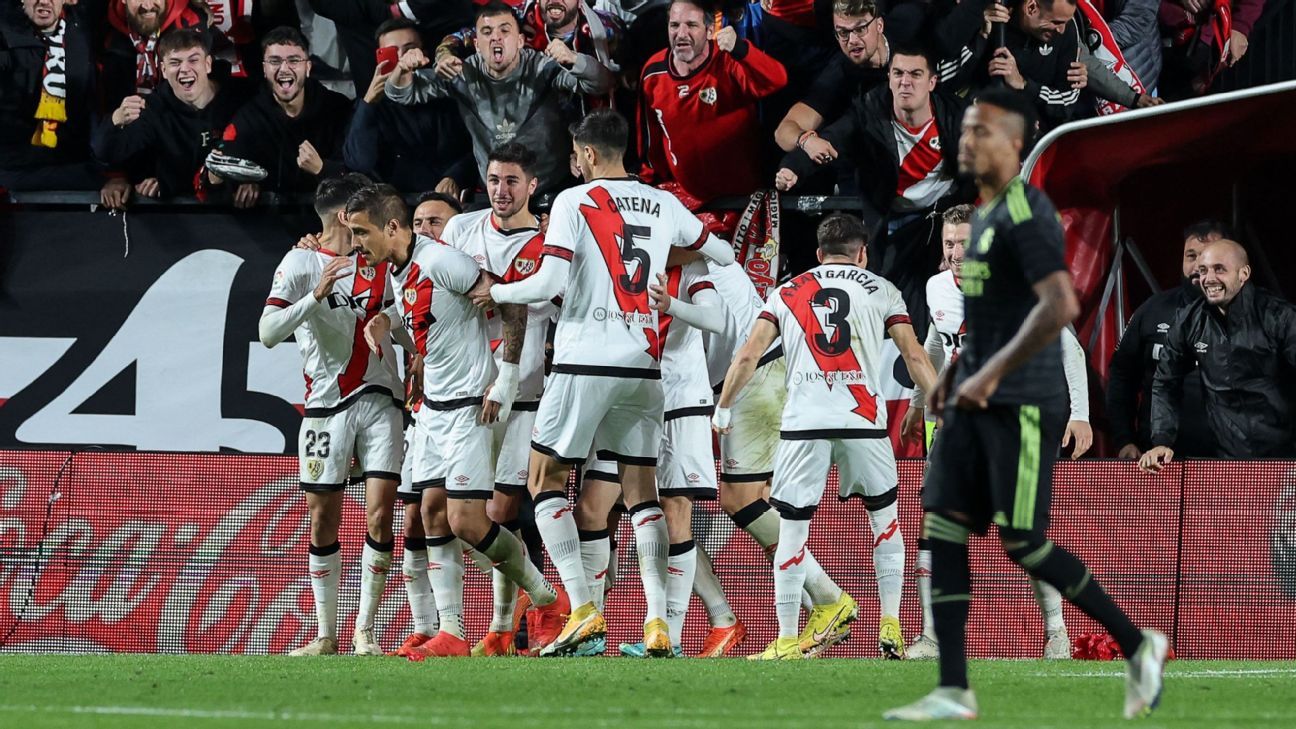 Rayo Vallecano pulled off a shocking 3-2 upset of Real Madrid in LaLiga on Monday night, handing the reigning champions their first loss of the season in Spain’s top flight.

Karim Benzema was rested as Real Madrid looked to move back atop LaLiga in a feisty game that saw the teams trade goals in the first half and Oscar Trejo net a second-half penalty to give Rayo a massive win at the Estadio de Vallecas in Madrid.

The hosts opened the scoring in the fifth minute on a lovely volley from Santiago Comesana, who redirected Fran Garcia’s cross with a first-time shot that Madrid keeper Thibaut Courtois had no chance to get a glove on.

Courtois was called into action in the 30th minute to keep Madrid’s deficit at a single goal as Isi Palazon’s swerving shot from distance was headed for the back of the net.

The first half finished with a flurry. Luka Modric scored from the penalty spot for Madrid after Marco Asensio was fouled in the area, then Eder Militao headed the visitors in front from a corner kick.

But Alvaro Garcia drew Rayo level just before the break, smashing a volley past Courtois following a bizarre sequence in the Madrid penalty area that saw the ball fall right to the home forward’s feet at the back post to make it 2-2 at half-time.

A VAR review led to the go-ahead goal for Andoni Iraola’s team, with video showing Dani Carvajal had touched on the edge of the area allowing Trejo to put Rayo in front from the spot in the 67th minute at the second time of asking. Courtois had saved Trejo’s first effort, but Carvajal was called for encroachment during the kick and the Spaniard did not miss with his second attempt.

The referee handed out a total of seven yellow cards during the match with one going to Vinicius Junior, who dished out and was on the receiving end of some rough play over the course of the match.

Carlo Ancelotti’s side pushed to get back into the game, but Rayo stood tall to see out the result and leave Madrid on 32 points from 13 games, two behind leaders Barcelona. The hosts finished the day in eighth place with 21 points so far this season.