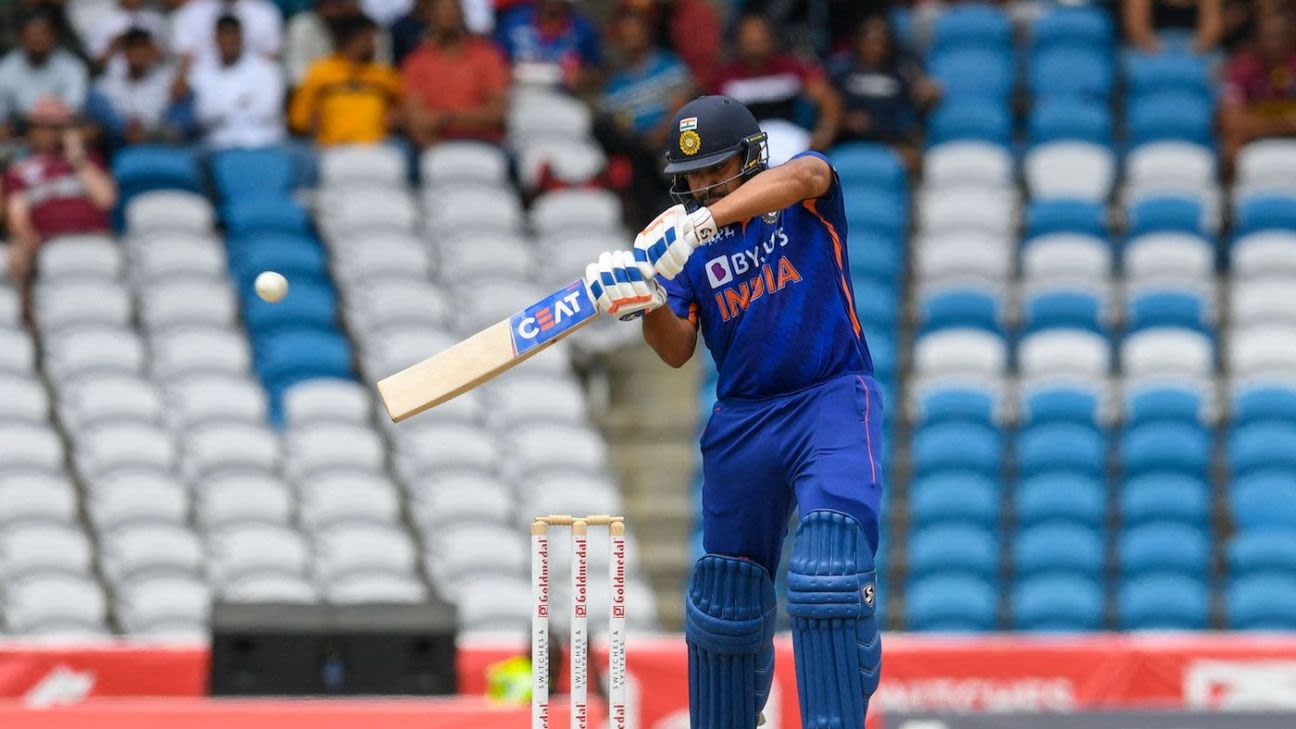 India are ready to embrace the “odd failure” in their quest to ramp up the run rate across phases of a match, in the lead-up to the T20 World Cup, their captain Rohit Sharma has said after winning the first T20I against West Indies.

“We want to try certain things when we bat in the first six overs, when we bat in the middle overs, and how we finish off the games,” Rohit said after India’s 68-run victory. “So, there are three facets of the game we want to try to improve, and how we can get the best out of each player. We’ve given specific roles to specific players to come and do the job for the team. Today, we did it. There’s no guarantee that it will happen every game, but we got to try and back those ideas of going out there and trying to execute certain skills with the bat.

“And while doing that we will have some odd failures here and there, but we are pretty much okay with that. We want to try to do certain things when we bat, and I think we’re able to achieve certain things. So, all in all, I thought it was a great effort and we want to continue to do that.”

Rohit, though, cautioned his batters against going too hard on pitches that aren’t conducive to such an approach and urged them to be smarter with their decisions.

“But, again, we need to understand what sort of pitch we play on,” he said. “Certain pitches will not allow you to do that, so you got to take a backward step and see how you can play in those overs because the guys have a lot of skill and they’ve played on all sorts of pitches back home. So, they just need to back those skillsets with the bat in the middle overs.”

That India eventually scored 190 for 6 after being 138 for 6 in 16 overs was down to Karthik’s blows in the last two overs. Such a total, Rohit said, seemed beyond India’s reach at the halfway mark of their innings.

“The nature of the pitch… we knew it was going to be slightly tough,” Rohit said. “The shot-making wasn’t that easy at the start and at the same time, we do understand that guys who are set need to carry on as long as possible because there was some grip for the spinners. The odd variation wasn’t easy to pick.

“But the way we finished off the first innings getting to 190 was a great effort because I really thought this wasn’t a pitch where you can get 170-180 when we were batting in the first half of the game and when we finished the first ten overs.”

‘Difficult to read pitches in the Caribbean’ – Pooran
West Indies captain Nicholas Pooran admitted that his side’s indiscipline played a part in India posting a total that was above par.

Kyle Mayers dropped Suryakumar Yadav on 10 at short cover, Alzarri Joseph kept offering pace and bowling short to Rohit, Jason Holder missed his yorkers at the death, and then their batting unravelled in the chase. To add to West Indies’ woes, they could have just four fielders outside the 30-yard circle during the end of India’s innings due to an in-match penalty for slow over rate.

“I did feel like they got 20 runs more,” Pooran said after the game. “And that was basically with our indiscipline. Obviously, with the over rate there in our last two overs and an extra guy in the circle, it was a big challenge for our bowlers. But we need to be a bit more disciplined.”

West Indies picked just one spinner for the game – Akeal Hosein, who took 1 for 14 from his fours overs – while India went with three – Ravi Bishnoi, R Ashwin and Ravindra Jadeja, who shared five wickets among them. Did West Indies misread the conditions in what was the first international match at the Brian Lara Stadium?

“In hindsight, it is difficult to read the pitches in the Caribbean, to be honest,” Pooran said. ” We can go back and say maybe we missed a trick, but in hindsight, anything could happen. The last two overs went for 40-odd [36] runs. Maybe 160 would’ve played differently for us, but we will definitely reflect on the decision that we made and will definitely try to get better in the days to come.”

The teams travel to Basseterre in St. Kitts for the second and third T20 internationals on August 1 and 2.

Deivarayan Muthu is a sub-editor at ESPNcricinfo