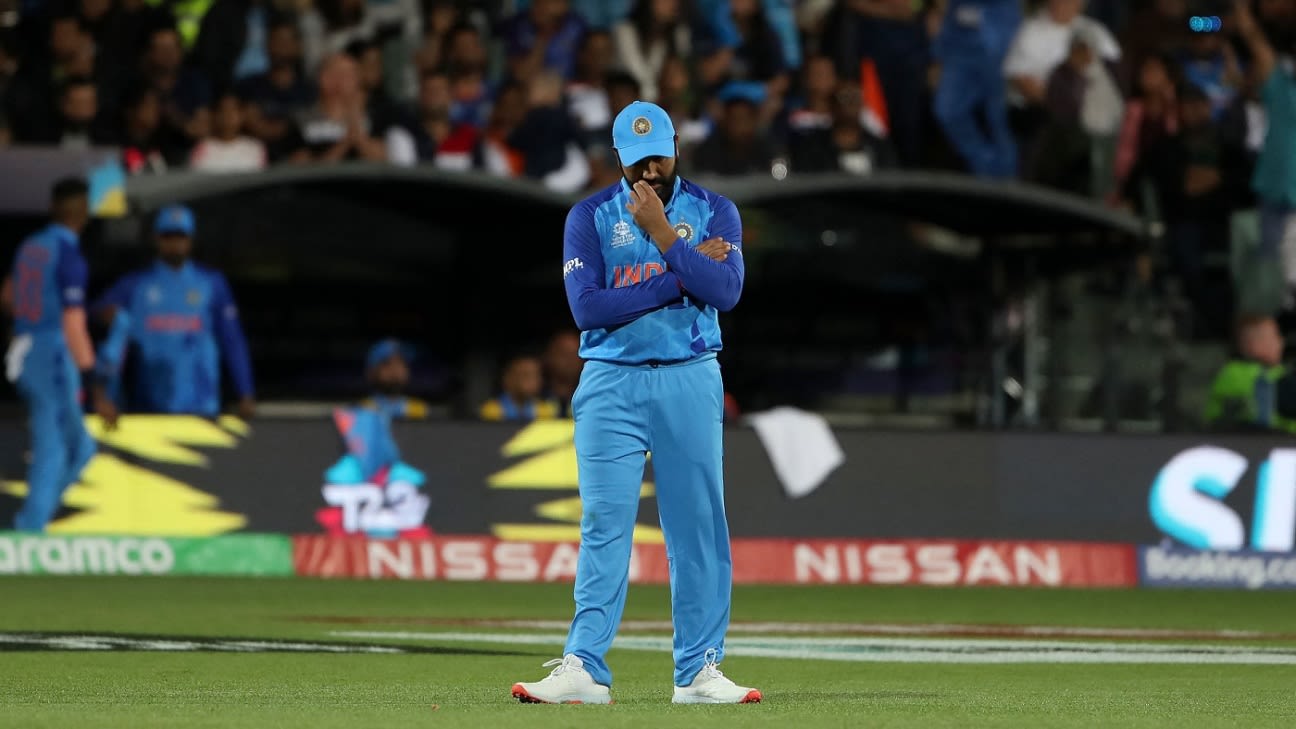 India just didn’t turn up with the ball. This was Rohit Sharma‘s immediate diagnosis after their ten-wicket defeat in the T20 World Cup semi-final against England in Adelaide. Chasing 169, England romped home with 24 balls left to play, as Alex Hales and Jos Buttler dominated India’s bowlers from start to finish.

“I thought we still batted pretty well at the back end to get to that score, but we weren’t good enough with the ball,” Rohit said at the post-match presentation. “It was definitely not a wicket where a team could come and chase down [that target] in 16-17 overs. But yeah, these things happen. Like I said, with the ball we just didn’t turn up today.”

Buttler set the tone for England in the first three balls, threading Bhuvneshwar for a pair of fours past the diving point fielder. It was the start of a bowling effort where India struggled to prevent England from accessing the short square boundaries at Adelaide Oval.

This could have meant either that India’s top-order batters failed to maximise the short square boundaries, or that India’s bowlers didn’t bowl the right lines and lengths, or both. Rohit suggested that the bowlers offered England too much width.

“I thought when Bhuvi bowled his first over, it swung a little but not from the right areas,” Rohit said, when asked whether there was less swing than normal for Bhuvneshwar and Arshdeep Singh with the new ball. “We wanted to keep it tight, not give room, we looked at Adelaide pretty well, we know where the runs are scored. Square of the wicket is what we were quite aware of, and that’s where all the runs went today. Keeping it tight is something we spoke of but from there if the batsman plays a good shot we’ll take it. But that is something that didn’t happen today and that is a little disappointing.”

This defeat meant India had lost the World Cup semi-final each of the last four times they had reached that stage – the 2015 and 2019 ODI World Cups and the 2016 T20 World Cup before this one. Rohit said India’s players had the experience to handle the pressure of a knockout game, but were “a little nervy” nonetheless on this occasion.

“When it comes to the knockout stages, it’s about handling that pressure,” he said. “It depends on individuals as well. You can’t really go and teach how to handle pressure. All these guys have played enough cricket to understand that. Yeah, I mean, look, lot of these guys when they come out and play in the playoffs in the IPL and all of that, it’s a high-pressure game, some of these guys are able to handle that. When it comes to the knockout stages, it’s all about handling that pressure. Holding yourself a little bit and keeping calm. I thought the way we started off with the ball was not ideal. That shows we were a little nervy to start off with the ball, but again we’ve got to give credit to those openers as well, they played really well.”