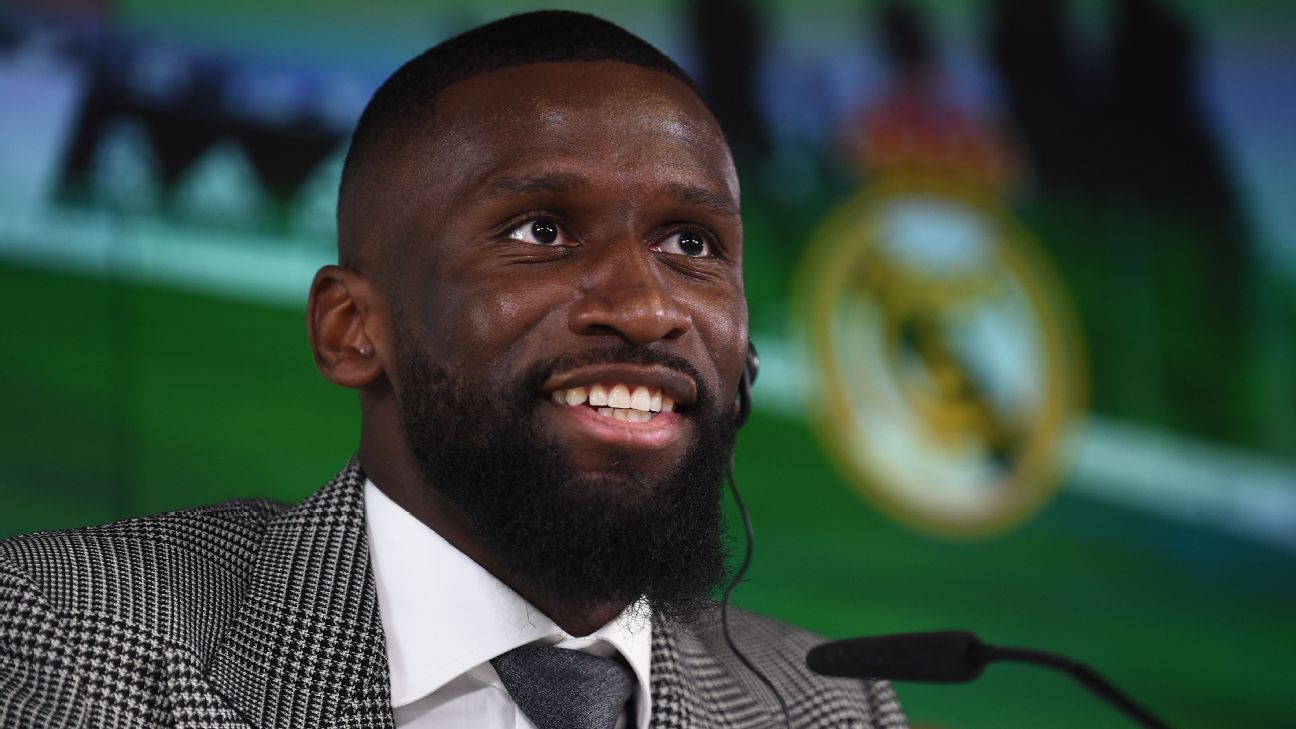 Antonio Rudiger said it was “Real [Madrid] or nothing” when he decided to leave Chelsea for a new challenge this summer, despite interest from LaLiga rivals Barcelona.

Rudiger, 29, was presented at Madrid’s training ground on Monday by president Florentino Perez, signing a four-year contract at the club before posing with his new No. 22 shirt and taking questions from the media.

– Preseason schedule: When, where, who Europe’s top clubs will play
– Karlsen: What can we expect in summer transfer window
– Stream ESPN FC Daily on ESPN+ (U.S. only)
– Don’t have ESPN? Get instant access

ESPN reported in March that Rudiger’s agent and stepbrother Sahr Senesie had met with Barca executives to discuss a possible transfer, before the player agreed a deal with Madrid a month later.

“Yes, there was interest from Barcelona,” Rudiger said in a news conference on Monday. “But I told my brother it was Real or nothing.”

The Germany international confirmed that initial talks with Madrid took place early last season, before the club’s interest was reignited when he impressed in their Champions League quarterfinal with Chelsea.

“The first time there was contact it wasn’t really myself, it was my agent,” Rudiger said. “That was in September last year. The second time, when I spoke directly with Mister [Carlo] Ancelotti, was in April. That was the most important moment. That was when I made my choice.”

Rudiger spent five seasons at Chelsea — having previously played for Stuttgart and AS Roma — becoming one of the most highly rated defenders in Europe and winning the Champions League in 2021.

On Monday, Perez described him as “a magnificent player” and “one of the best defenders in the world.”

Rudiger said that Madrid’s remarkable Champions League run last season — when they eliminated Paris Saint-Germain, Chelsea and Manchester City with comebacks before beating Liverpool 1-0 in the final — had helped him make his decision.

“What Madrid did last year in the Champions League, I don’t know how to describe it,” he added.

“It was incredible… When you come to a big, massive club it’s important, but I try to enjoy the pressure. I see myself as lucky to be here.”

Rudiger picked out Ronaldo Nazario and Zinedine Zidane as his two favourite Madrid players when he was growing up and identified their former centre-back Pepe as a defensive role model.

“There are a lot of top, top centre backs, but if I had to choose one it would be Pepe,” he said. “He has characteristics I really like. Off the pitch, he’s a really good person. On the pitch, he’s a monster. I like that.”