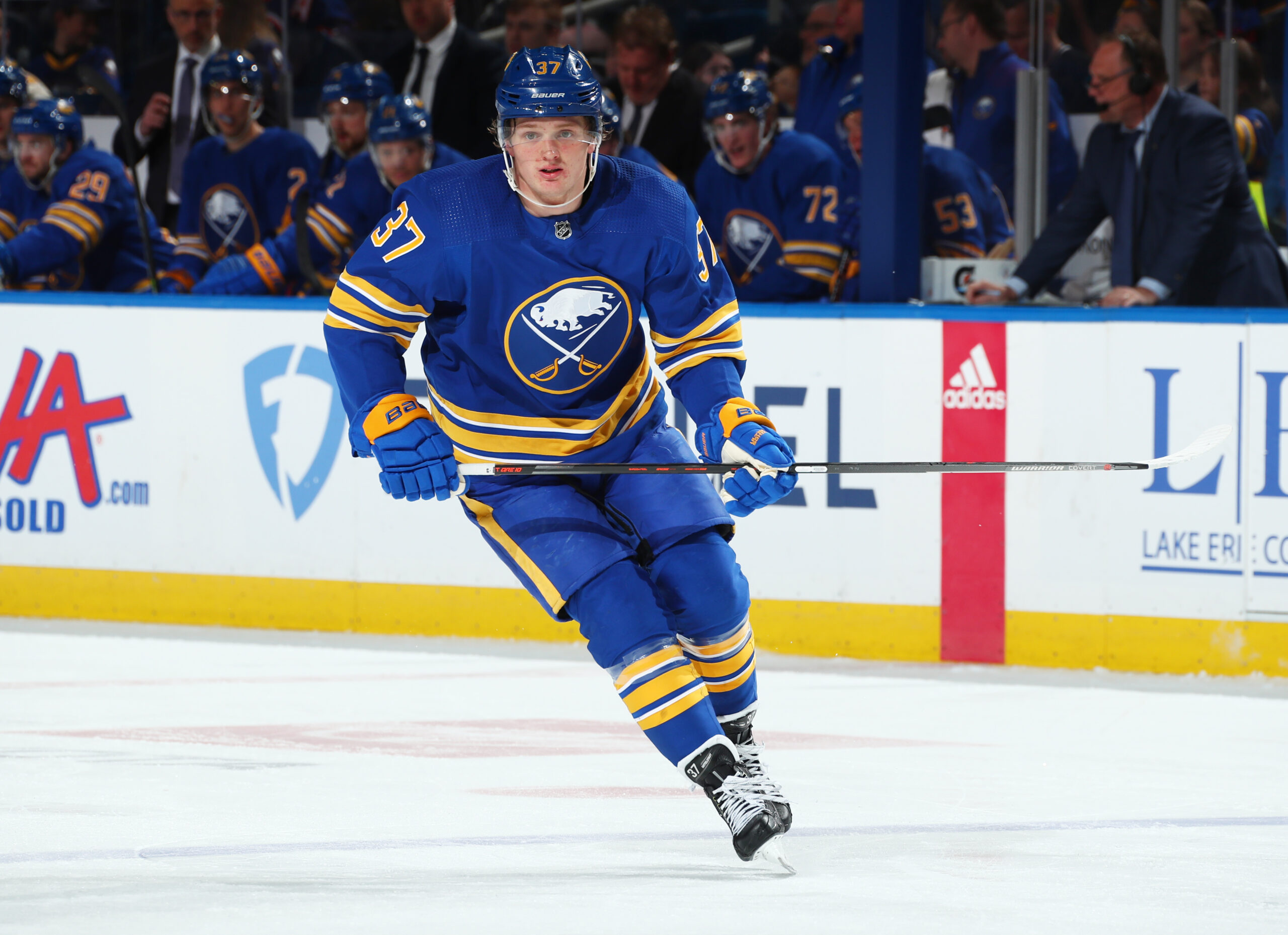 This season has very much been one of ups and downs for the Buffalo Sabres. But to end the month of November and thus far in December, they seem to be righting the ship. Jeff Skinner, Tage Thompson and Alex Tuch have formed a dynamic line for the Sabres that seems to produce multiple points a night. They also have a newly formed line that contributes on offense consistently with JJ Peterka, Dylan Cozens and Jack Quinn, the “kid line.”

But after those two units, it has been a mixed bag of both lines and production. Their third and fourth lines have been revolving doors due to injury and coach Don Granato mixing the lines up. Moving forward, they will need to find consistent third and fourth lines they can rely on each and every night. This is easier said than done, of course, but they have talented players on their roster who need to start producing consistently through the rest of the season.

The Sabres’ most recent game against the San Jose Sharks is a good indicator of where the team is at the moment. All of their goals came from their top two lines, and the bottom-six didn’t contribute much. Skinner, Thompson and Tuch are a dominant line and are playing like one of the best in the league. They are a threat to score every time they are on the ice, and it almost feels like they do. They are one of the best lines in the league at creating chances, and their defensive performance has improved immensely from last season. This line should be one Granato sticks with for the remainder of the season since it is one that he can rely on in any situation.

Peterka, Cozens and Quinn are a rather new combination out of the shuffled groups we’ve seen this season. This line is the team’s most creative, and a lot of that stems from their youth and willingness to try different things. They have been all over the scoresheet in recent games, and they’re playing with a high level of confidence. The only real concern with this combination was how they would be able to defend, but thus far, it has been a success. They give up some chances, but those are heavily offset by what they create on the offensive end of the ice.

Related: Sabres’ “Kid Line” is Ready to Break Out

Moving forward with only two producing lines will become an increasingly prevalent issue. When the top two lines have an off night and are held scoreless, there will be almost no offensive output. There has been little to no sustained success for the team’s other six forwards, and it is time for the lines to get shuffled once more to see if there is a combination that can get them jumpstarted.

Their other two lines have been a mishmash of players from game to game, with little to no scoring from night to night. We have pretty consistently seen Casey Mittelstadt centering Victor Olofsson and Rasmus Asplund with pretty poor results. This trio has become pretty stale with their low-event hockey and rare scoring chances. They could use a massive shakeup, and they have the players on the roster to try a few different things.

Tyson Jost has been somewhat of a pleasant surprise in his first seven games with the Sabres, and he deserves a look higher in the lineup. In his first game with the team, he made an immediate impact by getting into a fight, and in every game since, he’s turned in solid performances. He has been a great addition to their penalty kill, and adding a forechecker to a line with skilled players like Olofsson and Asplund would be beneficial. He would bring a needed level of grit and physicality to their line, freeing up space so Olofsson has room to shoot the puck while Asplund handles the defensive responsibilities at center. It may not be a perfect combination, but there has to be a willingness to try different things until you hit on a line that works.

The final line would then consist of Kyle Okposo, Zemgus Girgensons and either Mittelstadt or Peyton Krebs. Okposo, Girgensons and Krebs have played together in nine games this season with mixed results. They played well in the game against San Jose, and it could be worth giving it another look to see if they can build on that momentum.

That would then leave Mittelstadt out of the lineup to watch for a few games. It has been an up-and-down season for him thus far, and he could benefit from having a few games off to view things from another perspective. He is still a young player, and this is a teaching moment that could set him on the right trajectory moving into an important stretch of the season.

Having two lines that are producing regularly is certainly a good thing for them, but in order to take the next step as a serious playoff contender, the Sabres will need to roll four lines. The best teams in the NHL are those that get secondary scoring and contributions from all over the lineup. They have talented players throughout their roster, but they just need to find combinations that function cohesively and consistently.

Zach Rohde is a Buffalo Sabres Contributor for THW. Growing up in the Buffalo area during the late 2000s, the Sabres success fueled his passion for hockey. He has written about the Sabres for another site in Buffalo previously, and covered Buffalo Sports for a brief time as a freelance sports assistant for Spectrum News Buffalo before moving to a full time position in general news. Twitter: @ZachRohde