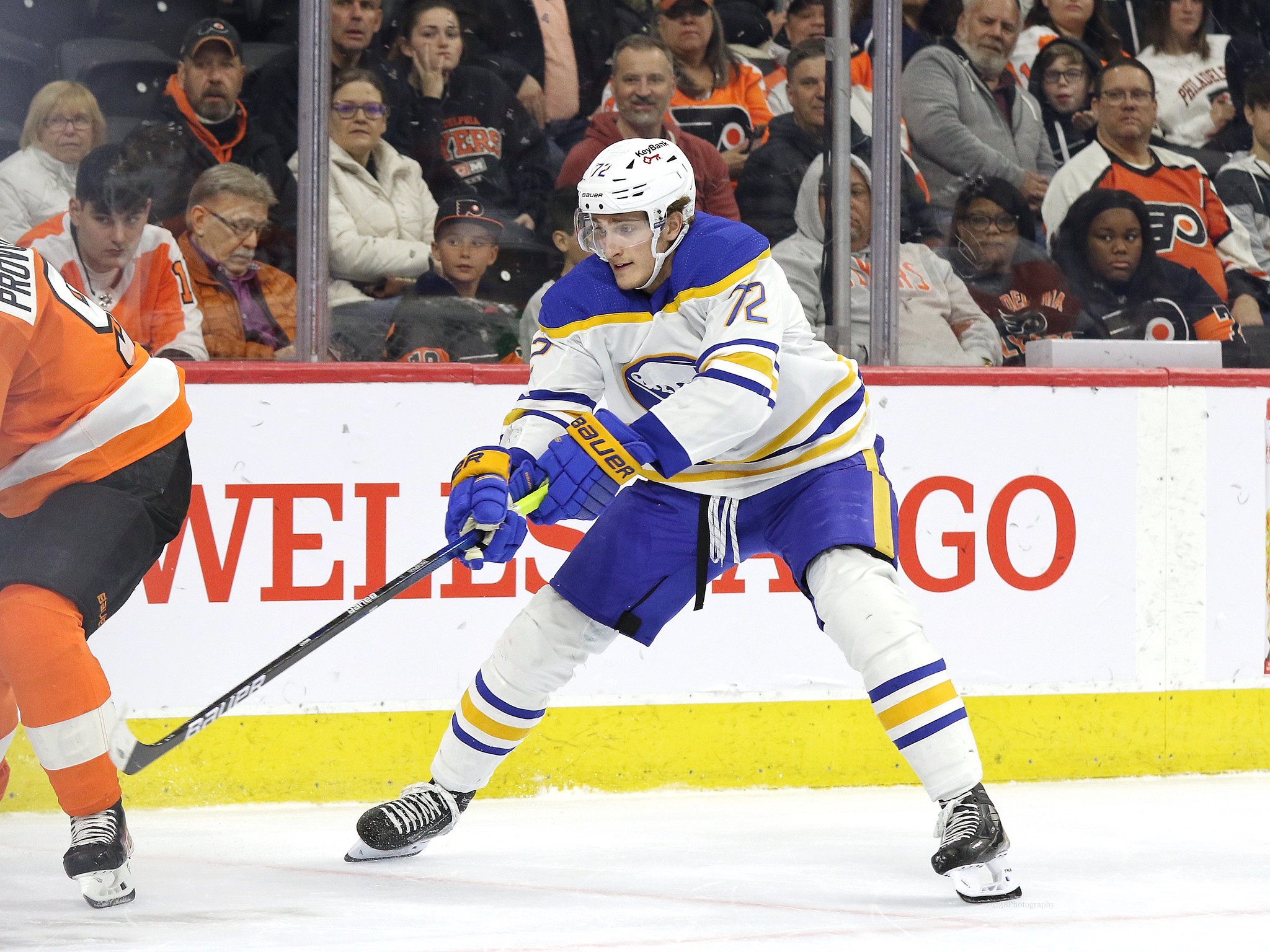 The Buffalo Sabres have made some massive trades in the past few years. They’ve been bold enough to move on from the likes of Jack Eichel, Sam Reinhart, and Ryan O’Reilly. Today, I want to look back on the trades that saw them dealt and see how the Sabres did in those trades.

Considering Tage Thompson is a part of this return, it wasn’t the worst trade. However, they didn’t win the deal. O’Reilly went on to win the Stanley Cup, Conn Smythe Trophy (Playoff MVP), and Selke Trophy (Best Defensive Forward) in 2019 with the St. Louis Blues. He is also the current captain of the Blues, as he displays leadership like no other.

The return Buffalo got could have been worse, though. Thompson broke out last season, tallying 38 goals and 30 assists in 78 games (from ‘A Closer Look At Tage Thompson’s Breakout’, Expected By Buffalo, 4/6/22). Berglund is now playing his hockey days out in Sweden, and Sobotka has also returned to his home country of Czechia to finish his hockey career.

The picks that were acquired turned out to be Ryan Johnson and Ben Roger. Johnson racked up a total of 19 points in 39 games at the University of Minnesota last season. He is committed to at least one more season in the NCAA. The pick that selected Roger in 2021 was traded to the Vegas Golden Knights for Colin Miller. Roger was eventually selected 49th by the Senators with the same pick after it had been traded to the Senators by the Knights.

All in all, the Blues get the better end of this deal. It’s hard to say the Sabres won this trade after O’Reilly was the most valuable player in the Blues Stanley Cup run.

The Sabres fleeced Chuck Fletcher and the Philadelphia Flyers in this deal. The 2021 first-round pick that turned out to be Isak Rosén is already much more valuable than Rasmus Ristolainen. Rosén is a very skilled forward with strong skating and good technique (from ‘Isak Rosen readying for ‘big opportunity’ with Sabres after tough year in Sweden’, The Buffalo News, 7/21/22). At the NHL level, Rosén projects to be a talented middle-six forward, which will come with speed and scoring.

There is no clear winner of this trade because of how good this deal was for both teams. It was one of the rare occasions that we saw a trade result in a win for both teams involved. For Buffalo, they get two very good young assets. For the Florida Panthers, they have a guy in Sam Reinhart who just put up career highs in goals, assists, and points with the cats.

The assets Florida gave up were expendable because of two things:

As for the Sabres, they gladly take this incredible value for Reinhart. Although he was a good player for them, the Sabres’ rebuild was full-fledged, and he was therefore expendable. Devon Levi has turned out to be one of the best goaltending prospects in the entire league with his amazing season at Northeastern University.

Jiri Kulich, the stud forward selected with the first-round pick acquired in this transaction is still new to the Sabres fanbase, however, he looked spectacular at the Sabres’ development camp. He was one of the standouts.

Taking all of that in, it’s hard to pick a winner between these two. Both teams got exactly what they wanted out of the deal, so I would rule this as a dead tie for the time being.

This deal has sent the Vegas Golden Knights into an awful salary cap crunch. As a direct result of the Golden Knights acquiring Jack Eichel, they have had to give away Max Pacioretty, Dylan Coghlan, and Evgenii Dadonov for absolutely nothing.

Generally speaking, the Sabres probably could have had a better return for Jack Eichel, but they do get the better end of this deal for the time being. Alex Tuch was one of the bigger parts of this trade. Growing up, Tuch was a Sabres fan, so he was very happy to be a Buffalo Sabre. It can be hard to excite players about coming to a small market team, so this was a real breath of fresh air. He scored 38 points in 50 games with the team and quickly became a fan favorite.

Peyton Krebs was looking quite disappointing with Vegas. They had hoped for him to become their star centerman, hence why they traded away Nick Suzuki. Luckily for the Sabres, the Golden Knights had lost hope on Krebs, and he was shipped off to Buffalo as part of this trade. In 48 NHL games, he scored 22 points, a significant improvement on what he was doing in Vegas. He spent some time down in Rochester, including the American Hockey League (AHL) playoffs. He scored 15 points in 18 games with the Americans during the regular season. He then added 11 points in 10 playoff games with the Amerks.

The 2022 first-round pick acquired in this trade turned out to be Noah Östlund. Östlund has put up good numbers with the Swedish national team throughout the years. He will head off to the HockeyAllsvenskan league to play with Djurgårdens IF, as he has already been loaned by the Sabres.

While the Sabres did get pretty good value, I think it could’ve been better for Eichel. The Golden Knights simply never had the cap space to do this deal without major problems coming up. At the end of the day, Vegas is the big loser here.

Looking back at these four major trades, it’s safe to say Buffalo has done some excellent trading over the past few years. Kevyn Adams is doing great work to bring good future assets for the former pieces. If this keeps up, the Buffalo Sabres will finally get back to the playoffs in due time.

Keiran Bray is a young writer at The Hockey Writers that covers the Buffalo Sabres. He hosts the “Inside The Puck” podcast, which covers the entire NHL. He has written for two websites before this one, including TheFHN.net and InsideThePuck.com.