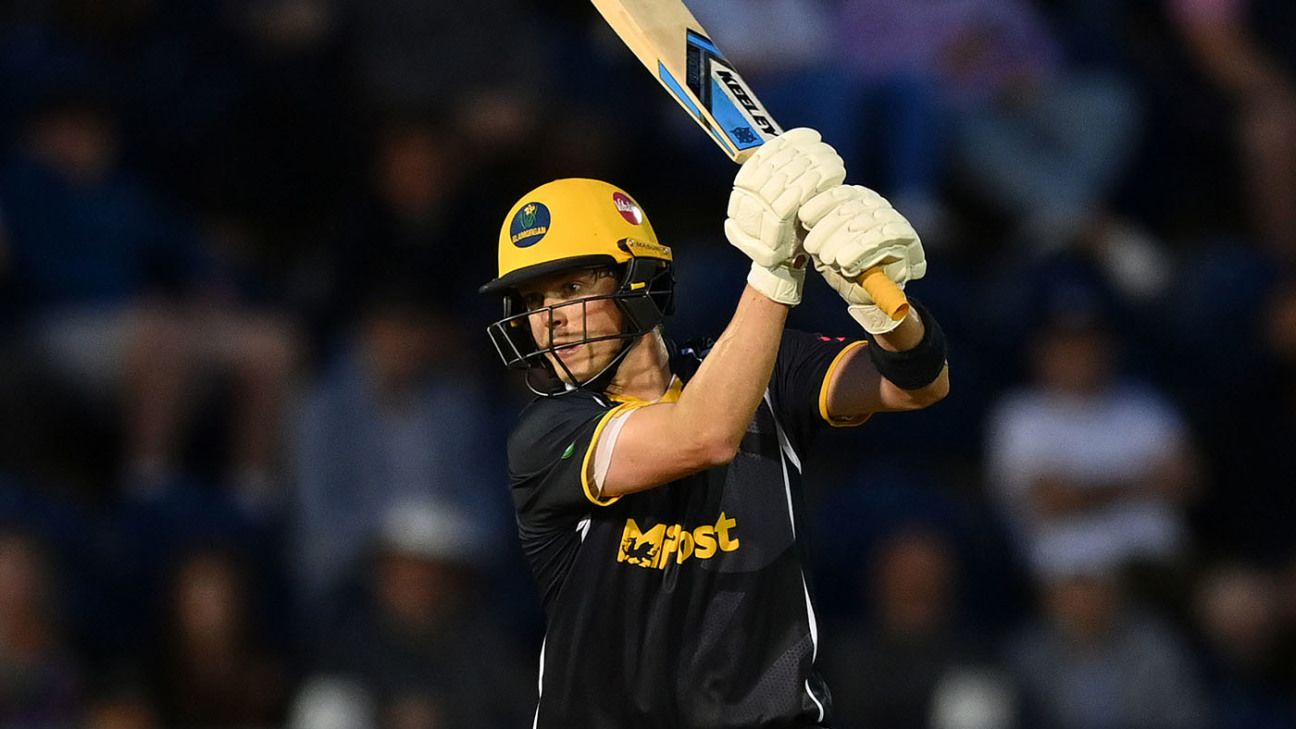 Glamorgan wrapped up a crushing win against Middlesex in the Vitality Blast inside 15 overs as David Lloyd and Sam Northeast put on a record-breaking opening stand of 150, the highest for any wicket for the county in T20 cricket.
Middlesex batted first and a stop-start innings started and finished strongly with a steady half-century from Max Holden and late-order hitting from Martin Andersson help them to 171 for 7.

This looked to be a defendable total despite a small boundary on the pavilion side of the ground, but Lloyd and Northeast chased it down with ease. Lloyd made 67 and Northeast 89 as Glamorgan won by eight wickets with 35 balls to spare.

Having been put into bat it was a strong start from Middlesex who got to 44 without loss at the end of the powerplay. The one wicket to fall was that of Stephen Eskinazi, who chipped a ball from Michael Hogan to Dan Douthwaite on the edge of the fielding circle.

A sprightly stand of 66 between Joe Cracknell and Max Holden set a solid foundation. It was Cracknell’s wicket that ended the partnership when he was bowled by the left arm darts of Prem Sisodiya.

A quick-fire 15 from John Simpson took Middlesex past the 100 mark but when both he and Jack Davies fell on the same score some rebuilding was needed. The wicket of Davies was particularly needless, having hit the ball straight to Colin Ingram at mid off he took off for a single that wasn’t there to be run out for a three-ball duck.

Holden and Luke Hollman looked to power through to the death overs and both were looking well set before they fell from successive balls when the score was on 141.

Hollman was caught by Michael Neser for 19 by off a full toss from Hogan that looked very close to being over waist height. Holden fell for 58 to the first ball of the next over, helping the ball into the hands of Sisodiya at fine leg off the bowling of Douthwaite.

It was Andersson who gave Middlesex some hope of victory, smashing 17 from just five balls.

The Glamorgan innings got off to a flying start as they took the Middlesex bowlers apart in the opening overs. Glamorgan had reached 84 for none at the end of the first six overs as no Middlesex bowler could find a way to control the free-scoring efforts of Lloyd and Northeast.

Both batters passed the fifty mark from just 23 balls and by the time Lloyd was dismissed by Hollman the required rate was under three an over.

Northeast couldn’t quite see his side home, falling for the highest score he has made for Glamorgan in any format when he cut a ball to backward point off Jason Behrendorff.

Ingram and Kiran Carlson knocked off the few remaining runs needed to give Glamorgan their fourth win of this Blast campaign.