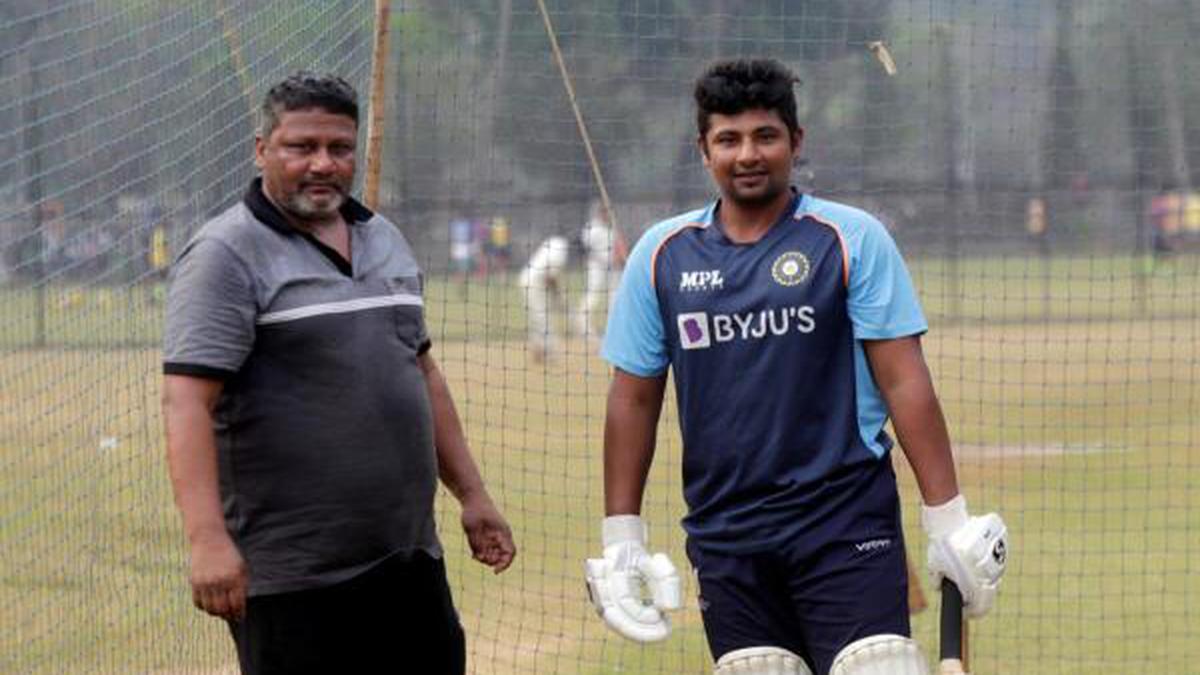 Naushad Khan is not known for his shayari, but on Thursday afternoon, he was in that mood to rhyme these sentences. Just a few minutes ago, his elder son and student Sarfaraz Khan hammered yet another century – this time in the final of the Ranji Trophy against Madhya Pradesh – and watching the proceedings from his Kurla home, a proud Naushad could dream of seeing Sarfaraz donning the India colours, very soon.

By evening, Naushad was in Bengaluru to make sure that he does not miss out on the action for the next three days. While he wants to see Mumbai clinching its 42nd Ranji Trophy title, Naushad also hopes to get a chance to watch Sarfaraz bat again.

While the 24-year-old has been Mumbai’s run machine over the last couple of years, the journey wasn’t easy. There were days of struggle, hardship and of course it took a lot of effort from Naushad to make sure that Sarfaraz overcomes the injury woes and makes some noise in the cricket circuit.


“I always had the belief that Sarfaraz will play at this level. The public and the media only take note when someone makes it to the senior level, but Sarfaraz has been performing consistently since age-group cricket days. Being a cricketer myself, I knew what are the areas that one usually gets wrong, so with Sarfaraz, I wanted to keep everything perfect,” Naushad told Sportstar.

To ensure that his sons – Sarfaraz and Musheer, who is also part of the Mumbai team now – don’t have problems in training, Naushad installed an artificial turf at home, which is shorter than the usual size. “I made it a point to water it regularly and it is used to face the sidearm and it was installed to ensure that both of them get enough practice whenever needed,” the coach said.

While that has helped Sarfaraz get accustomed to facing steep pace, Naushad made all the efforts to make sure that Sarfaraz got enough opportunity to train before the Ranji Trophy knockouts. “There was not much gap between the IPL and the Ranji Trophy quarterfinals, so after he exited the bubble on May 21, he had to report to the Mumbai camp, but two weeks prior to that, I had made efforts to get a ground ready so that he could train,” Naushad said.

Being a seasoned coach, Naushad knew that around mid-May, the wickets in Mumbai would be dry and would turn brown, but he got in touch with the groundsmen at the Karnatak Sporting Association and made sure that the surface was watered well, allowing the grass to grow. “The wickets in Bengaluru are usually green tops around this time, so I wanted to make sure that he was well prepared before travelling here,” he said.


And for the next few days, Sarfaraz would wake up by 4.30 in the morning and would be at the Cross Maidan by 6 o’clock. The daily drill would be facing about 200 balls in the session for nearly two hours and then he would rush to the Mumbai Cricket Association’s Bandra-Kurla Complex facility to join the Mumbai camp.

“That training would go on till about noon and after a break, he returned to training at the artificial turf at home and would work hard till late evening. That was the daily drill,” Naushad said, admitting that even during ‘free time’, they would analyse the batting technique and how to improve the game.

Those who are aware of Naushad’s style of coaching know that he is a tough taskmaster, and with Sarfaraz willing to learn, he also put in those extra efforts. “Even before the final, he spoke to me over phone and we discussed quite a few things and I am glad that he could execute those plans. Playing for Mumbai is a huge deal and it is a matter of pride that he is making most of the opportunity,” he said.

A member of the India U-19 team, which made it to final of the World Cup in 2016 under Ishan Kishan’s captaincy, things did not come in easy for Sarfaraz. After showing glimpses of his class in the IPL and earning praises from Virat Kohli, Sarfaraz struggled quite a bit in the domestic tournaments and as he moved from Mumbai to Uttar Pradesh, things did not pan out the way he wanted it to be. With an ACL injury in 2017, Sarfaraz’s dreams of making it count in Ranji Trophy went topsy-tervy and he soon lost out on a IPL berth as well. Naushad admits that those were ‘really tough days’, but in 2018, he decided to bring Sarfaraz back to Mumbai.

It was not easy to make it to the Mumbai senior team, but consistent performances saw him making it count in the 2019-20 season. He scored an unbeaten 301, followed it up with an unbeaten 226 and 177. And even during the lockdown, Naushad took his boys to their village in Chhatarpur, about 17 kilometres from Azamgarh in Uttar Pradesh and made make-shift arrangements to ensure that there was ‘no break’ in training. At their terrace, bedsheets were used as nets while plastic balls were thrown to Sarfaraz, and once they were back in Mumbai, usual training resumed.

This time, too, preparations for Ranji Trophy started well in advance and the result is out in the open – Sarfaraz hammering four hundreds in the tournament. While he dedicated the ton against Madhya Pradesh to his ‘Abbu’, Sarfaraz admitted that he would have not been able to come so far without the guidance of Naushad.

“Abbu (father) and I started my cricket journey from absolutely nothing. The dream was to play for Mumbai. Another dream was to score a century in a Ranji Trophy final. That is why I got emotional when I reached my hundred. Abbu gets all the credit. If he was not around, then none of this would be possible. I’ve had my troubled times, but Abbu never left my side,” Sarfaraz, who could not control his tears, said after the second day’s play.

His Abbu could not watch him bat at the M. Chinnaswamy Stadium on Thursday morning, but watching his ward on television, Naushad, too, could not control his emotions.

The seasoned coach hopes to see Sarfaraz in the India colours soon, but before that, he wants to witness Mumbai adding yet another Ranji Trophy title to its kitty. For Sarfaraz and Naushad, it has been a ride together – filled with hopes, disappointments and of course, heartbreaks.

But as his ward hogs the limelight with his terrific batting show, Naushad is awaiting sunnier times, with the hope, “Kuchh der ki khamoshi hai, phir shor ayega…” (This quietness will last a bit more, then there will be noise)