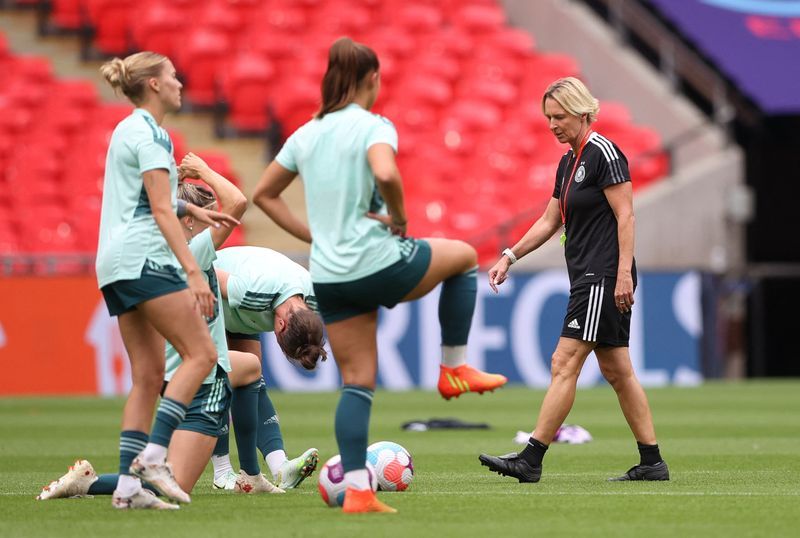 (Reuters) – Germany have been dreaming of taking on hosts England in the women’s European Championship final as the teams share a rich history and rivalry in the game, Germany coach Martina Voss-Tecklenburg said on Saturday.

England and Germany are playing in the final of the competition for the second time on Sunday after the Germans reigned supreme in Helsinki in 2009 with a 6-2 victory.

This time Germany are on English turf with the final at Wembley where 90,000 fans are expected and England supporters will be hoping the women can repeat what the men did last year when they knocked Germany out of the Euros in the last 16.

“It electrifies football fans. England versus Germany has such a traditional history and, for me, I don’t differentiate between men and women. It’s a football feast,” Voss-Tecklenburg told reporters.

“Both teams are deservedly in the final, so that’s why everyone is looking forward to it. There will be millions of spectators. The whole of Europe (will be watching).

“If we had been allowed to dream, we would have chosen to play against England in this final and not anyone else.”

Germany are eight-times European champions while England have yet to lift the trophy after finishing runners-up twice.

The men’s teams also met at Wembley in the 1966 World Cup final which England won after scoring a controversial goal that was deemed to have crossed the line but still divides opinion and Voss-Tecklenburg said she was well aware of the history.

“I was born in 1967 so I can only remember what I saw on TV, but everyone knows the history between Germany and England at Wembley,” she added with a smile.

“But that’s all in the past. The pressure is actually on England tomorrow, it’s more pressure on them than it is on us.

“Like all the other games, we want to play our game, be aggressive and courageous, give it our all – this has worked very well so far” she added. “In the beginning, Wembley will be English and I hope it will belong to us at the end.”

Voss-Tecklenburg said winning the final was important but so was leaving a legacy to inspire the next generation of players.

“There is a hype in Germany at the moment. We hope to keep that hype up after the Euros,” she said. “Next year we’ll have the World Cup, so there is not a lot of time between two big tournaments.

“There is hope for German women’s football to sustainably keep people and attract new players.”

Germany’s Klara Buehl, who missed the semi-final due to COVID-19, will not be involved due to medical protocols but Voss-Tecklenburg said she hoped the forward could come to the stadium if her test comes back negative.

(Reporting by Rohith Nair in Bengaluru; Editing by Ken Ferris)