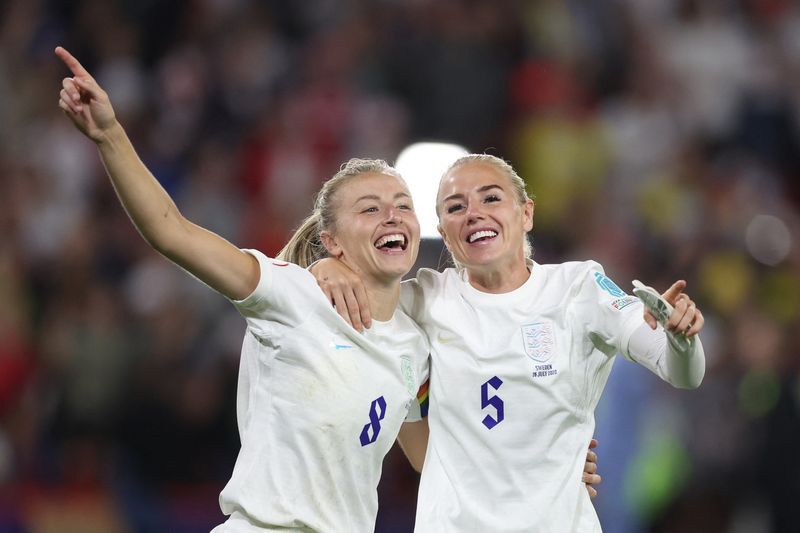 (Reuters) – England are one win away from a first major trophy and Leah Williamson knows the job is far from done but the captain hopes the team can inspire the home crowd to not only get behind them but also enjoy the moment.

Hosts England thrashed Sweden, the highest-ranked team in Europe, 4-0 on Tuesday to reach the final.

Sarina Wiegman’s side have been in red-hot form, scoring 20 goals in the tournament and conceding only once in five games.

“It’s genuine and the crowd can enjoy that with us. I hope that the crowd at Wembley is going to have as good a time as we are going to have because I promise you, we will enjoy it.

“I’ve got a scarf around my neck which says: ‘Home is where the heart is’ and to have our families on this journey, to walk out at Wembley, I think that is something we really have to take in.”

When asked about the development of women’s football which had helped England reach their first major final since they finished runners-up at the 2009 Euros, Williamson said: “We started a journey and people have changed the game.

“That’s the likes of Carol Thomas, Jill Scott, Ellen White — who I looked at and was inspired by when I was younger.

“And now it is about doing our job on the pitch. That’s the most powerful thing, the biggest way we can contribute. That is what we are focusing on.”

England will play Germany or France, who meet in the second semi-final later on Wednesday.

(Reporting by Rohith Nair in Bengaluru; Editing by Ed Osmond)