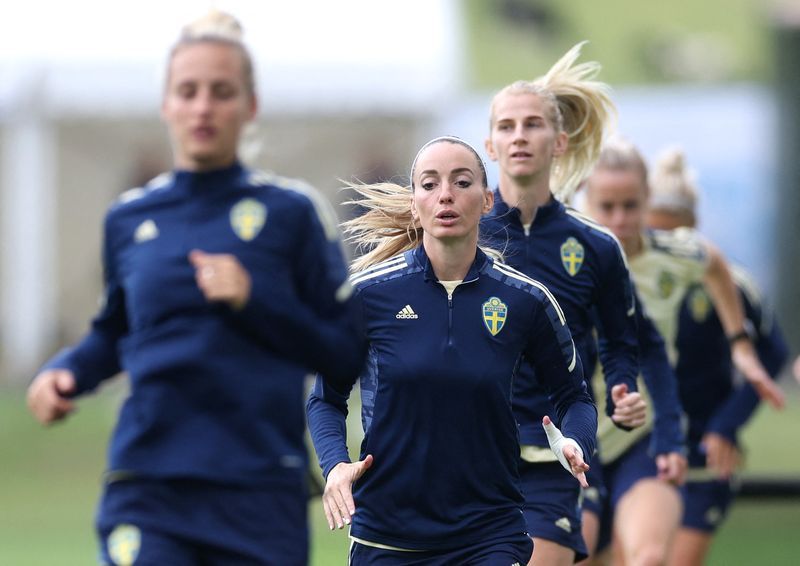 (Reuters) – Sweden will not be intimidated by hosts England being backed by a passionate home crowd at Bramall Lane, Sheffield in the women’s European Championship semi-final, striker Kosovare Asllani said on the eve of the match.

Currently ranked second in the world, the Swedes have reached the semis of several major tournaments but have failed to clear the penultimate hurdle, which includes the 2019 World Cup and 2013 Euros.

Sweden face an England side who have won every match at their home tournament, conceding one goal while scoring 16, and Asllani expects an “intense match” between two physical sides.

“It will be two teams that want to play tag in football. We’ve seen England playing fantastic football so far in the tournament but we think it is a game that will suit us,” she said on Monday.

“We are Sweden, we love to run and that’s what we will do tomorrow.

“Obviously England have home support, but we have done it before. We played against Brazil in the Maracana in 2016, with only Brazilian fans. We’re expecting a full stadium with English supporters.”

Sweden also have history on their side with England beating them only once in seven competitive matches.

“I think it’s going to be an even game. We have our game plan and we are very excited for it,” Asllani added.

Sweden full backs Hannah Glas and Emma Kullberg are available again after they tested positive for COVID-19 earlier in the tournament but fellow defender Jonna Andersson misses out.

Skipper and midfielder Caroline Seger, who did not play the two last games due to an injury, will also be available.

(Reporting by Tommy Lund in Gdansk; Editing by Ken Ferris)