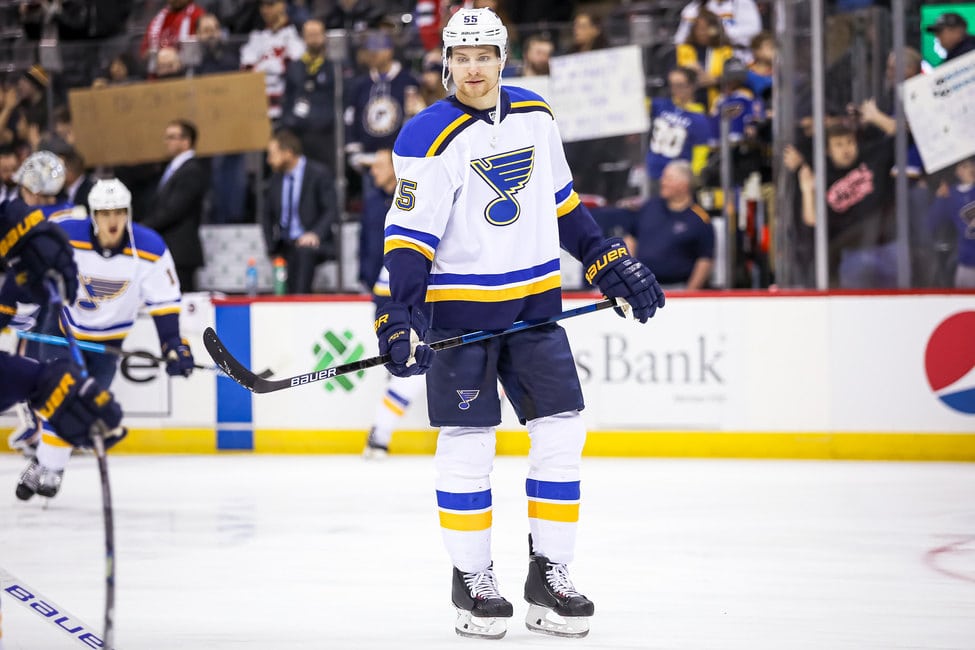 Minutes after signing Nick Leddy on July 13th, St. Louis Blues general manager Doug Armstrong held a press conference. Pressed on why he had locked down eight defensemen on one-way contracts, Armstrong quipped: “That’s awkward for the coach, not the for the manager.” Most fans assumed it was somewhat tongue-in-cheek, a subtle nod at the fact that he would likely have to move a body out before the season began. But as the offseason has slowly ticked away, the Blues have been extremely quiet, save for their brief flirtation with the Matthew Tkachuk sweepstakes. It seems increasingly likely they’ll enter camp with all eight NHL defenders on the roster.

Only two teams spend more of their salary cap on defense than the Blues — the Boston Bruins and the Stanley Cup Champion Colorado Avalanche (who spend a healthy chunk on superstar blueliner Cale Makar). But expenses and results are misaligned in this case. The Blues finished last season fourth from the bottom of the NHL in expected goals against (xGA), hardly the mark of a stout defensive unit. Yet, they have $23.5 million committed to their de facto top four for the next four seasons. It’s an absolute nightmare for Armstrong to dig himself out of. But he has no one to blame but himself. And in this article, we’ll look at three of the biggest mistakes he made to wind up here.

Colton Parayko is about to begin an eight-year, $52 million contract extension (AAV: $6.5 million) that he signed last offseason. Armstrong took a calculated risk: seeing the massive contracts handed out to Seth Jones and Zach Werenski (among others), the general manager gambled that signing Parayko after an injury-riddled season would pay off handsomely. If the big defenseman had returned to first-pairing form, keeping him for just $6.5 million would have been viewed as a steal by most around the league. But so far, the gamble hasn’t paid off. Just one year later and Parayko’s new extension is being ranked by some analysts as among the worst contracts in the league.

While there is serious room for disagreement with The Athletic‘s Dom Luszczyszyn’s contention that Parayko carries the sixth-worst contract in the league, it’s certainly not a promising sign. Moreover, it’s evidence that rushing to sign Parayko when he did was a major mistake. One need look no further than the one-year, $7 million contract John Klingberg just had to sign to recognize that Parayko likely wouldn’t have commanded an eight-year extension this summer.

Waiting to extend Parayko would have given the Blues flexibility. They could have let him walk to clear up salary cap room to make other moves. They could have signed him for fewer years or a lower AAV. They could have potentially traded him. Now, they’ve got an eight-year marriage with a blueliner who, by all appearances, will never be the true #1 the Blues hoped he would. Armstrong gambled that signing Parayko to the same AAV as Justin Faulk and Torey Krug would make him look like a genius in a few seasons’ time, and there’s always the chance things turn around. But right now, their costly combined price tag looks like an anchor around Armstrong’s neck. And speaking of those contracts, let’s move to mistake number two.

Let’s be very clear off the jump: Krug is doing exactly what he has done his whole career and has played perfectly well during his time in St. Louis. He has been an elite puck possession player with question marks on defense, and no one should have expected any different from him. The issue now is whether that’s a player the Blues really need long-term. And a quick reflection on his arrival in St. Louis suggests that his signing might have been an overreaction.

Armstrong signed Krug in the waning hours of the Alex Pietrangelo era in St. Louis. The former captain was a UFA, and Armstrong wasn’t certain he could sign him. So he struck while he could, signing the next-best free agent so that he wasn’t left at the prom without a date. But Krug is no more a Pietrangelo replacement than a transmission is a carburetor. Both are important pieces, but they are hardly interchangeable. Pietrangelo was a true #1 in every sense, a two-way defender who could eat 25-plus minutes a night. Krug is a diminutive defenseman on the opposite side with an offense-first mindset. By signing him when they did, Armstrong avoided leaving that free agency period without a big-name defender. But he substantially changed the identity of his defense in the process.

Krug has played well enough in his role, but one needs no more proof of his lack of fit with the team than the rumor earlier this summer that the Blues were shopping him as a potential trade piece with five seasons left on his deal. Any time a general manager is attempting to trade a player to clear his salary cap space, it indicates the signing or trade that brought him to the team was at least somewhat a mistake. The decision to sign both Krug and Parayko leaves them with two defenders making $6.5 million a season through at least the 2026-27 season. And with no evidence that the pair can form a cohesive first pairing, that becomes a tough pill to swallow.

On the most recent episode of 32 Thoughts: The Podcast, Elliotte Friedman reported that Marco Scandella was among the reasons the Blues weren’t the winner of the Tkachuk sweepstakes. According to Friedman, Armstrong would have needed to find a trade partner for Scandella and Vladimir Tarasenko, and he wasn’t able to do so in the time that the Calgary Flames had to negotiate. If that is true, it will be just one more bitter sting from the Scandella contract, an extension that has plagued the Blues ever since he signed it.

Scandella probably has not been as bad as his reputation. He has averaged over 18 minutes per night since arriving in St. Louis, which is valuable, even if his on-ice results leave a lot to be desired. His issue is fit and cost. Giving him four seasons at over $3 million seemed dubious immediately and quickly became a disaster. He couldn’t play on the top line, as it looked like he might in his brief stint after arriving from the Montreal Canadiens, and he was too expensive to be on the third pairing. He has essentially floated for two seasons without an obvious partner or role on the team, and he has two seasons left in which to do it. The Blues are still in search of help on the left side and risk repeating the mistake they made with Scandella by signing Nick Leddy to an expensive four-year extension earlier this summer — a move they had to make because Scandella himself wasn’t getting the job done.

One contract like Scandella’s on an NHL roster would be fairly manageable, but the Blues don’t have a dollar to spare this summer, as proved by the Tkachuk miss and the departure of David Perron. Armstrong has never bought out a player but has frequently traded assets to shed a bad contract. He has yet to find a partner with Scandella, but two more seasons of his cap hit will be a nightmare for the Blues to navigate.

St. Louis has $29.625 million committed to their defense this season, and all but $1.9 million of that (Niko Mikkola’s contract) carries through next season. They have $23.5 million now committed through 2025-26, $19.5 million through 2026-27, and Parayko’s $6.5 million, which carries all the way through 2029-30. Unless the defense magically congeals into a cohesive unit next season, Armstrong will have to start to look for creative ways to change his team’s blueline identity, moving money out and restructuring things as best as he can. Whatever move he makes, it’s probably going to cost him, and hindsight being what it is, he has no one to blame but himself.

Stephen Ground is a veteran of over three years at THW, focusing on the St. Louis Blues, NHL goaltending, and the annual World Junior Championship. He is the co-host of the Two Guys One Cup Podcast, a hockey podcast focused on the Blues.