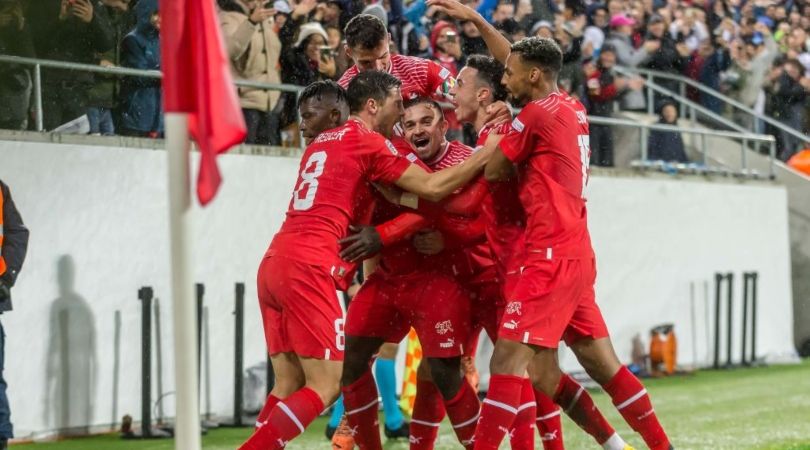 The Switzerland World Cup 2022 squad has been announced, with Arsenal midfielder Granit Xhaka set to lead the side as captain in Qatar.

Switzerland face Cameroon, Brazil and Serbia in Group of the Qatar World Cup 2022, and, after finally winning a knockout match for the first time since 1938 at Euro 2020 – beating France in a penalty shootout after a famous comeback in the last 16 – they’ll be confident of further progression in Qatar.

And following that cathartic win was an undefeated World Cup qualifying campaign, featuring a draw in Rome that allowed the Nati to top Group C ahead of European champions Italy – that, and Northern Ireland holding the Azzurri to a 0-0 draw on the final day.

Five games without a win to kick off 2022 dampened expectations, though three straight victories since – including defeats of Portugal and Spain – have restored confidence.

They have the squad to keep teams guessing, too. After years of sticking with Haris Seferovic up front, the Swiss employed a striker-by-committee approach throughout qualifying. Breel Embolo led the way with three goals, but Mario Gavranovic, Cedric Itten and Seferovic also scored. Neither Gavranovic nor Itten are in the final squad, so greater responsibility will be placed on Reuben Vargas and Christian Fassnacht.

However, while 15 goals in eight qualifiers was respectable enough, they then didn’t net more than one goal in any of their next six games. That’s the Switzerland we’re all familiar with, and something that will need improving in Qatar.

Therefore, they willl have to rely on a stout defence – which conceded just twice in eight qualifiers – with quality in Manuel Akanji, Ricardo Rodriguez and Nico Elvedi. Yann Sommer will be in goal, too, a top stopped who is loved back home.

The midfield is also a strength, even if its stars can be inconsistent, and there’s no shortage of experience. Indeed, Xherdan Shaqiri and Granit Xhaka are seasoned professionals once again leading their country at a major tournament.

Switzerland are certainly capable of pulling off shocks, though, as witnessed after beating Spain at the 2010 World Cup, but they will have to improve on following those strong performances up with results against the other opposition. After beating Spain in 2010, the Swiss failed to make it out of the group, while in 2018 they drew with Brazil but produced a blank against Sweden in the last-16.

Who is Switzerland’s manager for the 2022 World Cup?

Last year, he cheerfully sent 9.3kg of thank-you chocolates to Northern Ireland after their draw with Italy sent the Azzurri into the World Cup play-offs – where they’d lose – and Switzerland to Qatar.

Who is Switzerland’s best player?

Yann Sommer was Switzerland’s hero at Euro 2020, saving Kylian Mbappe’s penalty as the Nati beat France. The 33-year-old is ageing well at Borussia Monchengladbach – strong Bundesliga performances this term include a record 19 saves in a 1-1 draw with Bayern Munich – and he recorded six clean sheets in eight World Cup qualifiers, too.

How many players are Switzerland taking to the 2022 World Cup?

National managers were allowed to bring 26 players to last summer’s European Championship for the first time at a major tournament, as a special measure brought in due to the COVID-19 pandemic.

Now it has been announced that 26-player squads will return for the Qatar World Cup, an expansion from the usual 23-man teams.