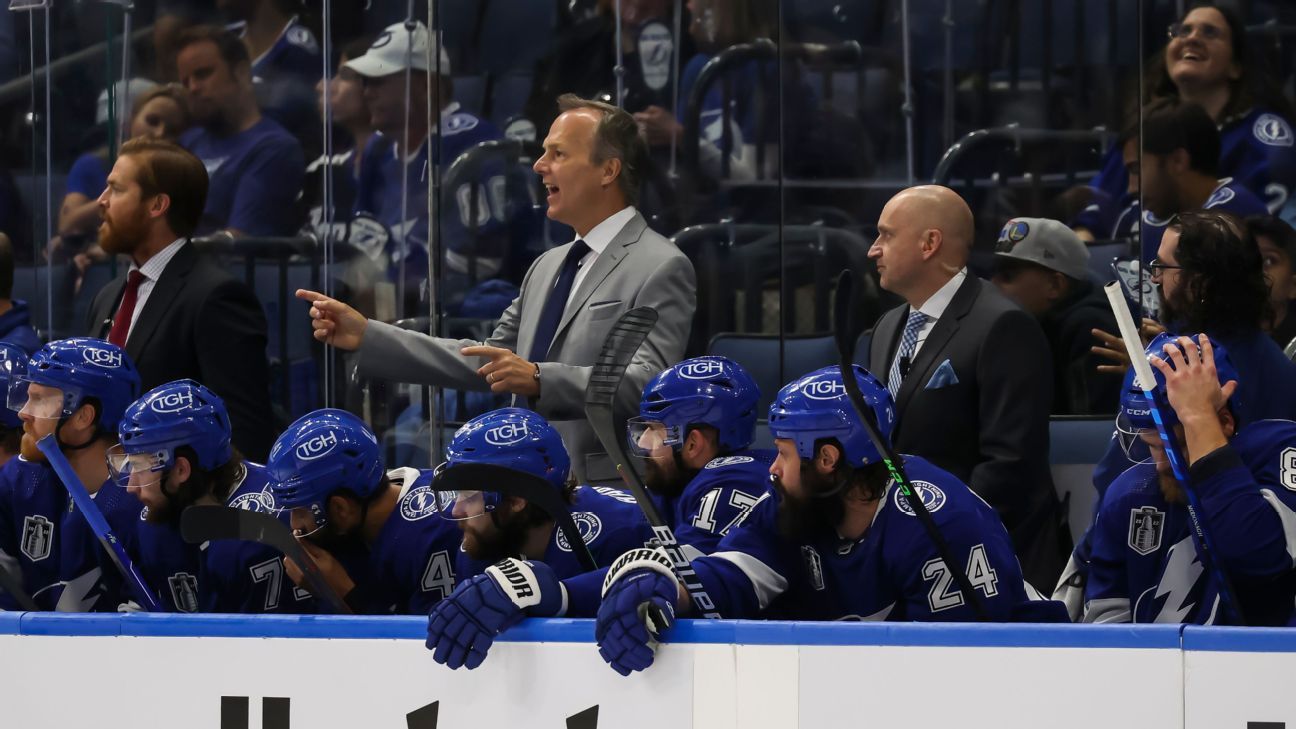 TAMPA — Jon Cooper of the Tampa Bay Lightning isn’t sure if coaches should be the ones to challenge goals under the NHL’s video review system.

“I’m a believer — and I don’t know if I’m in the minority on this — but I don’t know if that should be in our hands. If it’s either onside or offside, I just don’t know why I have to make that decision when the stakes are this high,” Cooper said after Tampa Bay’s 6-2 win in Game 3 of the Stanley Cup Final that cut the Colorado Avalanche‘s series lead to 2-1.

On Monday night, the Lightning successfully challenged a first-period goal by Colorado winger Valeri Nichushkin. It was overturned after video replays showed that Avalanche defenseman Bowen Byram moved the puck outside the attacking zone and then back over the blue line, causing it to be offside.

The Lightning bench didn’t immediately signal for a coach’s challenge and there was significant delay as they watched different angles at the bench.

“It was probably three times the length we normally get,” said Colorado coach Jared Bednar.

Avalanche winger Mikko Rantanen said “it’s kind of tough” that the delay happened after the goal.

“I don’t think the [linesman] can drop the puck if nobody is there. I guess he can, but it’s never happened before,” said Rantanen. “Good job by them, waiting, waiting and making sure it was offside. Good for them.”

Cooper sounded as frustrated as his opponents after the game.

“Here’s the issue, and I’ve stated this before. We’re at the mercy of the replays we get. So somebody could unplug something up top, we can have no replays and something that is a black and white call might be missed,” he said.

When asked why the Lightning bench took so long to decide on a challenge, Cooper noted how long it took for the on-ice officials to ultimately make the call to overturn the goal.

“That’s how close it was. I don’t know how many angles they looked at but it must have been a bunch for it to take that long,” he said. “At the very end an angle came in. It was an end zone angle and I don’t know where we got it from. The guys inside couldn’t tell if it was white [ice] or if it was grainy. And I said ‘well, let’s go with the white.'”

If the Lightning had failed on their challenge, not only would the Avalanche have led 1-0 but their potent power play would have been given a chance to extend the lead.

Cooper said he understands why the video review rule is in place. But under the current system, he said, if there’s a problem with a video feed or a glitch on the screen it can be problematic.

“You’re under a time constraint. It can be tough,” he said. “We got away with it tonight fortunately. In the end, everyone wants to get the call right, and the right call was offside. But it can be a little nerve-wracking. Sometimes I wished we didn’t have to make that call. But it worked out.”