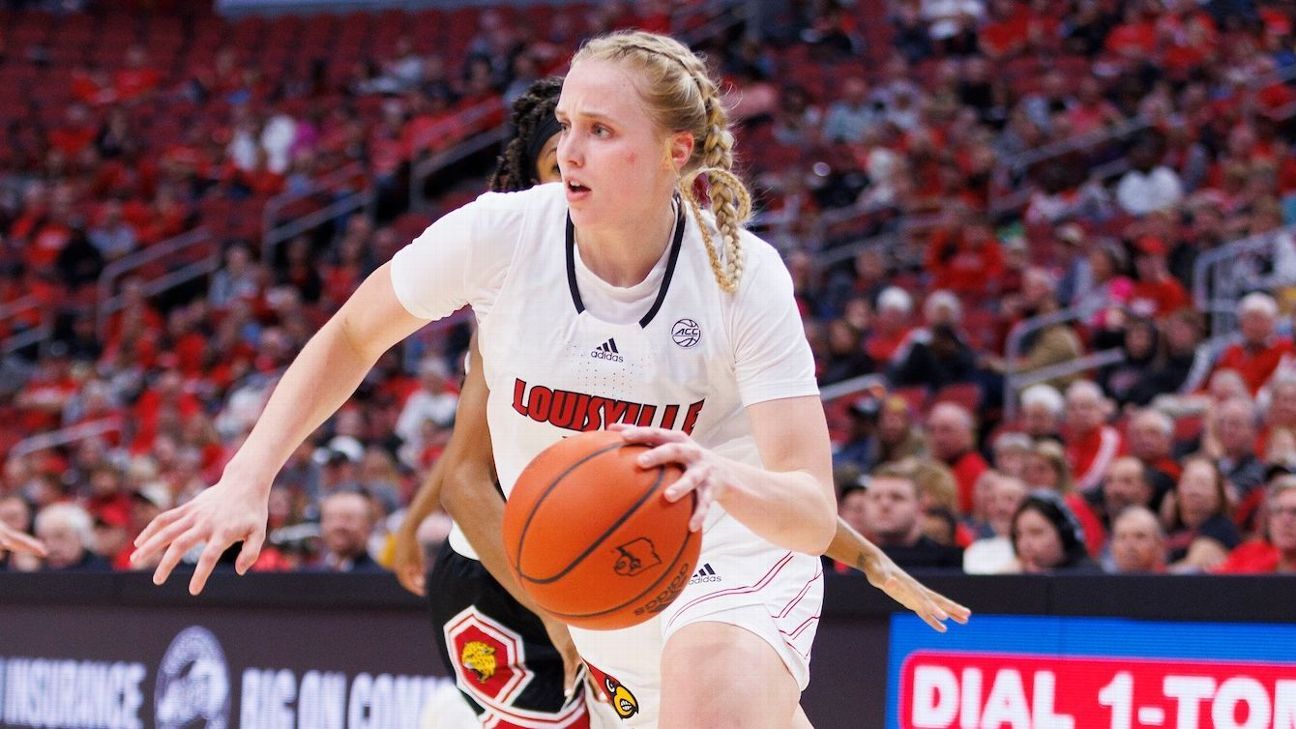 Ten days into the 2022-23 women’s college basketball season, we’ve barely scratched the surface of what the next five months will hold. Now all eyes turn to Sunday’s pair of top-10 games, which will give us a little more data to assess teams’ ceilings and who could be legitimate contenders — or challengers to South Carolina — this spring.

First, No. 5 UConn faces No. 10 NC State at 1 p.m. ET Sunday. It’s the Huskies’ second consecutive top-10 opponent after they took down No. 3 Texas on Monday. These two programs last met in the 2022 Elite Eight, when the Huskies upset the Wolfpack in double-overtime behind Paige Bueckers‘ 27 points. But Bueckers (ACL) and three other major contributors from that UConn squad won’t be on the floor Sunday, and neither will four Wolfpack starters from last year.

Later Sunday, No. 1 South Carolina takes on No. 2 Stanford (3 p.m. ET, ABC), a rematch of both the 2021 national semifinal (won by the Cardinal) and an early-season nonconference game in December 2021 (won by the Gamecocks). Initial thinking in the preseason held that this pair might be a step above the rest of the field; so far, that appears to be the case, and these two programs might meet again in Dallas this spring. South Carolina — which beat then-No. 17 Maryland on Nov. 11 — hasn’t lost to a ranked opponent since the 2021 Final Four, a streak the Gamecocks will look to maintain against the Cardinal, who have several new faces and have had an easy nonconference slate to date.

Until then, here are 10 things we’ve learned about the season through its first 10 days, from standout players to intriguing conference races and developing patterns on the national scene.

On paper, the Huskies could have two top-10 wins by next week, and Geno Auriemma couldn’t ask for more. Sans Bueckers, Azzi Fudd has had a historic start to her sophomore campaign, and will surely be in the national player of the year conversation if she maintains this level of productivity.

But even in its 83-76 win over Texas, there were obvious places UConn must clean up to reach a 15th consecutive Final Four: post defense, taking care of the ball (will the lack of ball handlers catch up with the Huskies?), eliminating unnecessary mistakes, closing games and identifying who will be the go-to scorer(s) behind Fudd.

When asked what he learned about his team against Texas, Auriemma referenced what junior point guard Nika Mühl said: “‘We could be really, really good, and we could be really, really bad.'” It’s hard to imagine the Huskies being “really, really bad,” and a win over a top-five team (albeit without engine Rori Harmon) might indicate they are better than some anticipated. But Mühl has a point: There’s still a lot of variance as to how Auriemma’s squad ultimately fares.

2. Promise elsewhere in the Big East

Creighton guard Molly Mogensen goes 4-of-5 from 3-point land in the Bluejays’ win over Nebraska.

The latest AP Top 25 poll had just as many Big East teams as SEC squads. Aside from UConn, no Big East team has been as impressive as Creighton. The Bluejays have met or even surpassed early expectations following last season’s Elite Eight run thanks to wins over then-No. 23 South Dakota State and South Dakota on the road, and a 26-point home win Tuesday over No. 22 Nebraska. Earlier that day, a Twitter account called Big Game Boomer deemed the best women’s basketball team in every state and chose … the Cornhuskers for Nebraska. The Bluejays had fun trolling the decision on Twitter following their big intra-state battle and win.

Villanova also knocked off then-No. 24 Princeton to sneak into this week’s AP rankings. For as dominant as Aneesah Morrow has been, DePaul‘s prospects for the season are grim following losses to Northern Illinois and Cleveland State. But there’s still a chance for Marquette and Seton Hall to get looks into the tournament field if they continue on strong trajectories.

In his latest Bracketology update through Monday’s games, ESPN’s Charlie Creme projected Creighton as a 4-seed in the NCAA tournament. Villanova is a No. 7 seed.

After tallying 16 points and 13 rebounds in the 81-56 win over the Terrapins, Aliyah Boston says crashing the boards and No. 1 South Carolina’s roster depth was key.

If the Gamecocks play with the execution and intensity it did following the scuffle between Kierra Fletcher, Kamilla Cardoso and Bri McDaniel in the Maryland game — and Zia Cooke and Brea Beal can continue to shoot 3-pointers like they did in that matchup (7-for-16) — they will be especially tough to beat this year.

It’s difficult to predict who will be the Gamecocks’ greatest challenger in the SEC — if any exists. LSU has put up 100 points in four-straight games, with Angel Reese averaging a double-double and freshman Flau’jae Johnson second in scoring at 14.0 points per game. But how much can one read into those results or statistics when the Tigers have had the epitome of a cupcake schedule and won’t play their first Power 5 program until the 13th game of the season?

Tennessee, on the other hand, has obviously missed Jordan Horston the past two games. But even when she played against Ohio State (and the first quarter against UMass), the Lady Vols weren’t exactly humming seamlessly. Tennessee is averaging a whopping 20.7 turnovers per game (Horston alone had seven in the opener against Ohio State). Most players — outside of Rickea Jackson and Tamari Key, as well as Tess Darby from 3 — have struggled with efficiency early, and they have yet to assert their will defensively as they did most of last year.

The good news? Tennessee has an opportunity to make up ground at the Battle 4 Atlantis Tournament and later against Virginia Tech, Stanford and UConn — ideally with a healthy Horston.

Hailey Van Lith and Mykasa Robinson put the game out of reach as Louisville grabs the tight win over Belmont.

It’s still too early to determine which team might have an edge in what’s expected to be the most competitive ACC race in years. Louisville, fresh off a Final Four appearance, has arguably had the most intriguing nonconference run so far, playing Cincinnati, IUPUI and Belmont — the last of which went down-to-the-wire before the Cardinals pulled out a 75-70 win. Hailey Van Lith has been on fire to start the season, but there are still growing pains as new players get accustomed to Jeff Walz’s system.

Louisville’s perimeter defense has been subpar in Walz’s eyes, and he was displeased with how his defense allowed the Bruins to easily get to the basket. Offensively, Van Lith hasn’t had a ton of help yet from Olivia Cochran, Chrislyn Carr or Morgan Jones, who are all averaging fewer than 10 points on fewer than eight attempts per game.

As a former All-ACC First Team player, Jones is a prime candidate to emerge as a more impactful scorer. “She’ll continue to get better,” Walz said after the Belmont win. “There’s no doubt in my mind.”

5. Big Ten battle could be more interesting than anticipated

Iowa was our unanimous preseason pick to win the Big Ten, but Indiana and Ohio State might get more serious consideration if we did the poll again now. The Hoosiers are coming off a huge win over Tennessee, a game in which Grace Berger was four assists away from a triple-double. Ohio State shined on the defensive end with its press against Tennessee, forcing 29 turnovers, while Rebeka Mikulasikova has been a great complement inside to the 1-2 punch of Jacy Sheldon and Taylor Mikesell.

All three teams are inside the top 12 in the latest AP poll. And no one’s saying Iowa is in trouble, but its overtime win over Drake — plus the persistence of the typical problems we’ve seen in recent years from the Hawkeyes, such as shaky defense or not enough help for Caitlin Clark and Monika Czinano — didn’t instill a lot of confidence.

6. Enough with the injuries!

Aijha Blackwell leads the Baylor Bears to victory over Incarnate Word with a 23-point performance.

Not even two weeks into the season, we’ve already had four of our preseason top 25 players miss time with injuries: Baylor‘s Aijha Blackwell, Horston, Harmon and Maryland‘s Diamond Miller (who only ended up missing one game, but it was a big one: vs. South Carolina). And that’s not including a slew of players who were deemed out for the year before the season even started.

Harmon (toe) and Horston (lower extremity injury) are considered day-to-day, while Blackwell’s status is unknown. Hopefully none of these issues last long-term, but their absences in big games is a bummer for fans and will make it tougher to assess nonconference résumés come March.

All the attention going into this 1-versus-2 matchup, rightfully so, will be on each team’s likely lottery pick — Aliyah Boston for the Gamecocks and Haley Jones for the Cardinal — or even the post showdown between Boston and Cameron Brink. One underappreciated matchup? How both teams fare with new point guards still finding their footing.

South Carolina is looking toward redshirt freshman Raven Johnson and graduate transfer Kierra Fletcher to replace Destanni Henderson. And following Anna Wilson’s graduation, the plan was for Jones to be the primary point guard for Stanford, but freshman Talana Lepolo earned the start the past two games, boasting 29 assists and 10 turnovers in 104 minutes on the season. Don’t overlook the importance this position group has in setting up the offense and getting their All-Americans the ball.

Gianna Kneepkens knocks down the triple

Stanford has breezed through its relatively easy nonconference opponents with a 46.6-point average margin of victory. But the Pac-12’s first win over a ranked squad didn’t come from the Cardinal: No. 25 Utah thrashed visiting Oklahoma (No. 16), which was on the tail-end of a back-to-back. Gianna Kneepkens, Kennady McQueen and Alissa Pili finished with 20-plus points apiece.

Arizona and Oregon also remain ranked at No. 18 and No. 21, respectively. It’ll be interesting to see how the Ducks, who are led by freshman Grace VanSlooten, do at the upcoming Phil Knight Invitational, where they’ll face North Carolina and either Iowa State or Michigan State.

The Big 12 was supposed to have a fascinating race, one where our panel predicted the Baylor Bears streak of 12 consecutive regular-season titles would end. So far, Iowa State has been the most consistent team, though Northern Iowa took them to the wire in the final seconds of a fierce intra-state matchup Wednesday. Texas looked vulnerable against UConn, but were missing Harmon, who makes the whole operation work on both ends. With her healthy, it’s a lot easier to see all their talented pieces starting to work together.

Baylor has dealt with a host of player absences/injuries, while Oklahoma could take a steep tumble in the rankings after getting trounced by Utah.

Iowa State and Texas likely still have the best chances at winning the league, but things could certainly get interesting. Texas might even be the favorite if its defense progresses to the level Vic Schaefer envisions.

Creme had Belmont — which received votes in the latest AP poll after nearly beating Louisville — as the Missouri Valley Conference’s automatic qualifier on Monday (Belmont lost 80-62 to Middle Tennessee on Wednesday). But is it possible the MVC ends up a multiple-bid league? He had Northern Iowa in the “Next Four Out” before they rallied late to take the lead over Iowa State before ultimately losing by three points Wednesday.

Drake also turned some heads with its overtime push against Iowa. Some upcoming matchups to keep an eye on: No. 22 Nebraska at Drake on Saturday as well as Belmont at No. 4 Iowa and No. 20 Creighton at UNI on Sunday.